Wishful Muffin, a Sacombe Wishful Thinking daughter out of Greenside Bella, sold for 5000 guineas at the British Simmental Cattle Society’s sale at Carlisle on Friday 25 April. 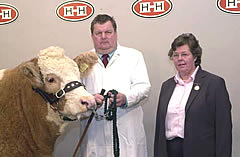 Bred by Mr and Mrs David Mills from Wellington in Somerset, Muffin has a Beef Value of SM30.
Muffin was Supreme and Female Champion and was purchased by Wesley Abraham for his Magheracrigan herd at Enniskillen, County Fermanagh, Northern Ireland.

Demand for Simmental bulls was also strong with all 14 bulls forward changing hands to level at £1950.

Leading the way again was David and Christine Mills’ Wishful Neff that sold for £2940 to Mr T Keel from Thirsk in Yorkshire.

Neff, with a Beef Value of SM29, is the April 2002 born full brother of Wishful Muffin, the Supreme Champion.

Beaghall Neolithic Man, coming with a Beef Value of SM25 from Messrs M Brears and Sons, Goole, North Humberside, sold for £2835 to Stobo Farms in Peebles-shire.

Annick Magnificent from Lauchlan Quarm, Irvine, Ayrshire realised £2730 with Miss McBryde from Lochmaben, Lockerbie being the purchaser of this Woodhall Dynamite son. 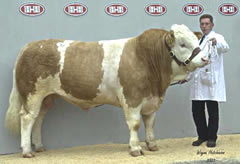 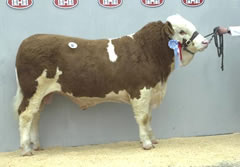 Blakewell Mercury, another entry form East Yorkshire, made £2100 for Mr and Mrs Ian Steele from Easington, Hull.Mercury comes with a Beef Value of SM24 and was bought by Mr EW Jolly, Rescobie, Forfar.

“It was excellent to see such demand for bulls and females alike,” commented Roger Trewhella, general secretary of the British Simmental Cattle Society.
“Although the entry was smaller than last year, the clearance level was complete amongst the bulls. With such a growing demand across the country, it is essential that our breeders maintain the improved quality that is now on offer. Well fleshed bulls of a good conformation will continue to meet the requirements of commercial beef farmers.”