Ballyclare-based breeders Leslie and Christopher Weatherup dominated the Simmental section at Balmoral Park for the second year in succession.

The father and son team who run the 35-cow Lisglass herd, claimed the male and supreme overall championship ribbons with their twenty-month-old stock bull Dermotstown Del Boy ET. Bred by Chris White from Dublin, he was sired by Kilbride Farm Newry, and was purchased privately at eleven-months-of-age. 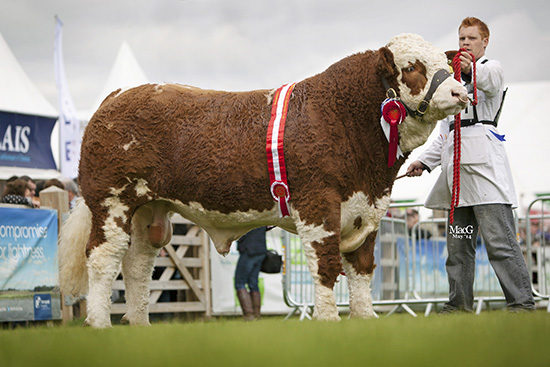 This bull has won a string of awards in Ireland, including the National Yearling Bull Championship at last year’s Tullamore Show.  Leslie Weatherup confirmed that semen is available for sale.

Scottish judge Gordon Clark, who runs the 40-cow Broombrae herd at Fife, said it was an excellent show with some particularly strong classes, especially the intermediate and junior heifer classes. He described the overall champion as an outstanding bull. “He has tremendous ring presence, excellent conformation, and is full of breeder character. “ 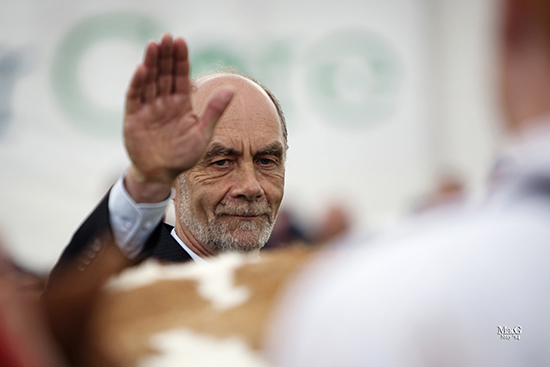 Claiming the reserve supreme award at the 146th Balmoral Show was Slievenagh Emperor, a March 2013 born bull bred by Robin and Darla Boyd, and sons Christopher and Jamie, Portglenone.   He also secured the junior, reserve male and exhibitor-bred championship titles. 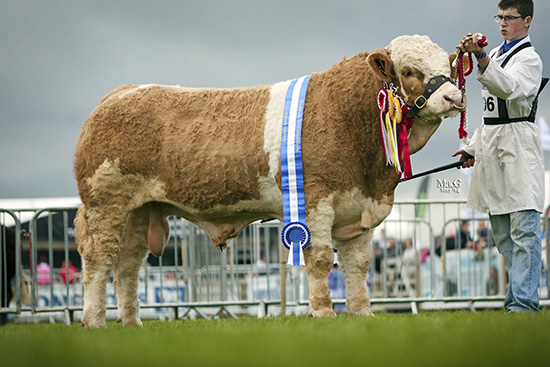 Sired by the 9,200 Euro Curaheen Apostle ET – a bull bred from North Amercian genetics, his dam is Slievenagh Aileen – one of 25-cows in the herd founded in 1979.

“The reserve champion is another excellent bull. He has length, great muscular development, and is a great prospect for the future,” added the judge.

The female and reserve exhibitor-bred championships went to Ballymoney Dora, an August 2012 born Celtic Rock daughter, bred by Noel and Mai Kilpatrick from Banbridge, who have made a return to pedigree Simmental breeding after ten years. The judge commented: “She is a lovely fleshy heifer, very feminine and full of breed character.” 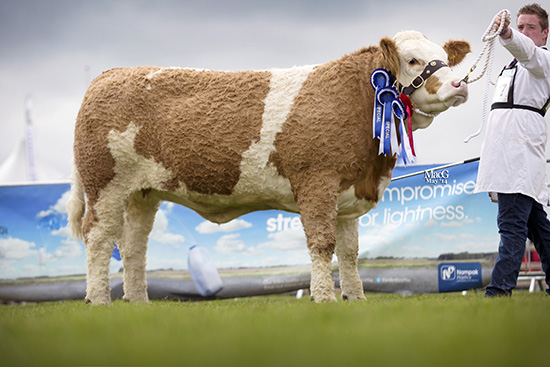 Standing reserve in the female line-up, and also taking the day’s reserve junior award, was Ballinlare Farm Empress, a January 2013 born heifer from Joe Wilson’s 60-cow herd at Newry. She is a daughter of the herd’s 20,000gns stock bull Auchorachan Wizard, and is out of a home-bred Milnafua Jordan dam whose sons have topped 4,200gns at Stirling. 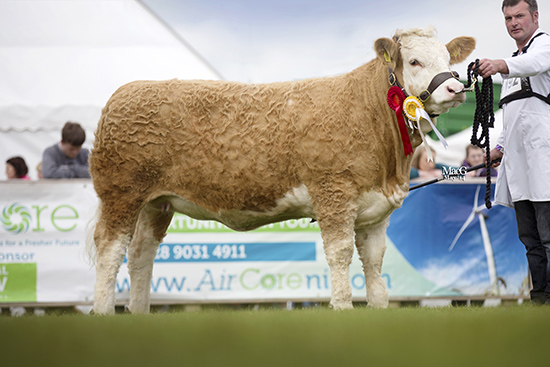 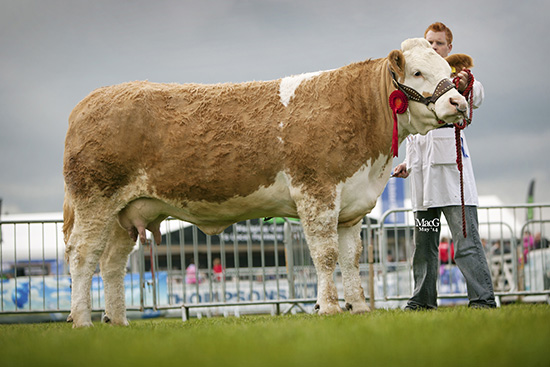 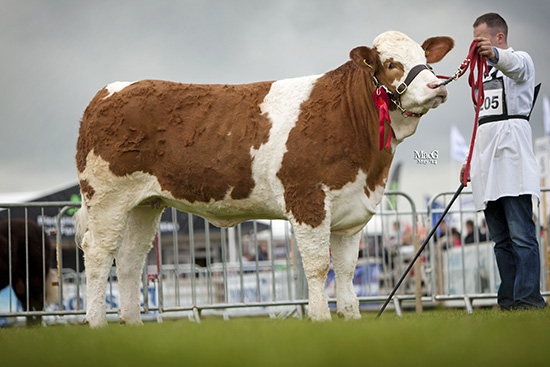 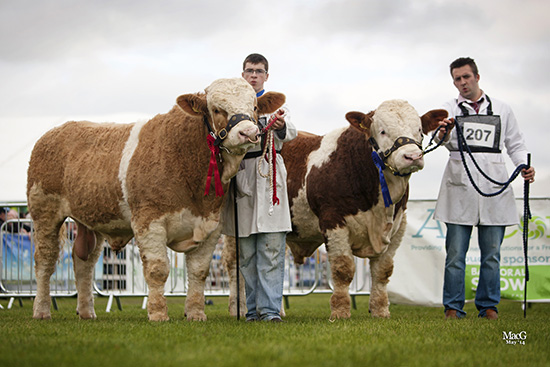 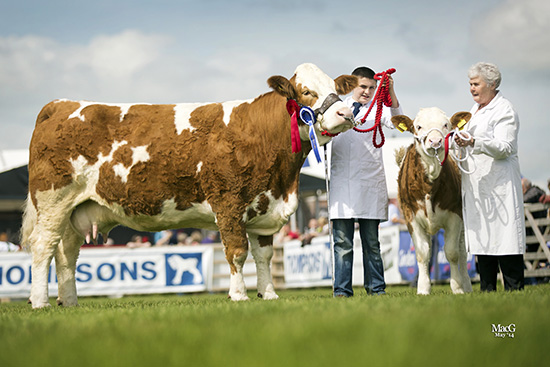 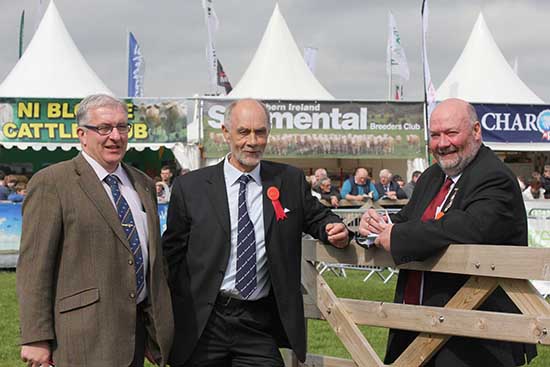 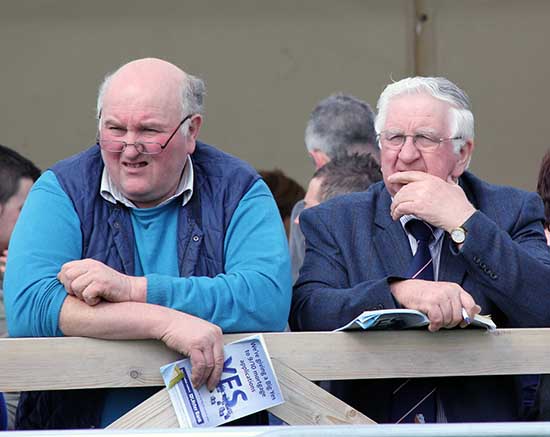 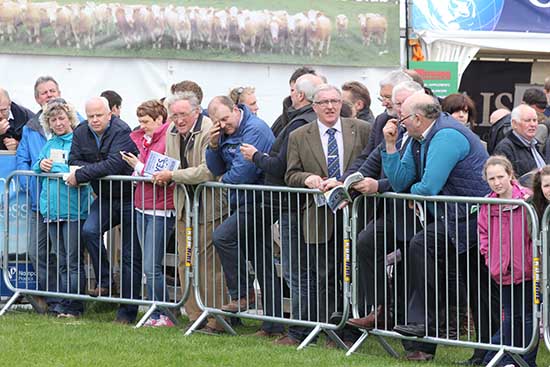