The Bosahan herd owned by the Olds family, of Constantine, near Falmouth, has been recognised by EBLEX as the Most Improved Herd of Simmental cattle in England for 2013.

The award is presented by the EBLEX Beef Better Returns Programme (BRP) to the recorded herd that shows the greatest genetic gain for commercial characteristics over a 12-month period. There is a separate award for each of 10 UK breeds.

Bosahan farm has been in the Olds family since 1964 and was a dairy enterprise for 42 years. However, due to a change in circumstances, they made the decision to sell the Trewardreva dairy herd in 2006 and concentrate more simply on the home farm, which is made up of 50 acres of permanent grassland and 20 acres of woodland. 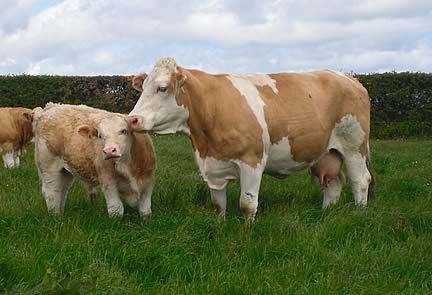 The Simmental herd was established soon after the dairy herd was sold when John, having been impressed by the temperament of the Simmental breed, purchased four second calvers. The following month, they came home from the Bristol Society sale with several additions to the herd, including a stock bull. These seven foundation cows went on to produce an impressive 17 heifer calves in three years.

John and Bridget aim to keep the herd at around 25 cows plus followers, as this suits the available housing and grazing. The herd currently numbers 28 cows, therefore, for the first time since establishing the herd, numbers will need to be reduced as winter approaches. Several more mature cows with their calves at foot will be sold over the next few months to make room for autumn calving heifers. Their bloodlines will continue to be represented in the herd by their retained daughters and, looking ahead, they can be more selective about the heifers they want to retain.

Production cycle
The Bosahan herd calves from October through to March, with the calving period being spread out as a result of purchasing cows in calf. As a result, cows are bulling and are served at different times of year. Heifers are calved down at around two years and nine months old.

While they are housed over the winter, the cattle are fed home-produced silage, supplemented with concentrates. Creep feed is offered to calves from around 12 weeks old and are weaned at around nine months old. Once bull calves are weaned, they are housed on woodchip and fed through an out of parlour feeder, which enables individual rations to be tailored to each animal’s appetite. At around 12 months of age, John and Bridget decide which are suitable to sell as breeding stock bulls, the remainder are finished within the next couple of months.

Ideally, all cattle are turned out in April and the bull kept with those he has recently served or who are still to go to him. At that stage, all cows are pregnancy diagnosed and pregnant cows are turned out separately. Fertility is an important consideration for commercial breeders and the mature cows in the Bosahan herd have an average a calving interval of 384 days.

Guided by the figures
John and Bridget have been performance recording the herd since 2009, as they believe that the figures help guide the herd in the right direction.

They initially began submitting weights then, in 2010, incorporated scanning to help identify which female families are producing the progeny with the best beef carcases. Now all youngstock within the herd are scanned in order to give more detailed information about the true potential of a sire or dam.

In terms of the important traits within the herd, John and Bridget aim for average calving ease and like calves from mature cows to weigh around 50kg. They believe 400 day weights are important and market bull beef at 13 to 14 months, by which time the animals weigh around 750kg and are killing out at around 55 per cent. Retail beef yield and eye muscle scores are also helping them successfully manage their finishing beef.

Having recently begun monitoring and selecting for milk figures, particularly in relation to heifer replacements, they are seeking improvements in the females’ ability to rear their calves.

The herd uses a stock bull, as well as a small amount of Artificial Insemination (AI). The present stock bull, Skerrington Armada, is serving the herd well, according to John.

“He is producing good-natured progeny that grow quickly,” he said.

“Young bulls are finishing at 13 to 14 months and his daughters should develop into strong, nurturing mothers.”

A stock bull generally remains active within the Bosahan herd for around three years and then is sold on as a mature stock bull when his heifers are ready for breeding.

Developing sales
John and Bridget have only recently begun selling animals from the herd and to date have mainly sold directly off the farm to both commercial and pedigree breeders. As well as having their own website and doing a small amount of advertising, they aim to attend their local shows. The Royal Cornwall Show, where they have enjoyed success over the years, has proved to be an excellent shop window for their stock.

“There appears to be positive interest in the figures from both other breeders and producers, so hopefully our data will put us in a good position to develop our sales.”