Simmental breeders were out in force at Fermanagh County Show, as the popular red and white continental beef breed dominated the cattle section with an entry in excess of 70 exhibits. 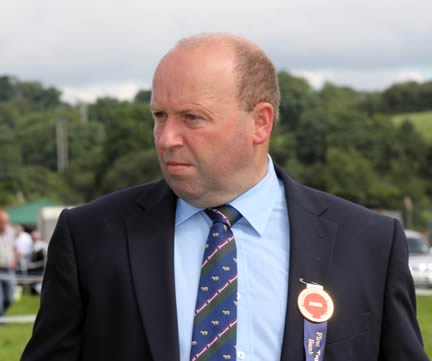 The bumper entry was judged by breed society president Iain Green from Scotland. He runs the noted 140-cow Corskie pedigree herd, alongside a 320-cow commercial enterprise, in partnership with his father Jimmy at Garmouth in Morayshire. “This is my first time judging in Northern Ireland, and I would like to compliment all of the exhibitors for putting on such a fantastic display of quality cattle. It has been a tremendous show!

“I have been astounded by the large numbers of quality animals in every class, several attracting entries in double figures. It’s definitely the best show of Simmentals I’ve ever seen, and it has been a great pleasure to judge them.” 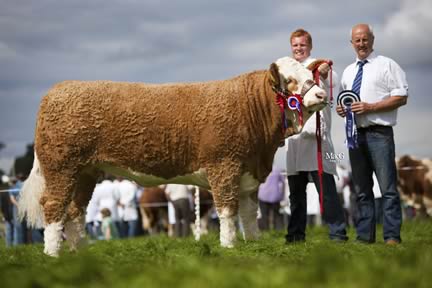 Mr Green awarded the day’s supreme overall championship to the October 2011 born Slieveroe Caroline, brought out by the father and son team of Leslie and Christopher Weatherup, who run the 40-cow Lisglass herd based at Ballyclare, County Antrim. Bred by County Cork breeder Adrian Bateman, she was purchased at Roscommon in November last year for 2,800 Euros.

Sired by Kilbride Farm Newry, and bred from Clonagh Willow, this intermediate heifer also claimed the female championship award. “This heifer caught my eye as soon as she entered the showring. She oozes power and breed character, and has a tremendous top and excellent locomotion,” explained the judge. 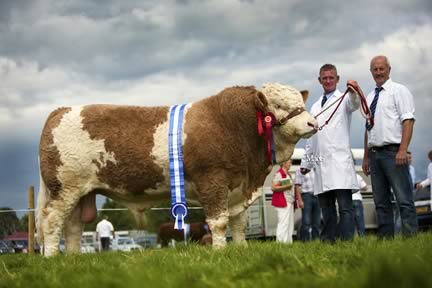 Standing in reserve supreme position was the male champion Killynure Darwin, bred by Raymond Porter, and wife Joan, from Omagh, County Tyrone, who established their 8-cow herd in 1983. He led a very strong line-up of ten junior bulls. Born in January 2012, this Omorga Murray son won was bred from Killynure Twinkle, and also scooped the prestigious DANI Rosebowl for the best performance recorded Simmental bull.

Iain Green added:”I was impressed with this bull’s sheer power. He has great breed character and good width all the way through.”

Making her showring debut, and claiming the reserve female championship was Luddenmore Artic Rosebud exhibited by Kenny Vetich from Lisbellaw, County Fermanagh. Bought privately fifteen months ago from Dr Michael Sheahan, Killmallock, County Limerick, she is one of six pedigree Simmental cows in Mr Veitch’s Drumlone herd. She was shown with her Samark Superman bull calf at foot. 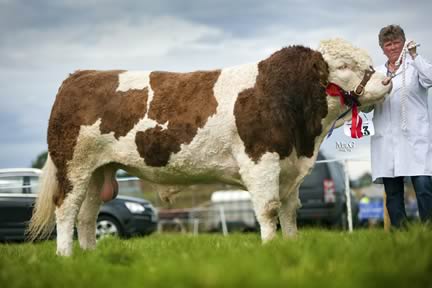 Reserve male champion was the October 2011 born Ballyvallough Captain bred by Andy Weatherup, who had travelled over 100 miles from Larne in County Antrim. Sired by Omorga Volvo, his dam is the home-bred Ballyvallough Sheila. 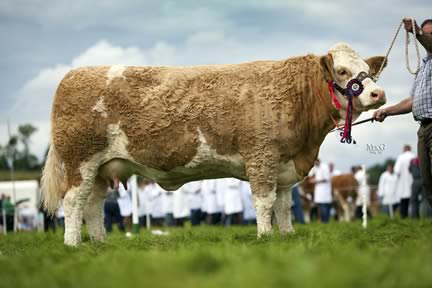 Fermanagh County Show in Enniskillen is the venue for the final of the hotly contested Ivomec Super Simmental Pair of the Year competition, sponsored by Merial Animal Health. Seven pairs of animals which had qualified at selected shows throughout the summer were competing for the plaudits. 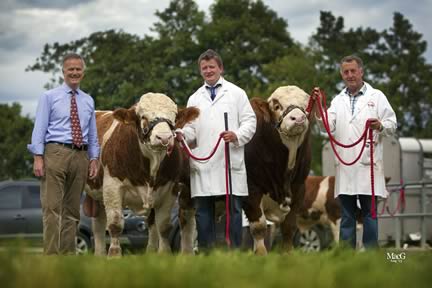 After much deliberation Iain Green tapped out Adrian Richardson’s junior bull duo, Cleenagh Dazzler and Cleenagh Darius, as the 2013 winners. This is the second year in succession that the Cleenagh herd has scooped the coveted Crystal Decanter and a 500mls pack of Ivomec Super injection presented by Philip Clarke of Merial Animal Health. 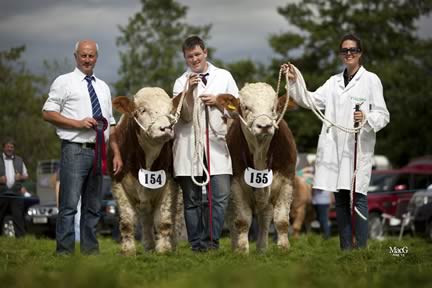 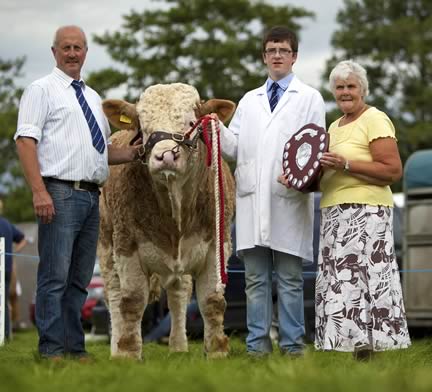 Club chairman Nigel Glasgow congratulated the prize winners, and thanked all exhibitors for supporting the show. “Enniskillen traditionally marks the end of the show season, and this year’s event was extra special as our club was hosting breed enthusiasts from throughout the UK and Ireland. Local breeders certainly pulled out the stops, travelling from all over the country to put on a large show of quality Simmentals.”

For more pictures from Enniskillen Show log on to http://www.macgregorphotography.com/