When it comes to breeding functional suckler cows with superior mothering qualities the Simmental is the ultimate breed of choice for County Down herd owners Brian and John Edgar. 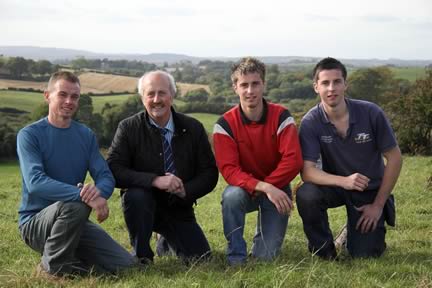 The Edgar brothers farm a total of 350 acres of owned and rented land near Tyrella on the outskirts of Downpatrick. The main enterprises on the farm include a 90-cow suckler herd, 300 commercial ewes, and a small flock of pedigree Texels. John’s sons, William and John, also take a keen interest in the business.

The farm is predominately grass-based with the exception of 45 acres of spring barley which is grown annually for feeding and bedding.

Simmental bloodlines make up more than sixty per cent of the spring calving herd. “We like easy managed cows with big frames and plenty of milk, and the Simmental ticks all the boxes,” said Brian. “We found it difficult to source good quality Simmental heifers, so in 2006 we decided to buy a Simmental bull and breed our own herd replacements.”

The first stock bull purchased was Ranfurly Romeo 2nd, a Salisbury Challenger son from David Hazelton’s herd at Dungannon. He was male champion at the NI Simmental Club’s show and sale, and turned out to be a sound investment as John jnr explained:”Romeo was a super bull with a nice temperament, and he produced excellent calves. We sold him when he was nine-years-old as there were six generations of his female progeny in the herd.” 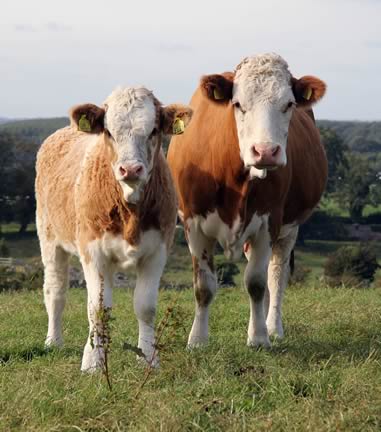 When buying a stock bull the Edgar family like an animal with length, good size for age, sound legs and feet, and good overall conformation and hindquarters. “Personally we like deep red coloured bulls because they throw nicely marked calves. We don’t put a lot of emphasis on performance figures, but if we like a bull on visual appearance and it has good figures then it’s a bonus,” added Brian.

“Romeo bred some tremendous daughters, like peas in pod, and they are the backbone of our herd today,” said William.

The Edgar’s are currently running two Simmental stock bulls on the farm. They are Lisglass Bionic ET, purchased at Dungannon in March 2012 for 3,300gns from Leslie and Christopher Weatherup, Ballyclare. This first prize winner is a Kilbride Farm Newry son, bred from the Carnkern Titan daughter, Cleenagh Hazel – full sister to the noted brood cow Cleenagh Daffodil.

The most recent bull to join the herd was Spelga View Champion, bought privately from breed newcomer John Jardine, Banbridge. Sired by Celtic Rock, he is bred from the Kilbride Farm Viduka daughter, Longbeach Amy, and is +5 for milk, and in the breed’s top 5% for terminal sire index +86 and self-replacing index +95.

Heifers calve into the herd at around two-years-old. John jnr said: “Simmentals are docile and easy to work with, and the calves are lively and growthy from birth. The breed’s fertility is also excellent, with a large percentage of the cows holding to first service.” 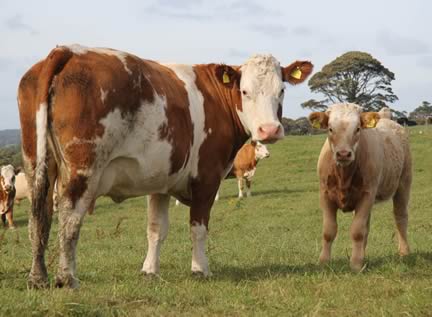 William added; “Cows and heifers are easy calved, and they have plenty of milk, and can easily rear twins. We like half and three-quarter-bred Simmental cows, and we use another continental bull to keep hybrid vigour within the herd and to stop the cows getting too pure.”

During winter the cows are housed in straw-bedded sheds, and fed a diet of silage, straw and minerals. They are turned out in March immediately after calving, and fed on grass until they are re-housed in late October or early November.

Calves are weaned at around eight-months-of-age, and divided into batches, bullocks and heifers. They receive silage and a specially formulated ration which is manufactured by a local miller using the farm’s home-grown barley.

Every year the best heifers are retained within the herd as replacements, while surplus maiden heifers suitable for breeding are sold privately to repeat customers for premium prices. The bullocks and remaining heifers are sold off grass as stores at around eighteen-months-old.

“It has been a great summer and the calves have been really thriving,”said John jnr. “We were thinking of selling some of the calves directly off the cows this year.”

Brian added:”The Simmental suits our system, and its dual-purpose traits make it ideal for producing females for herd replacements, while the bullocks are economical to rear and attract a ready market in the store ring. “