Simmental bulls to 3,400gns and heifers to 2,400gns at Dungannon 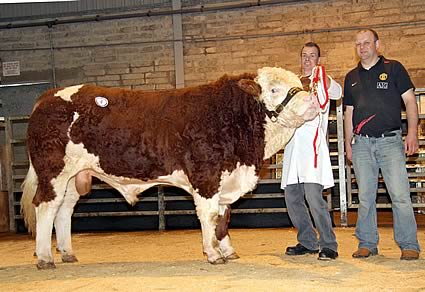 Topping the sale and setting a new herd record of 3,400gns was the March 2011 born Pointfarms Columbo, bred and exhibited by Frank and Matthew Cunning from Glarryford, County Antrim.

Sired by the Raceview King son Hiltonstown Warrior, he is bred from the Cleenagh Nelson daughter Pointfarms Vixen – one of 12 cows in the herd which was established in 2006. This third prize winning entry caught the eye of Jim Hewitt.

New breeder Stephen Millar from Newtownstewart, County Tyrone, who founded the 12-cow Glenrock herd three years ago, was making his debut in the show and sale rings, and was delighted to secure the day’s male and supreme overall championship plaudits. 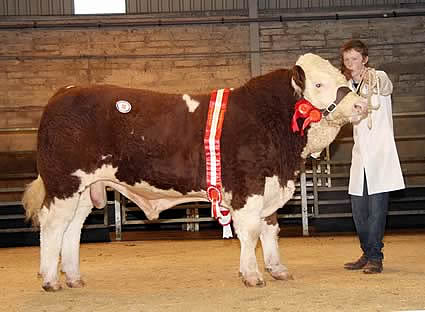 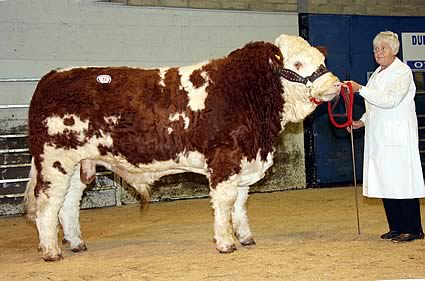 Following close behind at 2,500gns was the July 2011 born Woodford Crackerjack, bred and exhibited by Mrs Thelma Gorman from Armagh. Sired by Kilbride Farm Newry, he was bred from the Ballintlea King daughter Woodford Paula. Shown successfully during the summer, he was snapped up by Kenny Veitch from Lisbellaw, County Fermanagh.

Judge Thomas Hamilton, Rock, Dungannon, awarded the reserve championship to Knockreagh Conrad, a June 2011 born Omorga Volvo son, shown by the father and son team of Val and Conrad Fegan from Rostrevor, County Down. This one was bred from a Freighduff Brendan daughter carrying the Raceview prefix. He failed to meet his reserve and was withdrawn from the salering unsold.

“The champion and reserve complement one another very well. The overall winner is a super ended bull with good conformation, and carried himself well on sound legs and feet,” added the judge. 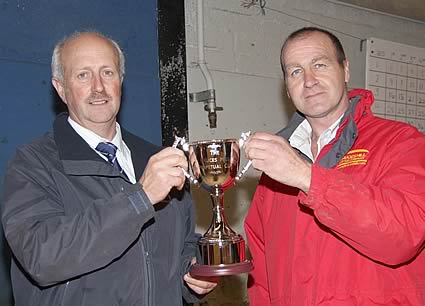 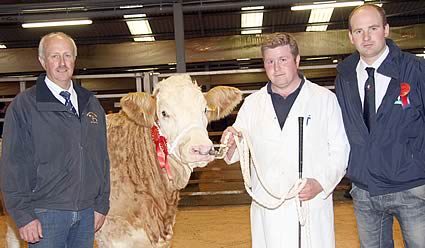 Pedigree females peaked at 2,400gns, paid to Cecil McIlwaine, Newtownstewart, County Tyrone, for the female champion Corrick Chelsea. Born in March 2011 and sired by Omorga Tarbuck, she is bred from the Hillcrest Naughty daughter Corrick Sunset, and is a full sister to Corrick Benson – intermediate and supreme Perth champion in October 2011. Buyer was Robin Boyd who runs the noted Slievenagh herd based at Portglenone, County Antrim.

Next best at 2,200gns was the fifth prize winning Sperrin View Crystal, a June 2011 born daughter of the 20,000 Euro Curaheen Tyson, out of a home-bred dam by Ballinlare Farm Rival. Consigned by William Ferguson, Stewartstown, she sold to Richard Booth.

The May 2010 born in-calf heifer Woodford Bluebell came under the hammer at 2,100gns for Mrs Thelma Gorman, Armagh. Sired by Sacombe Edgar, this second prize winner is bred from the Ballintlea King daughter Woodford Paula. In-calf to Kilbride Farm Newry, she sold to John Jardine.

The commercial section of the sale was kindly sponsored by McGirr Haulage based at Tempo, County Fermanagh. 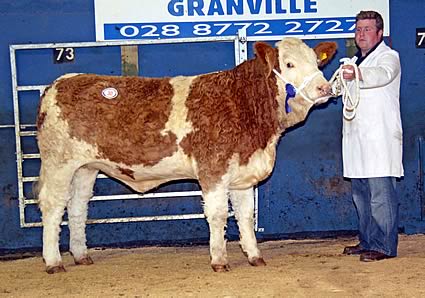