For producing quality beef the Simmental ticks all the boxes

Dennis Mitchell runs the family business at Station Farm, Thursford, Fakenham in Norfolk on behalf of the Mitchell Partnership Family Trust, and trust is exactly what they have put in Simmental for many years.

120 Simmental cows are split into two calving groups, half from mid January until the end of March and the back-end group from mid August until October. The enterprise runs on 260 acres of mostly meadow type grass (poor quality ground) with 75% of the grass in Stewardship Schemes. Straw is sourced locally on a straw in and muck out agreement. 350 tons of grass silage and 700 tons of maize silage are produced annually. The herd is run commercially but most of the cows are Pedigree Registered. 10% of heifers are retained annually and the herd is relatively young.

All cows are over wintered on a TMR.

Spring calving cows – calves are weaned in the middle of September, creep is introduced when the calves are two months old, it is a 16% protein finishing blend and maize silage is fed after weaning. Last year’s spring bull calves averaged 400kg with a top of 430kg dead weight, coming to an average of £1075 and a top of £1204, all were away before they were 13 months old. Heifer calves are also weaned in September, and then over wintered on a TMR containing grass and maize silage, minerals and protein balancer.

Autumn calving cows – bull calves weaned at the end of March at 7-8 months old then finished on the same finishing blend and maize silage, the silage intake is 7-8kg per head per day. 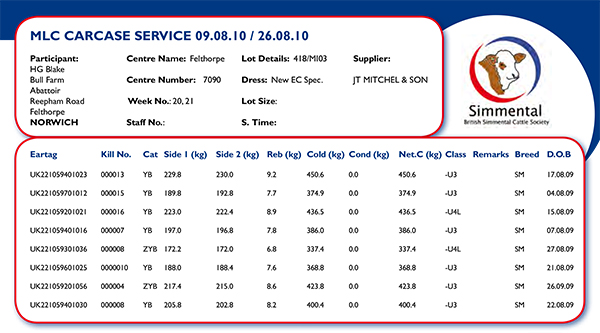 Heifers are also weaned in March, turned out onto grass then over wintered the following year in open yards on the same ration as spring born heifers.

The autumn bull calves are always slightly heavier and also younger than the spring born bulls when slaughtered.

3 or 4 bulls are retained every year and brought out for breeding. Some Heifers are sold privately off the farm.

Bulls are traded through H G Blake of Norwich. Live cattle are traded through Newark market with the majority at one sale in the spring. Sale toppers from last year’s spring store sales included 10 yearling heifers @ £1050, 10 of 14 month old heifers@ £1350

The minerals used at Station farm are specific to the farm to balance any deficiencies in the grass.

The herd is in the SAC cattle health scheme but they do not routinely vaccinate for anything other than regulatory blue tongue.

All females over 6 months are treated with a pulse release bolus and copper and selenium boluses before going to the grass and then dosed for fluke at housing and a low cost mectin wormer two weeks after housing.

The system is simple and profitable or as Dennis says “the cows keep me, not me keeping the cows.”

“As either a terminal sire or for breeding replacements the Simmental ticks all the boxes.”