Courance, home to the Jack family, is only a few miles north of Lockerbie and 30 minutes from Carlisle. The estate is made up of 5 farms totalling 1400 acres, all of which is farmed in hand. The land is ideal for cows and carries 300 Simmental x cows, 240 Spring calvers and 60 Autumn calvers. There are 8 Simmental stock bulls at present.

60 acres of cereals are grown for feed. The rest of the land is either grazing/cutting grass or rough grazing areas which provide natural shelter for cattle.

300 acres of first cut silage are made, and 200 acres second cut. Contractors are used for silage and combining, all other work is carried out in house.

The enterprise is managed by Raymond McKerlie with one more full time member of staff and as Raymond said “having Simmental cows allows us to run a large enterprise with only 2 staff members due to the Simmental’s quiet nature and ease of handling”.

The Cows are split across two main farm steadings, and each steading has winter housing for over 450 animals. All the commercial cows have high health status as does the pedigree 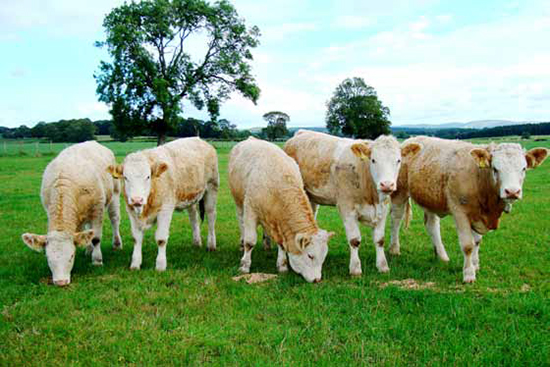 Spring Calvers – Calving starts on the 3rd of March and is relatively short as the bulls are withdrawn after 10 weeks.The cows having been overwintered on slats on a diet of silage/straw and minerals are moved to deep litter straw courts prior to calving. Once calved, they are moved outside as fast as possible normally 2-3 days post calving, male calves are castrated.

The land offers natural shelter allowing early turn out which in turn maximises profitability and efficiency. Creep is introduced towards the end of August and all calves selected for store sales are vaccinated in the Surecalf programme and sold at UA in Stirling in October and November. It is mainly the earliest calves that are sold at the autumn sales and Raymond said “compared to the Limousin cross calves as we had in the past the Simmentals are a minimum of 40kg heavier when we sell them or at today’s values nearly

Autumn Calvers – Calving starts at the end of July and again is tight, the bulls being in with the cows only 8 weeks, the Autumn herd was created to ensure a plentiful supply of replacement heifers for the spring herd. Cows calve outside on very bare land. Like the spring calvers the autumn cows are over wintered on slats with a bedded area for the calves, last winter sawdust was used as bedding and proved very successful reducing bedding costs by 20%. Cows are fed silage/straw and minerals and 1kg of barley in a TMR, calves are crept earlier than the spring calves and are self weaned before turnout.

This extremely efficient operation is based on the values of Simmental cross cows being good fertile and natural mothers producing calves that are easily got and then grow very fast.And as  Raymond  said  “Simmental cows work with you, and most importantly, for you.”