The inaugural Simmental Society ‘Leading Ladies’ Sale of pedigree females, held at Carlisle, experienced a blistering trade, with 100% clearance for the entries on offer.
Top call of the day was 13,000gns for a heifer and calf unit consigned by B & E Chadwick, Derbyshire. Chadstone Tollies Delight 6th, a Camus Brandy daughter out of a Dirnanean Jacob dam, sold with her Omorga Volvo sired heifer calf at foot and was knocked down to Hunnyhill Farms, Newport, Isle of Wight.

Following at 7,300gns was 16-month old maiden heifer Corskie Cherry, from WJ & J Green. She is sired by Ballinalare Nightrider and descends from a family line packed with notable show winners, and claimed a 3rd prize ticket at this year’s Highland Show herself. Boasting the highest figures in the catalogue, with a TSI of +83 and an SRI of +93 (both in the top 5% of the breed) she also travels to the Isle of Wight to join the Hunnyhill herd.

At the same money was Sacombe Corona-Kleeb from Mr & Mrs PB & JA Borlase. This 16-month old maiden heifer is a daughter of stock sire Grangewood William and comes from the herd’s noted 7-generation ‘Kleeb’ family line. She also heads to the Hunnyhill Herd, Isle of Wight.

The pre-sale show Supreme Champion, Boars Head Meierisli 5th, then sold at 5,600gns. She is sired by Seaview Prince Charming and arrived at the sale having won a string of 1st prizes from the show circuit; including Kent County and the South of England Shows. She was knocked down to John Gough, Ellerton Grange, Shropshire.

The Hunnyhill herd’s purchasing continued with a 5,000gns call for Woodhall Billi, a 2-year-old heifer from Hector Macaskill. She is sired by the homebred Woodhall Volcano, a Corrick Kentucky Kid son and is out of a homebred Mackney Hector daughter. 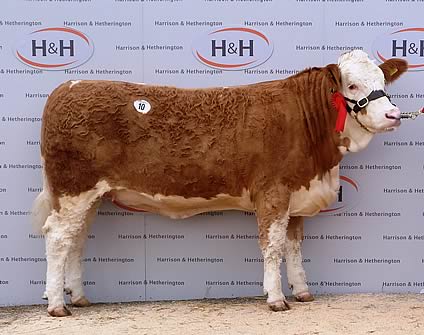 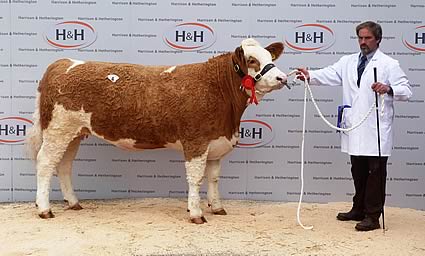 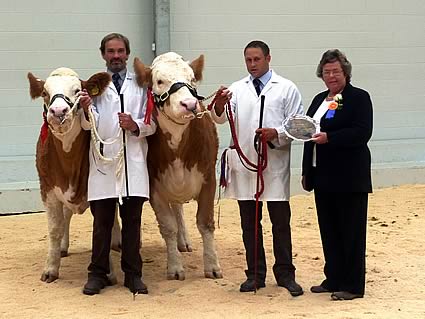