An absolutely fantastic show with some really strong classes was how County Cork judge, Keith Vickery, described the Simmental entry at Enniskillen Show.

“The junior heifer class was very strong, featuring a number of exceptional heifers at the top of the line-up – real prospects for the future! I believe that some of the best Simmental genetics in the world are owned by breeders in Ireland and Scotland, and this was evident by the quality of cattle presented to me today,” said Mr Vickery who runs 20 pedigree Simmental cows in his Roscarbery herd.

“It has been a pleasure to judge this year’s show. Exhibitors have brought out a mix of very good cattle in all classes. The junior bull class had twelve entries, and there were some very smart young calves to choose from.”

The County Fermanagh Farming Society event marked the end of the 2011 provincial show season, with Simmental breeders travelling from throughout the country to compete for the plaudits at the Ivomec Super Simmental Pair of the Year final. The results of the Northern Bank’s prestigious Male and Female of the Year competition were also revealed at the one-day show.

“This is a super senior bull. I saw him in Stirling at the bull sales last year and he has matured into a good muscly bull. He’ll never be the biggest, but he is hard to match for muscle, breed character and style.”

Lifting the reserve supreme award was the female champion, Clonguish Bambi, owned by brothers Shane and Paul McDonald from Tempo. “This is a super show heifer with power and style, and she was sparkling on the day,” added the judge.

The prestigious Northern Bank Male and Female of the Year competition has been running since 1997. The winners are determined using a points system which has been running at various nominated shows throughout the summer. 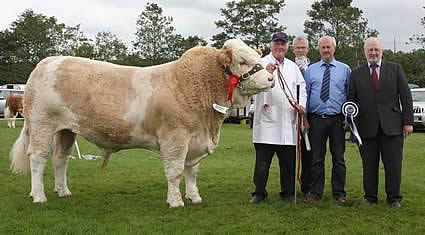 The 2011 Male of the Year award was won by David Hazelton’s junior bull Ranfurly Barrister. This 19-month-old home-bred entry was sired by Whitemire King Kong, and is bred from the Raceview King daughter, Raceview Mandy Beauty – full sister to Raceview Merle Beauty, dam of the record 20,000 Euro Curraheen Tyson.

Throughout the show season he was unbeaten in the junior bull class and secured six successive reserve supreme championship titles, and the reserve male championship at Enniskillen Show. 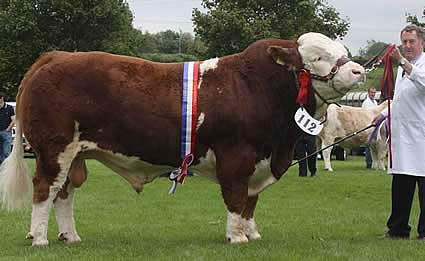 Messrs Richardson and Nelson won the Reserve Male of the Year Award with Drumlone Anchor. This May 2009 born bull made his debut at Omagh Show and has four successive supreme titles to his credit. Bred by Kenny Veitch, Lisbellaw, he was the junior and supreme Perth champion in October 2010, and was purchased by his new owners for 10,000gns. Sired by Seigfried, his dam is the Freighduff Brendan daughter, Broomfield Treasure – 2008 Reserve Female of the Year. 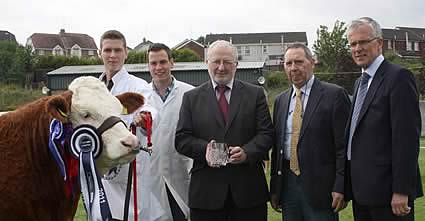 The 2011 Female of the Year award was won by the McDonald family’s Clonguish Bambi, who had attained a full complement of points during the show season. This heifer needs no introduction, having secured the supreme championship titles at Balmoral, Ballymena, Ballymoney and Armagh shows, the reserve overall award at Omagh, and the reserve female title at Clogher. This stylish February 2010 born heifer was sired by the noted Raceview King. 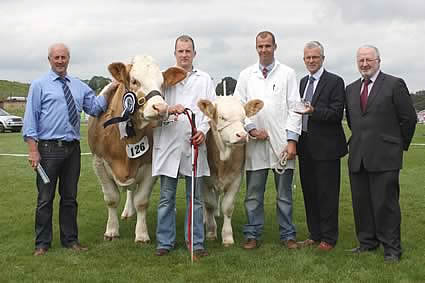 Claiming the Reserve Female of the Year title was Ranfurly Weikel 3rd, a home-bred junior cow from David Hazelton’s herd in Dungannon. This February 2008 born Hillcrest Champion daughter was accompanied by her Blackford Harvester heifer calf. She was unbeaten in her class and was reserve female champion at Balmoral, Armagh and Castlewellan shows. Ranfurly Weikel 3rd was the Female of the Year in 2009, and runner-up in 2010.

Northern Bank’s head of agriculture, John Henning said:”Northern Bank is delighted to be associated with the NI Simmental Club’s Male and Female of the Year competition. Congratulations to the winners, and all of the exhibitors who have put on a tremendous show of Simmentals throughout the summer shows and at the final.”

Traditionally Enniskillen Show hosts the final of theIvomec Super Simmental Pair of the Year competition. Seven pairs which had qualified at various shows in the past few months were paraded before Mr Vickery. 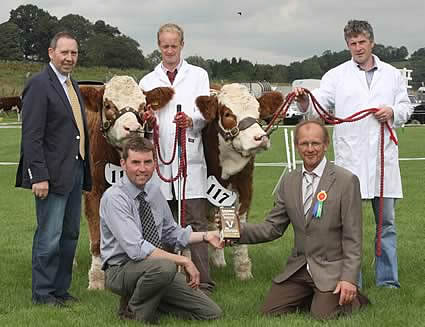 The Ivomec Super Simmental Pair of the Year award was won by John Moore from Beragh, County Tyrone. The winning pair comprised of Omorga Saffron 2nd and Omorga Bambi 5th which had qualified at Clogher Show. These home-bred heifers are daughters of Cleenagh Flasher and Dripsey Super King.

A delighted John Moore said that this was his first outing to Enniskillen Show. His 25-cow herd traces back over 30 years, and has chalked up considerable success in recent years.

Keith Vickery said: ”The winners are two exceptional heifers in their own right, but I picked them because they are a matching pair, and well balanced for size and colour. ”

John Moore received the Perpetual Crystal Decanter and a 500mls pack of Ivomec Super Injection – an endectocide which kills fluke, worms and external parasites in one injection. 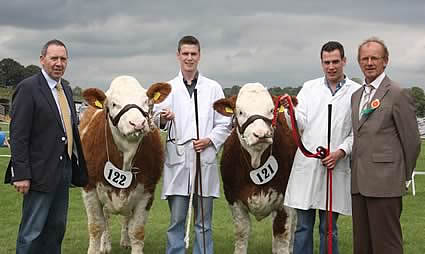 NI Simmental Cattle Breeders’ Club chairmam, Pat Kelly, congratulated the winners and presented the qualifying finalists with a 200mls pack of Ivomec Super. The Ivomec Super Simmental Pair of the Year competition is now in its sixth year and is kindly sponsored by Philip Clarke of Merial Animal Health.

Mr Kelly concluded: ”Its been another great show. Thanks to our judge Keith Vickery, and to our valued sponsors, Northern Bank and Merial Animal Health, without whom these competitions would not be possible. ” 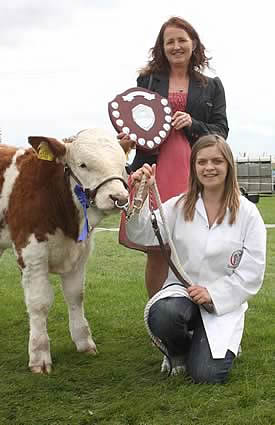 Zara Stubbs, Irvinestown, received the Young Stockperson of the Year Perpetual Shield from Mrs Caroline Vickery; while John Moore’s April 2010 born Omorga Bermuda was the winner of the DANI Rosebowl for the best performance recorded bull. 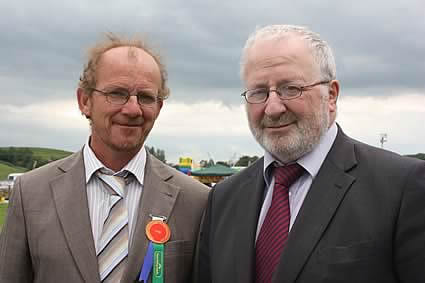