MAINTAINING FEMALE QUALITY
AND A COMMERCIAL PERSPECTIVE ARE THE

It was using Simmental bulls on their commercial herd and witnessing the benefits of the breed first-hand that encouraged the Stronachs to establish their pedigree herd back in the early 1980s – and in the subsequent years, they’ve continued to keep the commercial aspect at the forefront of their breeding policy.

Stewart Stronach explains: “We noticed a huge difference after we started to use the Simmental – the heifers were growthier and went on to make great cows and the steers had far quicker growth weights. The great appeal of the breed is that you get milky, productive females that also produce fast-growing calves.”

Stewart is the fourth generation of Stronachs to farm at Maisley in Keith, Banffshire, where he’s based with partner Fiona Sutherland, and their family including Michael, Ellie, Lauren, Aimee and Emma. Along with Fiona and Michael, the farming partnership includes Stewart’s parents, Stewart Snr and Hazel, who reside along the road at Berryleys Farm.

The Stronachs have gradually increased their owned land over the years and are now farming 760 acres in all, with 160 acres of barley grown within that, mostly for malting with some kept for feeding. On the stock side, 300 cross sheep are put to Texel and Charollais sires, with the lambs finished at home off grass, while the 200-cow herd includes 160 pedigree females and 40 commercials.

“We like cows that can look after themselves as well as their calf; a medium sized, commercial type cow is ideal for us.”

Running a closed herd other than bulls, the Stronachs have only ever bought in a few pedigree females, with the first being Maryculter Lucinda, almost 40 years ago. Another fortunate purchase around that time was Drumsleed Amelia, which was flushed to Gretna House Supersonic, producing 18 calves.

Stewart says: “We kept all the heifers from that flush, which provided a real solid foundation for the herd; they made great cows. The health benefits of having a closed herd are really

important to us – we’ve been Johne’s and BVD accredited for 12 years and the cows are screened for Lepto and vaccinated for IBR.”

With that strong foundation of females, the Stronachs have relied on selecting the right bulls to improve and develop the herd. Darsham Lucky Strike was a purchase with growth and style, which left his stamp, and then Curaheen Bandit, which Stewart says bred particularly strong females. “Our herd is now dominated by Bandit cows. They seem to click well with any bulls.

“We like cows that can look after themselves as well as their calf; a medium sized, commercial type cow is ideal for us.”

Five years ago, the Stronachs bought Ranfurly Confederate at the Dirnanean dispersal, having liked him when he was originally sold at Stirling. He has been popular for semen sales and has also bred exceptionally well in the Islavale herd, with the first crop of sons selling to 24,000gns for Islavale Heston, in February 2018, while another son, Islavale Harvest made 16,000gns.

Two other recent stock bulls that have sired several five-figure priced sons for the herd are Curaheen Giant and Atlow Dixon. Giant was bought at Roscommon in 2016 after Stewart had placed him Junior Champion at the pre-sale show. His first seven calves averaged over £9000, selling to a top of 16,000gns.

Dixon had been placed overall champion at Stirling in February 2014, before the Stronachs bought him for 15,000gns, impressed by his ‘length and style’. His sons have also proved popular, making up to 14,000gns.

“There are a few factors that we consider when buying a bull – the look, the pedigree and its health status are all very important. We then look at the figures and make an informed choice – we wouldn’t buy a bull with particularly bad figures.

“In 2017, we bought Corskie Highlander privately from the Green family and we’re really pleased with how he is breeding. We sold the first son off him last October at 15,000gns and his first crop of heifers are calving at the moment – they’re shaping up to be really nice cows, easy calving with plenty milk.

“To increase potential buyers of bulls, since 2014, all our bulls for Society sales have been individually tested clear of IBR and not vaccinated, in case an AI Centre shows an interest, as we’ve missed out on sales in the past due to vaccinating them,” adds Stewart.

Other than pre-sale shows at the bull sales, Stewart says showing has never been a passion of his and he feels that sometimes, over-fed show animals can give the wrong impression of the breed. However, his family are now very keen on the show-ring and he gets a lot of satisfaction out of seeing them do well – which they have done, with wins including overall Simmental champion and reserve inter-breed at Turriff in 2018; male champion at the National Show at Perth in 2017 and inter-breed champion at Keith the same year.

The girls have had a fair bit of success at Young Handlers competitions too, with Aimee winning the overall title at last year’s Stars of the Future show and Emma finishing third.

Fiona says: “We really enjoy showing at the Stars of the Future; it’s good training for the bull sales. The girls love being hands-on and Simmentals are a great breed for that, they’re very quiet.”

Back at home, calving is split between two quite tight periods in late autumn and then again in the spring, with 100 cows calving each time. Spring calving cows are outwintered, brought in for calving and then straight back out once they’ve calved. Those calving in the back-end are brought in just before, in October and kept in all winter on a silage and straw ration. The majority of straw used is home-grown. 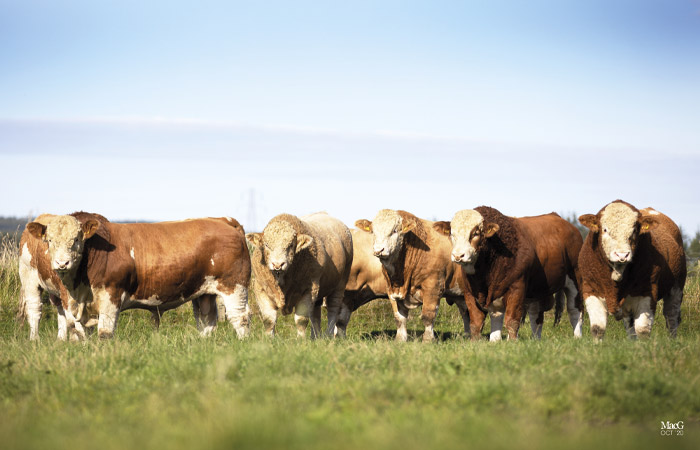 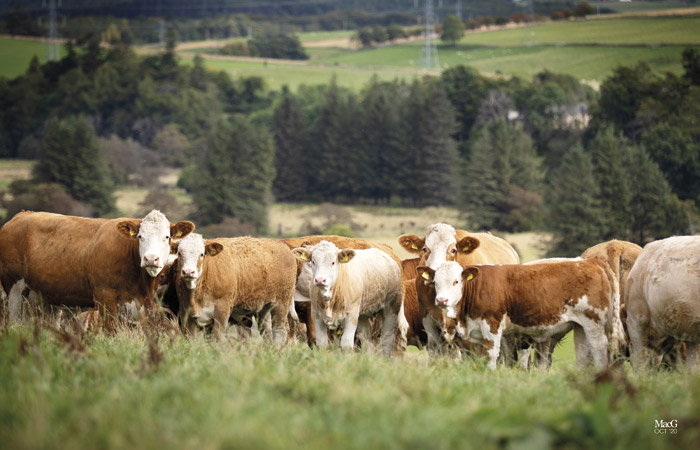 back-end are brought in just before, in October and kept in all winter on a silage and straw ration. The majority of straw used is home-grown.

Stewart explains: “Our ground is very heavy and the cattle can make a mess of it in the winter, which is why we keep the back-end calvers in. The cows receive a bulling mineral and then a pre-calving mineral.”

Maintaining the quality of the females in the herd is a priority for the Stronachs. They have always been very selective with which ones they breed from, but they now find the Society’s female classification system extremely helpful.

“I think the demand for Simmentals continues to rise because the breed is continually improving – in weight gains and calving ease. They are as milky as ever, but with improved carcases…”

“I think an outside opinion is always useful, for any breeder, and having the classification system increases buyer confidence too. Anyone can say that a bull is out of their best cow, but this helps prove how good the females are,” says Stewart.

Within the Islavale herd, there are more than 50 Excellent cows, with most of the others classified as Very Good. The policy is to keep a fairly young herd, with the aim of constantly improving the females, and with a strong cull cow trade at the moment, this also works in their favour.

Heifers not being retained for the herd are often sold privately for breeding, with lower-end heifers popular as recipients for embryos. Male calves are all kept entire, with anything not making the grade fattened on a barley beef system and sold through ABP at Perth, often making 400kg d/w at 13-months-old.  Stewart says: “There is always plenty demand for breeding females. The Simmental cow is by far the most dominant suckler cow in this area – they make great mothers and you can use any bull on them to produce what you want for your system.”

This year has been one like no other, with online bidding becoming the norm and restricted buyer numbers at sales, however, the Islavale bulls have continued to prove popular, both online and at the market. At the Stirling sale in October, their six entries averaged £8890, with Islavale Kristoff (a Corskie Highlander son) and Islavale Kai (by Curaheen Giant) making 14,000gns apiece.

“I think the demand for Simmentals continues to rise because the breed is continually improving – in weight gains and calving ease. They are as milky as ever, but with improved carcases. It is worrying times at the moment, but we certainly can’t complain with how the sales have gone this year,” adds Stewart.