TO THE US BEEF INDUSTRY 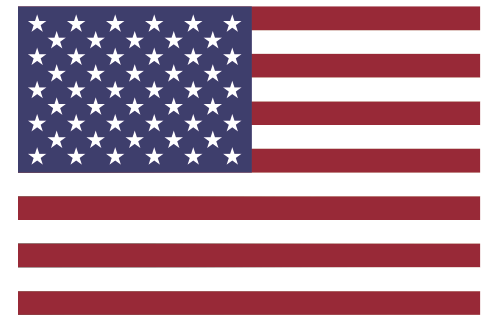 Giving a report on the work of the American Simmental Association (ASA), and the Simmental breed in the USA, we are delighted to have Fred Schuetze, ASA Trustee and President of the World Simmental Fleckvieh Federation, as a contributor in this year’s Review.

First, I would like to congratulate the British Simmental Society, for reaching the 50th year milestone of servicing the Simmental breed and its breeders. It is an accomplishment only reached by a few and you and your breeder members must be proud.

cattle that had very little growth and the cost of production was becoming too extreme to maintain. Everyone was looking for the ‘silver bullet’ to save the industry from the ‘belt buckle cattle’, as they were called.

The success of the American Simmental Association has to be credited to the founding fathers, which is true for all Societies that have survived.  Each, has to determine what the Society’s role is to make the cattle sustainable, which in turn makes their membership successful.

In the 1950’s, performance testing was taking hold of the beef cattle industry but it was not till 1968 that the Beef Improvement Federation was formed to set the standards for this new form of producing livestock in the US versus the show ring for selection. Even though the first Simmentals were imported to the US in 1886 & 1887; the importation of Parisien in 1966 making semen available to the US, opened the doors for performance minded breeders to start the use of Simmental genetics in the US. This was done through artificial insemination of all breeds to produce the first ½ bloods which increased weaning weights by over 100 pounds and the race was on, with the formation of the ASA, based on performance testing, as dictated by the founding fathers.

The ASA has taken a different approach, compared to many other associations, as to how they effectively have developed programs to meet the needs of the beef industry in the US. Along with maintaining pedigree and performance data for the membership, there has been the development of the first genetic evaluation that incorporated other breeds to the current single step system that uses DNA to help increase accuracies. The thought of cooperation with other breeds has led to the world’s largest beef data base of over 16,000,000 records. The IGS (International Genetic Solutions) system has allowed a collaboration of records and breeds that have increased the accuracies of the total genetic evaluation for a vast majority of the beef cattle industry not only in the US but with records from Canada and Australia. The ultimate goal is to better serve both the purebred and the commercial industry around the world, which is our final customers in the purebred business besides the end user the consuming public. 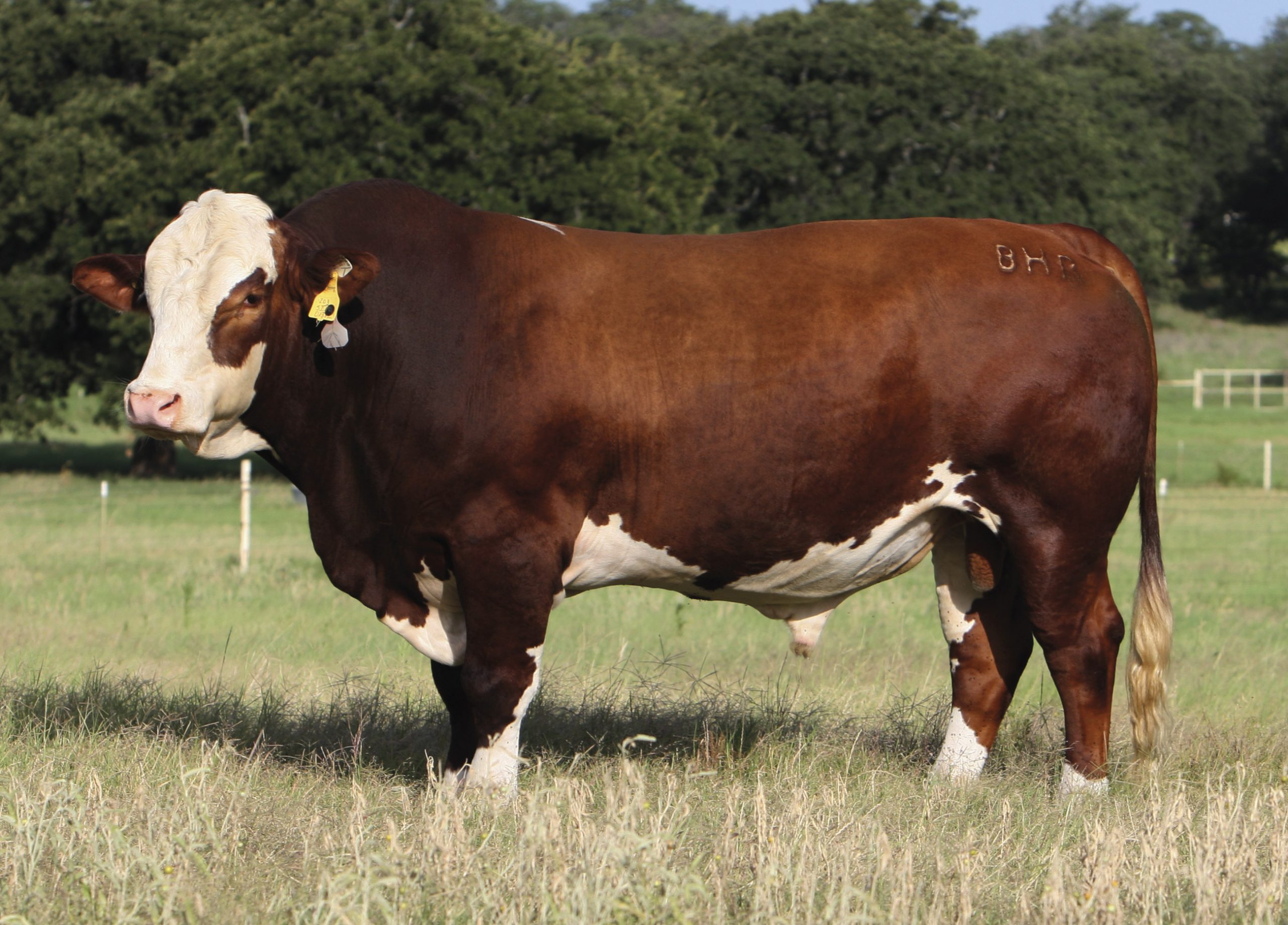 ¾ Simmental, ¼ Brahman, Simmental ½ Brahman and vise versa, to SimAngus HT’s that carry a percentage of Brahman for heat tolerance.

“The popularity of the Simmental breed, across the commercial industry which drives the pedigree industry, is because of the genetic trends and the ability of the association to put programs in place that affect the bottom line of the producers.”

The Simmental breed, depending on who you ask, ranks 3rd in the overall population in beef cattle in the US and is by far the largest of all the continental breeds that were imported in the late 1960’s. The popularity of the Simmental breed, across the commercial industry which drives the pedigree industry, is because of the genetic trends and the ability of the association to put programs in place that affect the bottom line of the producers. Programs such as:  the collaboration with other breed associations in IGS which produces multibreed genetic evaluations, the only one to do so;

carcass merit programs to enhance carcass quality; a commitment of $700,000.00 (approx £516,000) over a 5 year period to expand carcass data; the ability to register and track percentage Simmental cattle;  a tremendous junior program, 2786 members strong which not only focuses on the show ring but on leadership development and genetic evaluation; total herd reporting that produces 75% to 80% of all the data with meaningful contemporary grouping, and finally a board of trustees and staff that work tirelessly on keeping SIMMENTAL in the drivers seat.

Another great asset is the ability to do 100% of the breeders’ work online with the most advanced computer program in the industry. The last strength of Simmental in the US, as well as around the world, is there ability to adapt to different climatic conditions and management practices.  As I stated earlier, the success of a breed is due to its acceptability in the commercial industry and this is accomplished by producing cattle that meet the needs of the commercial industry. The success of the Simmental breed in the US can be directly attributed to the two graphs that I have attached: MATERNAL TRAIT GENETIC TRENDS and TERMINAL TRAIT GENETIC TRENDS. I believe the graphs are, self- explanatory, as to why the Simmental breed is so successful in the US along with other countries involved in IGS, which is just a DBA for the American Simmental Association. In general the graphs show that within the Simmental gene pool there is both maternal and terminal genetics and these have been blended so that both are available in one breed. 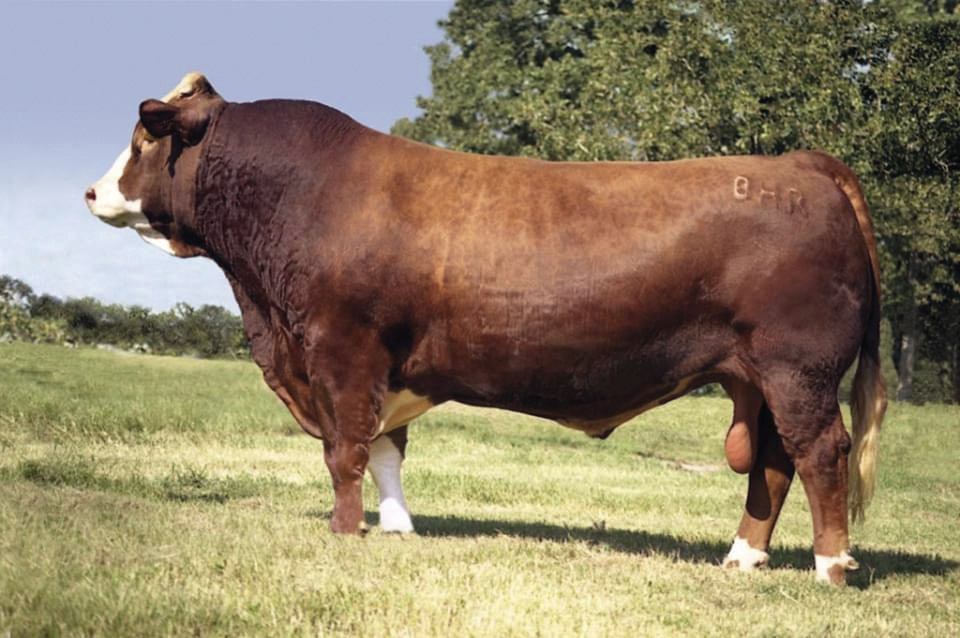 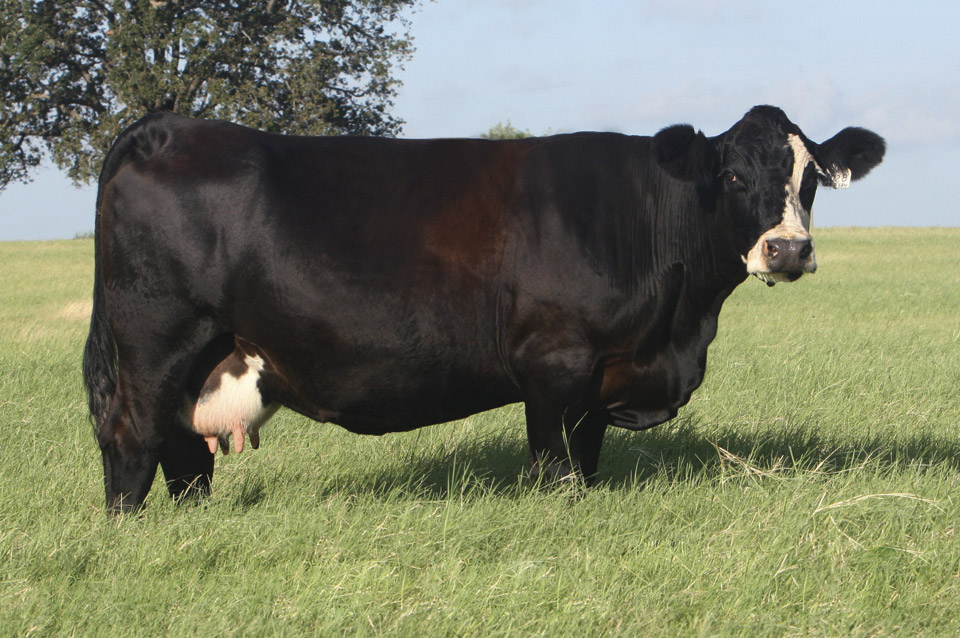 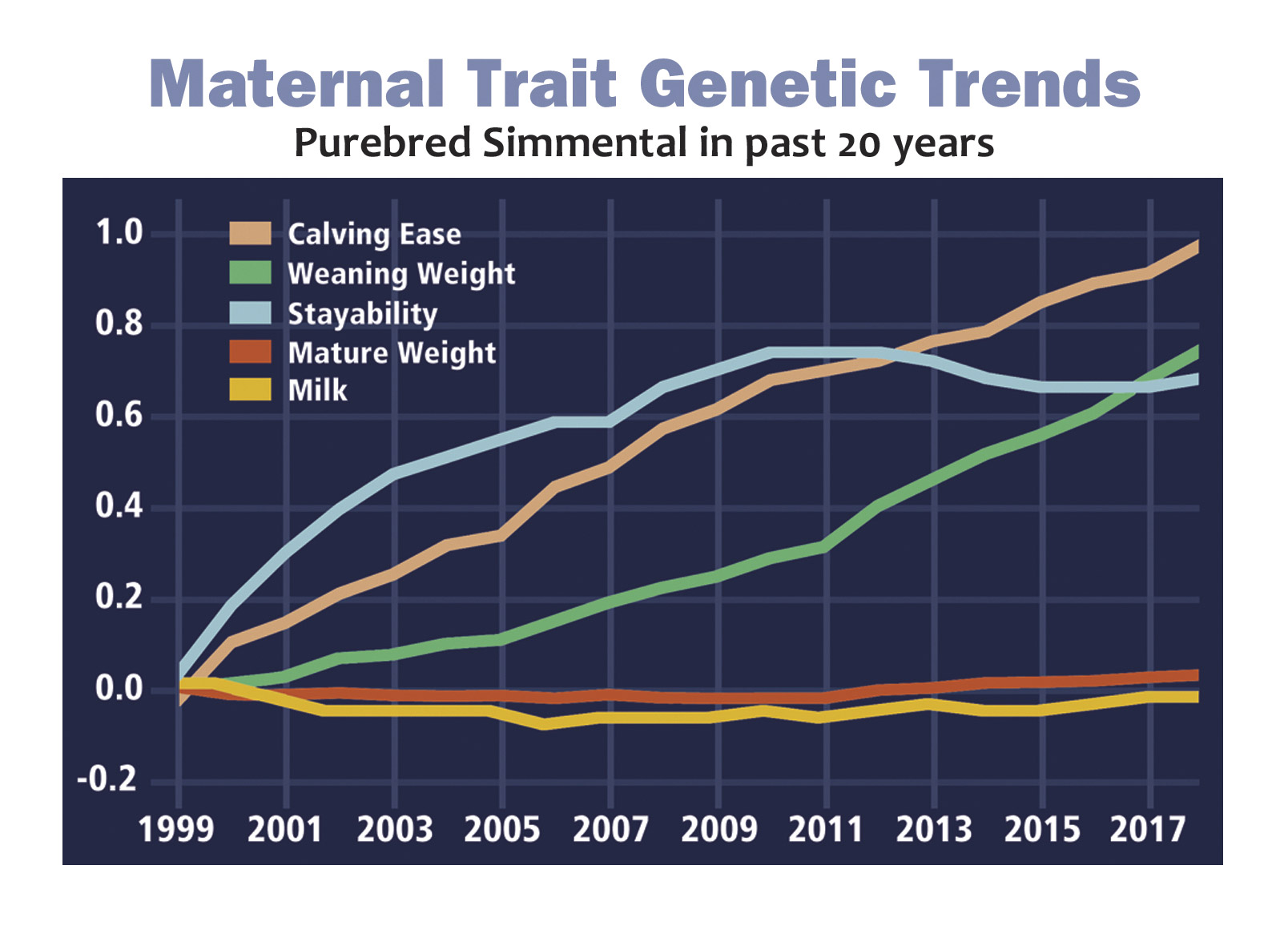 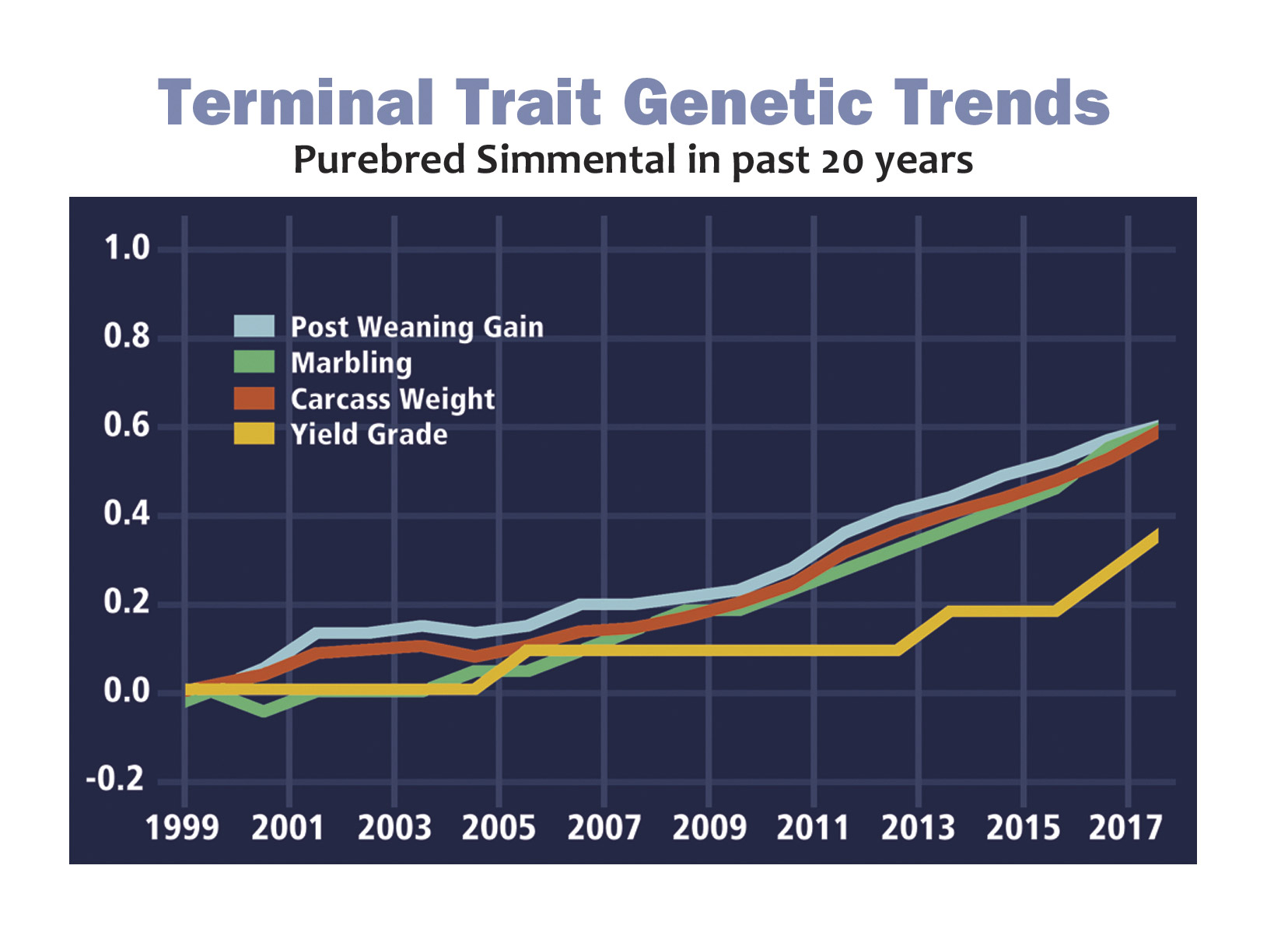 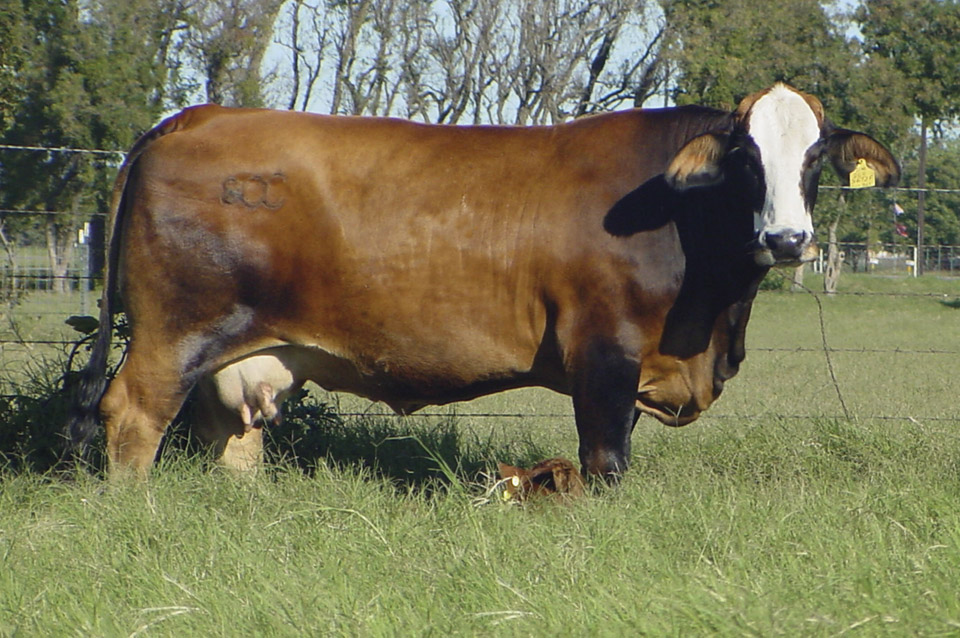 In summary, I would have to say that Simmental are in a terrific position in the US; demand by the commercial industry is high and growing and as this trend continues so will the seedstock industry.

In closing, as president of the World Simmental Fleckvieh Federation and current trustee for the American Simmental Association, I congratulate the British Simmental Society on reaching the 50th anniversary of existence and wish you much success in the future along with thanks for inviting me to author this article for your society.