HOW HEAVY IS
TOO HEAVY?

Research by AbacusBio International on behalf of AHDB, QMS and HCC has used industry data to create a model of UK beef production systems, which shows how increases in mature size affect traits such as carcase size and cow maintenance requirements, and how these changes affect cost and revenue on farm.

Suckler cows in the UK have been increasing in size over time. Heavier cows provide extra value to the farm by producing heavier offspring, and by having a higher cull cow value. However, they also cost more to keep on farm, and so we must strike a balance on cow mature weight.

cows benefit the modelled farm through higher cull cow revenue, and by producing offspring with higher carcase revenue and quality. However, heavier cows have higher costs in terms of maintenance feed and replacements, and they also suffer from a decrease in fertility, potentially producing less offspring in their breeding lifetime. Heavier cows also require more land than lighter cows, resulting in a reduced stocking density on farm. Once you combine all of these factors, the cost of production is higher for heavier breeding females and therefore profitability is worse.

Having taken all of these effects into account and applying the model across a range of cow mature weights, the team found that the optimum mature weight for a breeding female is between 680 and 685kg. Beef producers who feed primarily home-grown feedstuffs may be able to keep breeding females of up to 700kg to optimise their profits, as the cost of producing home-grown feed is lower than the cost of buying feed in. 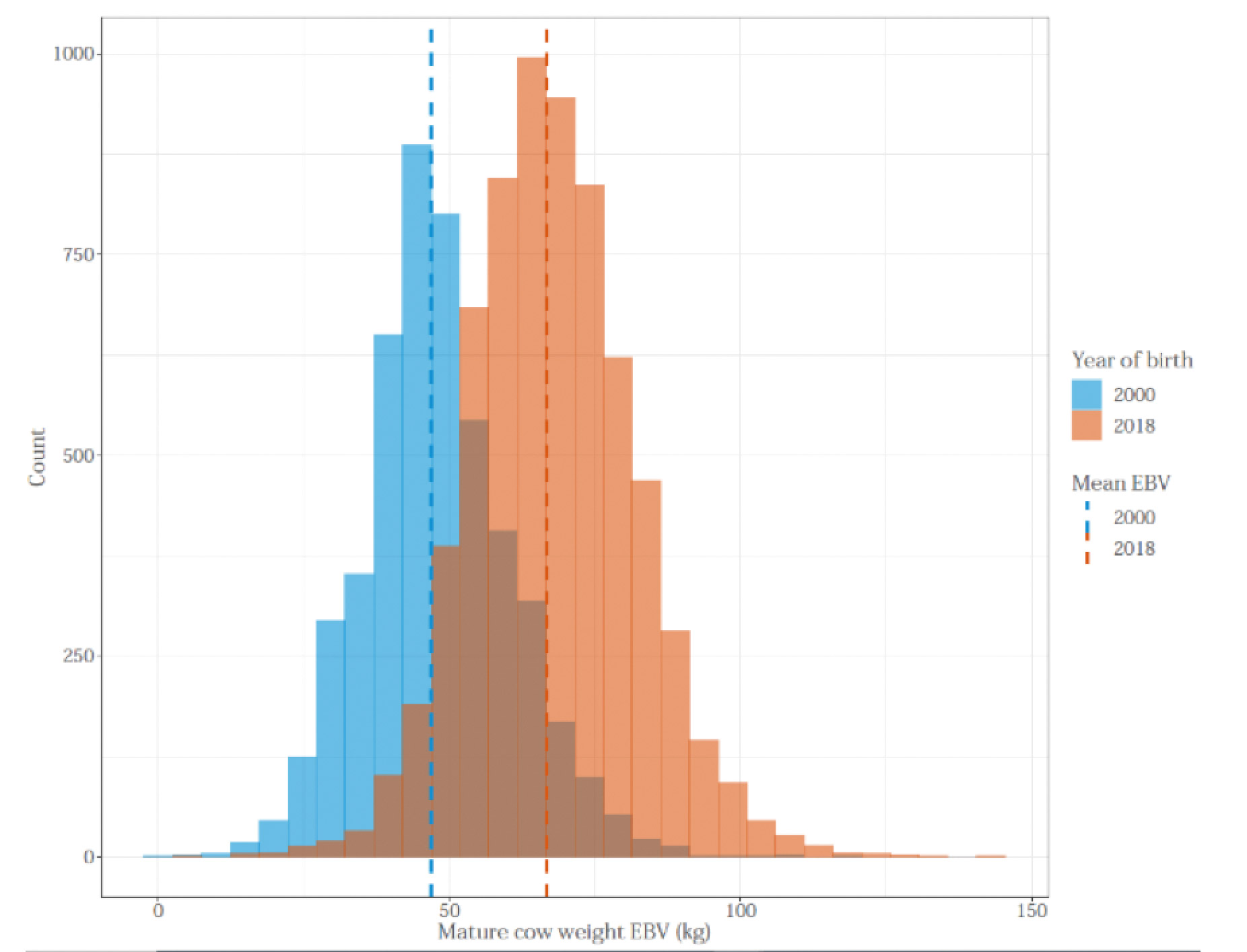 Looking at the phenotypic trend for mature cow weight over time using Breedplan data is difficult due to the low level of mature weight recording in the breed. However, we have been able to get an estimate of Simmental mature cow size over time by analysing cull cow data from the slaughter records that are shared by abattoirs for use in the AHDB national beef evaluations. The estimates are based on multiplying the cow carcase weight by the industry average killing out percentage.

Assuming that this dataset is a representative sample of the UK Simmental herd, this would suggest that in 2013, over 50% of mature cows weighed more than the optimum 685kg, and as the genetic potential for larger mature cow weight increases, the percentage of mature Simmental cows over the optimum mature weight is likely to be higher than 50% today. The profitability of the national herd is therefore lower than it could be.

To increase herd profitability, there is a strong argument of the importance that this trend for heavier cows is reversed. As mature weight is a heritable trait, we can use genetic improvement techniques to help take aim at the current trend.