Set in the heart of the magnificent Lake District National Park, overlooking Windermere from the heights of the historic Troutbeck village is Town End Farm, run by Angus Freeman. It is hard to imagine a more picturesque setting for a farm anywhere in the country. Despite the beautiful setting, it is nonetheless a proper hill farm, and the stock it carries has to be able to cope with whatever the weather throws at it.

The family took on the tenancy of the farm in 1971, when Angus’s father, Doug, took on the farm from the National Trust. Doug was still a regular on the farm up until recently, but had taken more of a backseat to the running of the farm when Angus came back to work full time on the farm in 2008, after spending six years working as a mechanic at C.T. Hayton’s, a local tractor dealership and engineering firm.

Town End now runs to around 700 acres of tenanted and owned land, running from the shores of Windermere to the top of Wansfell which rises to 1500 feet above sea level. The Freeman’s lamb about 750 ewes, with 400 Swaledale and 350 mule ewes. The Swaledales, are mainly home bred and any extra replacements that are needed are bought in as gimmer lambs. Running alongside the sheep is a herd of Luing cattle, which were initially introduced in 2009 when Angus initially bought six heifers from the Cadzow Bros on Luing at a sale in Oban. The herd runs to 30 cattle now, nearly all of them sourced from the same herd on Luing. “We found the cattle ideal for what we need. They thrive on the rough ground and are very quiet, important in the lakes where you may be approached at any time by walkers or mountain bikers whizzing past” he says. They used to have a herd of Limousin cattle

but feel that the Luings perform better, with wintering being cut from 8 months with the Limousin to a mere 3 months with the Luings.  The cattle come in between Christmas and New Year and are out again by late March. The first heifers were crossed with a Limousin bull which they still had after selling the herd, but Angus felt that the calves weren’t an improvement on the original Luings.  In looking for an alternative, they have been delighted with the Simmental bull, and influenced by the reputation of Simmental – Luings as an ideal cross. Calving is in late February/March, and heifers calve at around 3 years old. Spring calving fits the farms system as the cows can graze, and more importantly, thrive, on the fell during the summer months without any extra intervention.

The Freeman’s sourced a Simmental bull from the Denizes herd of Michael Barlow, Ulnes, Nr Leyland, Lancashire with the herd high health status being extremely important.  Extremely impressed with the quality of the calves and the ease of calving, further Denizes bulls have subsequently been purchased.  “The Sim-Luing cross excels as hardy hill cattle”, Angus says. “With some excellent growth rates and with the hybrid vigour offering a viable alternative to the established continental breeds, they are ideal for upland farms which need hardy cattle able to thrive on the marginal land.” This factors allied to the High Health status that the family have adhered to, make the heifers a very attractive option for herds looking for recipient cattle in pedigree herds and Angus says he can’t breed enough females to meet the demand, with a ready trade selling them all at home. “Sim-Luing heifers have proved themselves to be great mothers and good milkers as well as easy calvers and the pedigree breeders are keen to

capitalise on this” he says.  In fact, the majority of last year’s bulling heifers were all snapped up by one breeder who was so impressed by them and having initially only planned to buy a couple! Steers used to be sold in the January suckler sale at J36, Kendal, but with the tremendous growth rate that the Simmental bull has brought, Angus has moved to selling them at the first suckler calf sale in October.  “They really are proving to be an ideal suckler calf, quiet and naturally thrifty, with the calves going to the same buyers most years”, he says.

Moving forward Angus is keen to introduce more Luing cattle to Town End Farm to meet this growing demand for his heifers by the Simmental bull.  “The Simmental Luing cross is just ideal for our farm.  Looking forward to a beef system with less direct Government support, and a slant towards more environmental schemes, a beef cow that pays its way on harder ground has to be the way forward.  The Simmental bull will continue to play an important and integral part in the herd’s future. 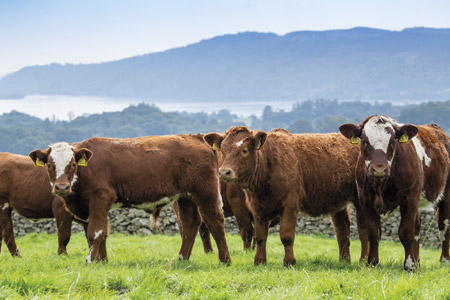