‘FIT TO FACE
THE FUTURE’

Based on the very edge of the fertile Eden Valley in the small hamlet of Blencow, in the shadow of the eastern mountains of the Lake District near Penrith, Cumbria, Irving Pearson farms Manor Farm with his wife Evonne. Irving is following in the footsteps of his great grandparents who took the tenancy of the farm on back in the mists of time and which now runs to 320 acres of productive farmland with about two thirds of this owned, and the rest rented.

The Pearsons run around 100 Texel cross bred ewes, a project that his children, Lilia, 11, and Isaac, 9, are ‘in charge of’, and which has quickly grown from the starting point of a couple of ewes. Being in such a fertile area they also grow around 50 acres of barley, which helps with the winter feed and bedding, and also helps keep the ground fresh and in good heart, reseeding with grass after cropping.

The main focus of the farm however is on their herd of 120 suckler beef cows, a mixture of pure Simmental and British Blue cross Simmental which run with the Simmental bull, producing top quality beef cattle which are all retained and finished on the farm. “We put a few pure Simmentals to the British Blue bull with a view to retain some of the resulting heifers for breeding and there is a market for our surplus heifers too” Irving observes. 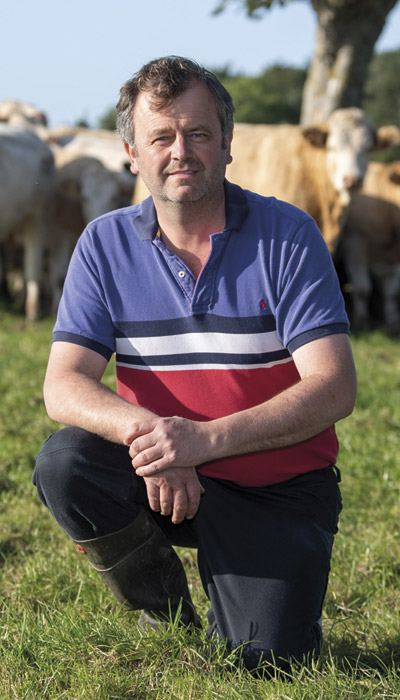 “Well fleshed and fast finishing, but the females are great milkers too, an ideal starting point for a modern suckler cow.”

Pre foot and mouth in 2001, the farm was using Limousin sired cattle out of dairy cows, but when the Pearsons re-stocked they re-evaluated the business and decided to look for a beef breed with a bit more carcase and quicker finishing time than they were achieving with the Limousin cross.

Having looked around they settled on the Simmental bull as their main sire, liking them for their carcase, mothering ability, and the fact they were very quiet to handle.

“They are a genuine Dual Purpose breed” says Irving, “Well fleshed and fast finishing, but the females are great milkers too, an ideal starting point for a modern suckler cow” he says. Today they run an essentially closed herd, retaining 16-20 of the best females annually, which are calved at three years old to an easy calving bull, and just buying in fresh bulls when required. “Keeping the herd closed as much as possible helps keep the herd healthy and saves us bringing in unforeseen in problems.

When we look for a new bull a high health status is as important as the bull himself” he notes. As well as keeping an eye on the health status of incoming cattle they also vaccinate against BVD and leptospirosis which is seen as a vital tool to keep the herd disease free.

The herd calves in spring mainly to utilise the best of the grass and all the calves, apart from the heifers that they select to retain, are finished on the farm. The calves get a good start and summer well as Irving finds the cows are such good milkers off the grass. Once weaned and housed in the autumn, the bulls are finished on a diet of barley and a 34% protein pellet. With the Simmental breed being well noted for its high growth rate, the bulls are sold at between 12-14 months old direct to slaughter on a deadweight basis, and aiming for a carcase weight of around 400kg. These Simmental sired bulls finish well on this system, fleshing up quickly and meet the specification with ease, mainly hitting the U Grade for maximum profitability. The heifers are grazed around on grass for a second summer and then housed for winter and finished on the same ration as the bulls, selling these at around 20-22 months old, and with them finishing equally as well as the bulls.

“Simmental is a breed fit to face the future with its ability to produce cattle with lower inputs and high growth rates off milk rather than lots of concentrates.”

When buying a fresh stock bull Irving likes to study the catalogue closely and likes to check out the EBVs for calving ease, milkiness as well as growth as he feels the maternal values of the bull is vitally important for the system he uses, and he sees the EBVs as a tool for selection, but as he says “ I have to like the look of the bull too…..no good having a bull with all the correct figures if you don’t like the look of it….It will hopefully be working here a long time so it has to look the part too!” 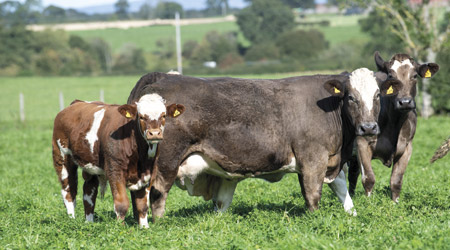 Whilst he has bought bulls at Carlisle in the past, Irving’s last few bulls have been bought out of Stirling, where he feels there is also a wide range of bulls to choose from and a great depth of quality amongst the bulls on offer.

Looking back over the last 20 years or so with the Simmental as the cornerstone to their herd, Irving hails the Simmental as an ideal breed to fit into his system. “My system might not fit everyone, but it certainly works for us on our farm, and that’s what we set out to achieve when we had to make the change after FMD in 2001” he muses. As farming moves forward to a less certain time post Brexit and less government support, Irving feels the Simmental is a breed fit to face the future with its ability to produce cattle with lower inputs and high growth rates off milk rather than lots of concentrates.  This he says therefore lowers costs whilst increasing profitability, offering the Simmental a competitive edge over other breeds.