‘THE BREED FOR PROFIT’
IN IRELAND 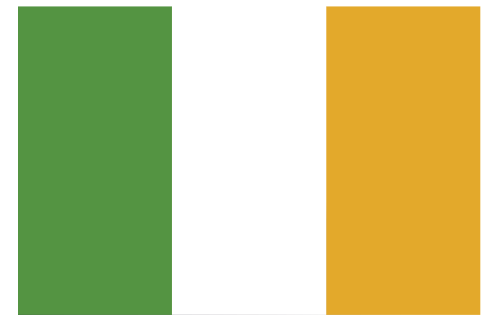 Being our closest neighbouring herdbook, and with a good degree of genetic connectivity, we are delighted to include an article from the Irish Simmental Cattle Society. Here the Society’s COM, Peadar Glennon gives an overview of the National herd, and where the Simmental breed fits in, and outlines the breed’s ongoing progress in genetic trends over a ten-year-period. 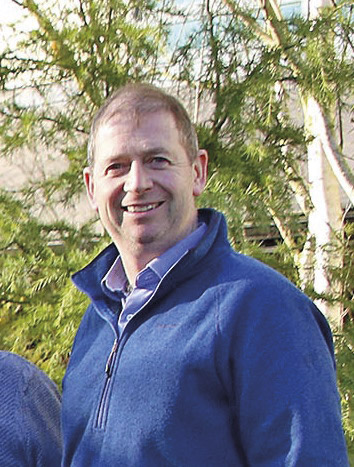 Simmental in Ireland
Firstly, congratulations to the UK Simmental Society on reaching its 50th Anniversary. Being the custodian of the herdbook is a vital role and one which should never be underestimated. In Ireland, we are running a year behind as the first Simmental were imported in 1971. When the current restrictions pass, we will have to plan later this year as to how best we will mark our 50th milestone with events.

Breed Strategy
In 2000 the then Council of the Irish Simmental Society developed a clear Breed Strategy focused on developing further the beefing characteristics of the breed, the clear purpose being to position Simmental competitively with other continental breeds. This coupled with maintaining the superior maternal advantages of the breed ensured a market and identity for Simmental cattle.

The National Herd
The makeup of the National Herd has seen a seismic shift to dairying since the abolition of the milk quotas in 2015. (See table on right) This has greatly increased the challenges facing beef breeds as both markets are opposites in terms of stockbull requirements.

Simmental in the Commercial Herd
Simmental sired calves in the National herd has remained consistent over the past 10 years at 7% while 11% of the cow type is Simmental. In terms of system profitability, young bulls are consistently leaving the highest margins and Simmental are recorded as one of the highest performers in this section. The table below taken from results from performance recording of young bulls at Tully Test Station highlights this performance. 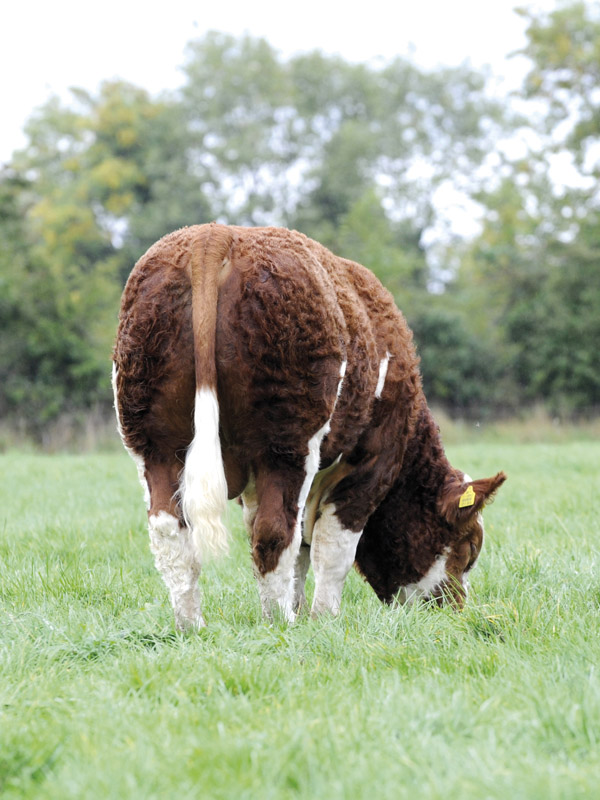 A.I. Usage in the Suckler Herd
On average there are 10% of the Suckler cows served to A.I. annually and Simmental accounts for 7% of this market. See table below for the most used Simmental bulls in 2019.

Most Popular A.I. Sires in the Suckler Herd

The Pedigree Herd
The following is a snapshot of the Pedigree Simmental Herd in terms of numbers: 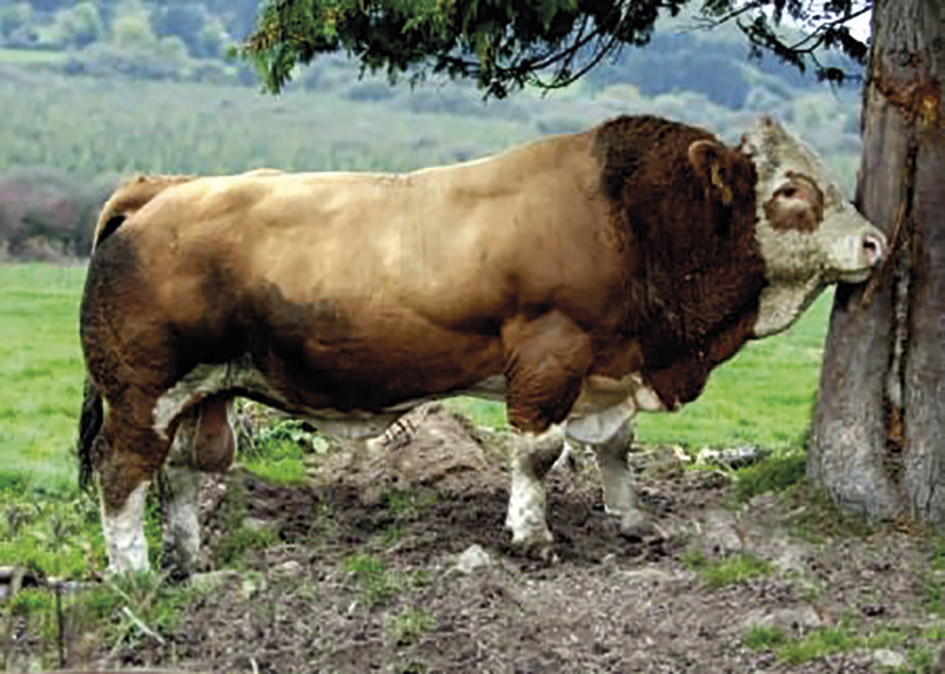 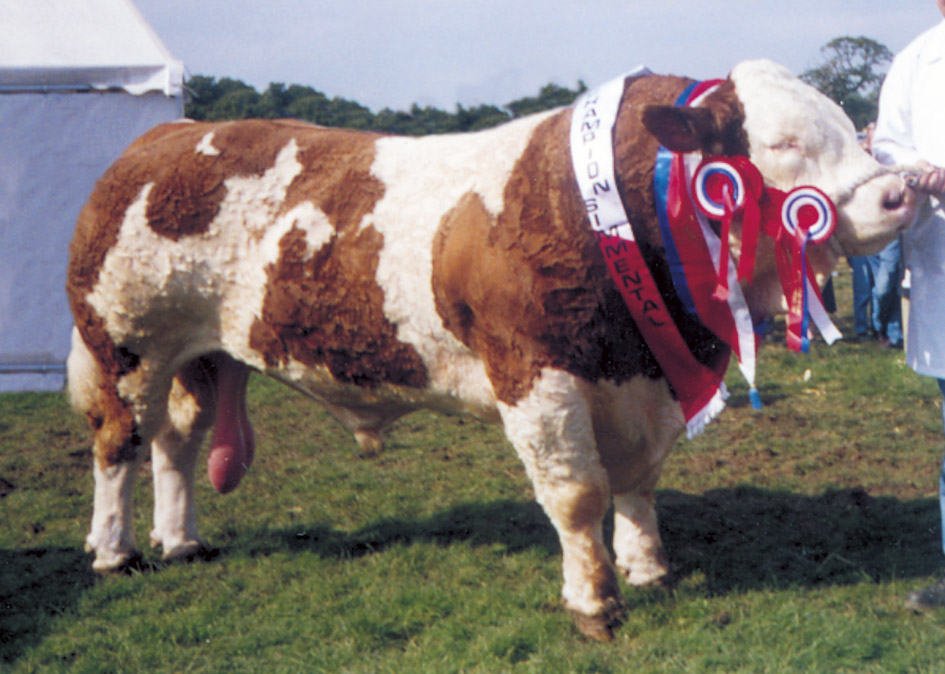 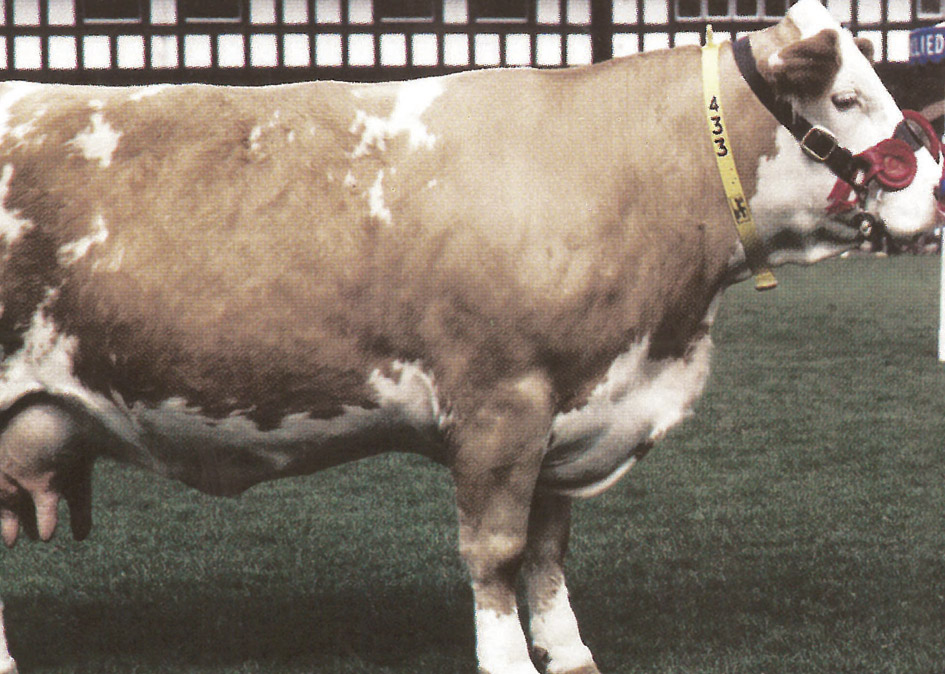 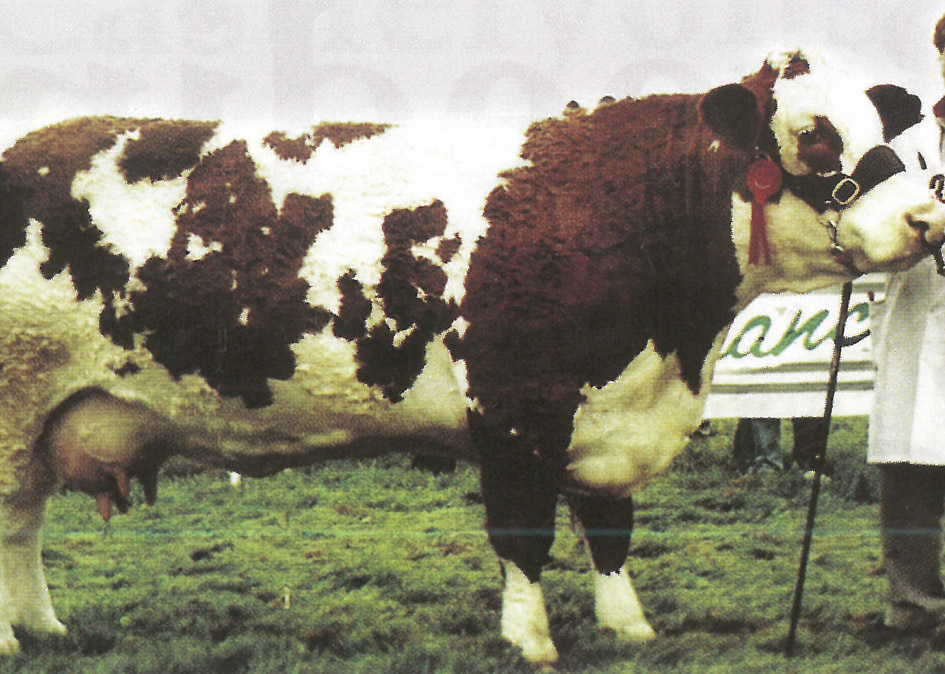 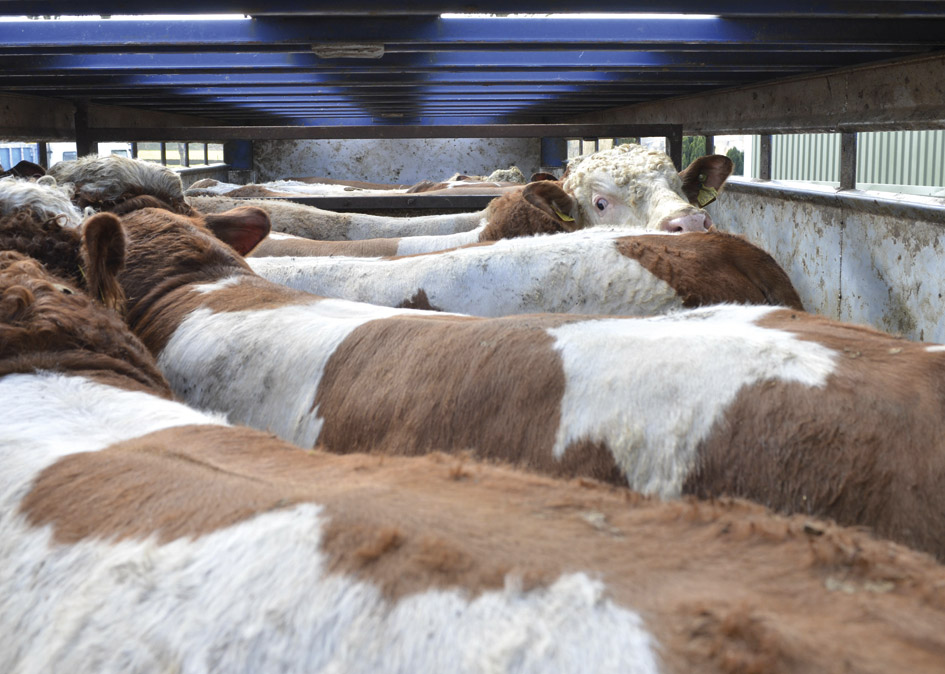 Simmental Sales
The Society Sales are centred around our Premier Sales which take place at Roscommon each March & October. The sales have developed on the concept that the best animals are routinely put forward for sale.  As recently as last October, our Roscommon Sale recorded a new interbreed record price when the Behan’s Clonagh Lucky Explorer was knocked down at €52,000.  Best of luck to the Wood Family, Lancashire with their purchase and I’m sure in years to come we will see this bull put his stamp on the Simmental breed.

Online Sales
The restrictions imposed because of the Coronavirus has resulted in Livestock Marts putting in place an on-line facility for selling. In fact, our Premier sale last October was 100% on-line and worked well with very high averages and clearance rates recorded. In future it is expected that all sales will incorporate a blend of ringside and on-line activity. This will allow potential customers far greater freedom in terms of pre-sale livestock viewing and following day sale activity.

Exports
Ireland has over the past number of years, following the breed strategy put in place in 2000, emerged as a key source for Simmental breeding stock throughout Europe where the focus is on beef production. This market is twofold and encompasses live exports as well as frozen semen and embryos. The quality and easy fleshing ability of the Irish Simmental are key elements in the establishment of these markets. The last four years has seen a lot of activity in the Turkish market for semen and Pedigree Bulls to Italy for follow-on semen sales to both Turkey and China.  These markets are looking for superior beefing qualities and distinctive colour markings.

Ireland / UK Collaboration
Down through the years there has always been a strong cooperation between both Societies and breeders with the common goal being the betterment and advancement of the breed aided by the sharing of bloodlines. Some cows that certainly left a positive impact on our breed include Star Fanny & Anatrim Kay while Camus Solitaire moving in the other direction will forever be remembered. When reflecting on bulls who have left their imprint on both herdbooks, the names of Richardstown Jumbo, Hillcrest Champion, Raceview King, Sacombe Wishful Thinking, Carnkern Titan & Rosten Barney spring to mind as such. In recent years we have seen animals exported in each direction having had a massive impact on the Show circuit with Auroch Eve & Banwy T-Rex two deserving special mention.

Simmental Stockpeople
It was stockpeople with vision and a desire to succeed that painstakingly researched and sourced new genetics to take our great breed to where it is today. Recent agricultural policy encompassing a greater emphasis on evaluations, where it is envisaged that a mobile phone can decide mating decisions is worrying and must be resisted where necessary. Evaluations are welcomed but only as another tool to assist in breeding decisions. Stockpeople will hopefully always play a key role in searching for and breeding the next generation of Simmental Cattle to benefit all Simmental enthusiasts.

Central Database
The Irish Simmental Society signed up to the concept of a central all breed database, from which our evaluation system is ran, in 2002. In theory this should deliver near perfect evaluations, which is correct for certain traits, but other traits should be within breed.

Genomics
In 2012 the Irish Simmental Society, together with all other breeds, made the decision to move to SNP DNA testing to pave the way for the issuing of Genomic evaluations. After four years of building up a training population which included the testing of all A.I. bulls past & present, the first Genomic evaluations were launched. One of the main advantages of the SNP system is its ability to predict parentage when ran against the DNA database. Also, of interest is the ability to carry out other add-on tests such as Polledness at the point of testing. 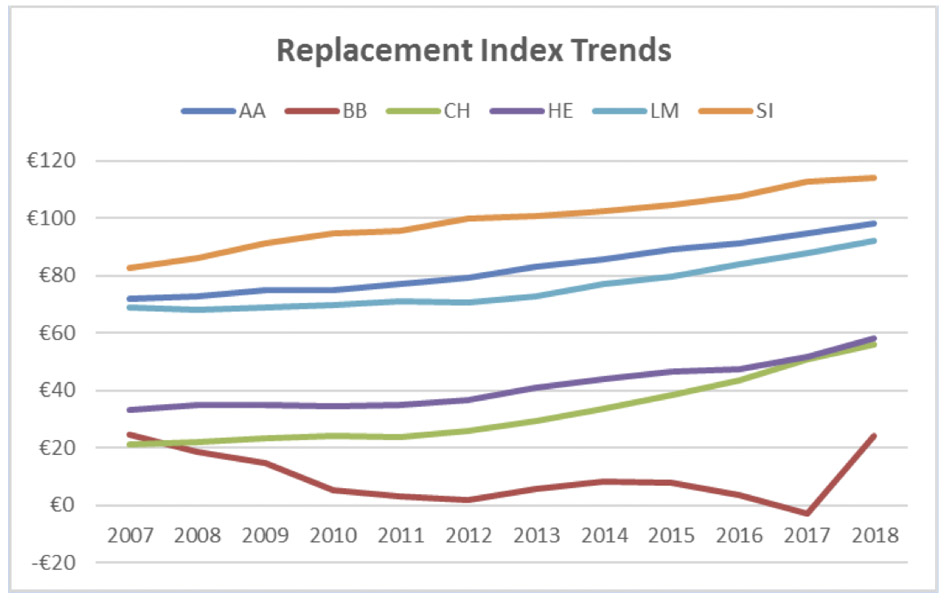 Fleckvieh
In 2015 coinciding with the increase in dairying, we saw a renewed interest in Fleckvieh cows with farmers looking for cows with improved milk solids and fertility. This increased interest resulted in many farmers switching to Fleckvieh with both the number of cattle imported and A.I. usage increasing year on year.  To cater for registering these Fleckvieh animals, the Irish Simmental Cattle Society established a separate herdbook section and registration numbers are increasing yearly with a lot of potential for additional growth.

Finally, congratulations again to the UK Society and all its members and looking forward with excitement to what lies ahead. Over the years many strong and valuable friendships have been created between members of both Societies. This cooperation and friendship has resulted in the subsequent breeding of many high profiled animals which have left an everlasting stamp on the Simmental breed. Long may this continue as we all strive to help in the breeding of the next superstar!