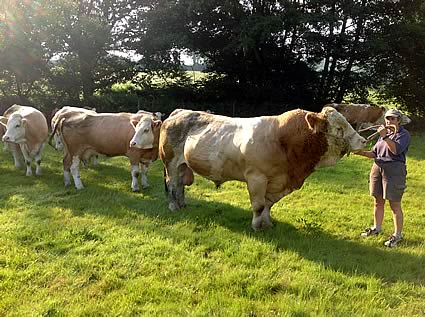 The Ravensdale herd owned by Michael Hind, near Mayfield, East Sussex, has been recognised by EBLEX as the Most Improved Herd of Simmental cattle in England for 2012.

The award is presented by the EBLEX Beef Better Returns Programme (Beef BRP) to the recorded herd that shows the greatest genetic gain for commercial characteristics over a 12-month period. There is a separate award for each of 11 UK breeds.

Michael Hind bought the 162ha (400 acre) Bungehurst Farm, Near Mayfield, East Sussex 14 years ago. He established the Ravensdale herd of pedigree Simmental with one bull and ten maiden heifers which calved down for the first time in 1998. A year later he also began breeding pedigree Sussex cattle. Numbers now stand at 20-25 Simmental cows, 35 Sussex cows plus a herd of 35 Sussex and Simmental crosses.

The bulls are turned out with the cows from the beginning of June to the middle of August. Scanning takes places at the end of September and anything barren is culled. The herd is brought in and fed straw/silage at the end of October or early November. The heifers calve down in January followed by the cows at the beginning of March.

They are turned out during late April, weather and ground permitting and  the calves are offered creep feed from the start of July. They are weaned in October.

When selecting which females to keep, Mr Hind with his farm manager, Brenda Hide have been looking in the past year or two for those with good milk figures based on 200 day weights, to counteract a couple of bulls used previously which proved poor for milk.

The poorer milking cows have now been culled from the herd and the Estimated Breeding Values (EBVs) are now showing improvements in milking ability.

Bulls are chosen for easy fleshing, providing they have good size and mobility traits.

“Our current stock bull is four years old and will remain active in the herd for another three or four years,” says Mr Hind. “His second crop of calves are on the ground now, and we can see that he is already putting extra weight gain into his progeny, which is very pleasing.”

The cattle are shown at all the local shows, and this year they also went up to the Cheshire Show. This generates a lot of interest with commercial farmers who are interested in crossing Simmentals onto native cattle because of the easy calving and fleshing traits. Sales are made directly from the farm, through word of mouth or from interest generated at local sales.

Commenting on their strategy for the future, Mr Hind said: “Performance recording is the way the breed needs to go to ensure easier fleshing and to prevent the animals getting too big.

“Figures are a very useful management tool that help us understand the detail and concentrate on specific traits to achieve this.”

“Michael and Brenda are to be congratulated on their success. The main way to change the genetic potential of a herd is through careful sire selection, and this farm provides a good example of where it has been done well.

“High EBV sires should be selected in a balanced manner, taking into account not just growth and carcase traits – but also those that influence characteristics such as ease of calving and maternal performance.

“The bull selection decisions made today will still be influencing the herd in ten years’ time – so a little time spent studying performance records now is time well spent. Bearing in mind the long-lasting impact of genetic selection – this year’s win bodes well for the future of the Ravensdale Herd.”