The Scottish Club held its Annual Show of Commercial females at United Auctions, Stirling Mart on 7th May 2012.

Simmental heifers were clearly in demand for their excellent Maternal ability, with the First prize pen of four heifers over 15 months from Clive Houldey, Kirtleton, selling for £1400 with bulling heifers selling to £1700 for the second prize pen of four from Messrs Dyet, East Merkland.

Champion Simmental x heifer with a Simmental calf at foot sold for £2350, from Hector Macaskill who also won the best pen of four heifer sunder 15 months old selling for £1300. 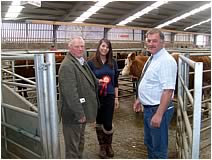 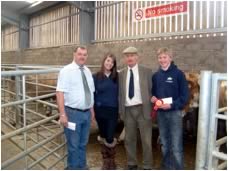