Simmental females in demand at Dungannon

A buoyant trade for Simmental females at Dungannon Farmers’ Mart resulted in pedigree heifers selling to a top of 2,000gns; while commercial entries peaked at £1,110 over their weight.
Sale leader in the pedigree section was the fourth placed Coolcrannel Edna bred by Willie Phair from Lisbellaw, County Fermanagh. Born in April 2013, she is a daughter of the former 10,000gns Stirling champion Drumlone Anchor, and is out of a home-bred dam by Dripsey Super King. Buyer was David Toner from Camlough, County Armagh.

Two lots came under the hammer of auctioneer Trevor Wylie at 1,700gns each. First to sell was the fifth placed Woodford Paula 2nd from Thelma and Peter Gorman’s Armagh-based herd. Almost two-years-old, she is by the popular AI sire Kilbride Farm Newry, and is out of the herd’s prize winning show cow Woodford Paula. This heifer was shown successfully throughout the summer, and was snapped up by Peter Jordan from Dungannon, County Tyrone.

Also selling at 1,700gns was Castlemount Vienna, a second prize winner by Omorga Volvo, bred and exhibited by Duncan McDowell from Newtownards, County Down. Her dam was the Slievenagh Fantastic daughter, Slievenagh Vienna – purchased privately for the 15-cow herd founded in 2011.

The pre-sale show was judged by the club’s vice-chairman Matthew Cunning, Glarryford, and generously sponsored by Animax – manufacturers of the leading bolus brand Tracesure.

Claiming the day’s female and reserve supreme championship awards was Breaghey Elberta, an April 2013 born Dripsey Super King daughter offered for sale by Wesley Abraham from Irvinestown, County Fermanagh. She was bred from the Derrycallaghan Hamilton daughter Corrick Vida – 3,100gns Dungannon female champion in spring 2009. This heifer failed to meet her reserve and was withdrawn from the salering.

The reserve female championship went to Ballinlare Farm Dancer, a twenty-three-month-old heifer from Joe Wilson’s herd at Newry, County Down. Sired by the herd’s 20,000gns Stirling champion Auchorachan Wizard, she is out of a home-bred dam by the noted Camus Brandy. This heifer was shown throughout the summer, and despite a bid of 3,000gns she returned home unsold.

The male and supreme overall championship awards went to the May 2013 born Castlemount Ernie bred by Duncan McDowell. Sired by the Hillcrest Champion son Curaheen Vio, he was bred from a dam carrying the Slievenagh prefix.

Taking the reserve male championship was Ballinlare Farm Equaliser, a May 2013 born Auchorachan Wizard son exhibited by Joe Wilson. He is out of a home-bred dam by former stock bull Innerwick Krackerjack.

A draft entry from Andy Weatherup’s herd at Larne saw prices peak at 1,800gns, realised by the October 2007 born Ballyvallough Valerie. Sired by Omorga Shogun, she is out of a home-bred Glebefarm Marksman daughter. Included in the price was her unregistered heifer calf, and a confirmed pregnancy to Slimero Everest.

The commercial section of the sale met a solid trade with in-calf heifers peaking at £1,750 and £1,550 paid to C Daly from Benburb, County Tyrone. Next best at £1,500 and £1,450 were in-calf heifers bred by Seamus Casey, Dungannon.

A spokesman for the NI Simmental Cattle Breeders’ Club commented that bull trade reflected the current economic climate. “We had a small entry of bulls. Buyers were sticking to a budget, which unfortunately for the vendors, fell short of their expectations. The autumn sale can be tricky for bulls. 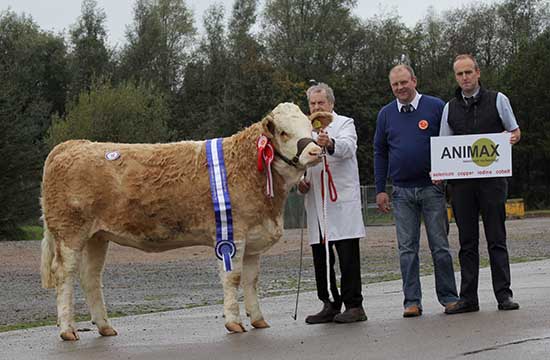 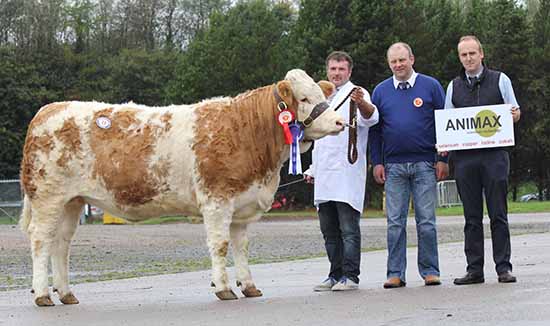 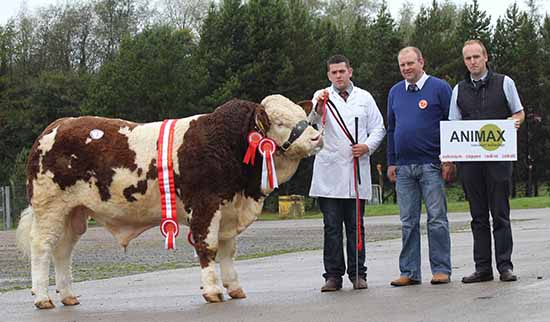 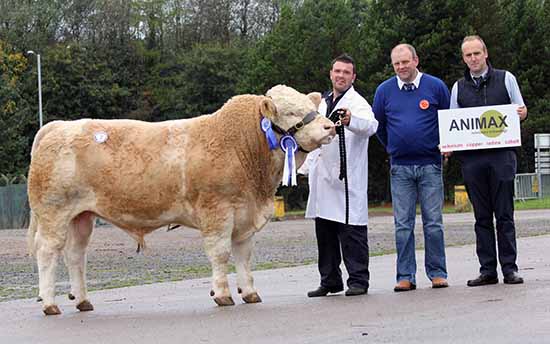