Commencing at 7.00pm, the event will be hosted by club chairman Nigel Glasgow, and his wife Phyllis, at the Bridgewater Farm Herd, 30 Creevagh Road, Cookstown, County Tyrone, BT80 9QU. 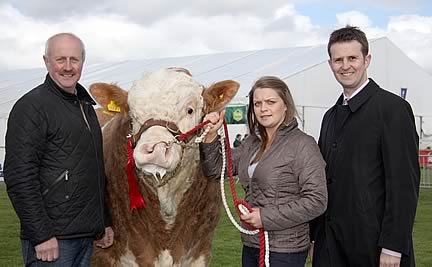 During the evening the highest placed competitors (under 30-years-old) will be selected to form teams to represent Northern Ireland at the British Simmental Cattle Society’s National Stockjudging Competition. For the first time in its history, the national final is taking place in Northern Ireland.

Club secretary Robin Boyd said:”We are delighted to announce that the Northern Ireland Simmental Club is hosting the 2013 stockjudging finals at Enniskillen Show on Wednesday, August 7. This is a very prestigious event in the society’s annual calendar, attracting upwards of 50 young members from throughout the UK.

“We are looking forward to welcoming breeders from across the water, and showcasing the cream of the Province’s Simmental cattle.”

“The club usually selects two judging teams to compete at the national finals, but this year we are putting forward three teams in each age category – junior, under 21; and senior, under 30 – giving 12 young people an opportunity to compete at the national competition. We are also pleased to reveal that Bank of Ireland has weighed in to sponsor the club’s junior judging teams.”

The NI Simmental Club’s Young Members’ Association co-ordinator Zara Stubbs is urging all club members and their families to attend the Cookstown event on July 1. “The club’s annual stockjudging competition provides Simmental enthusiasts with an opportunity to get together socially and put their stock judging skills to the test.

“Thanks to the Glasgow family for agreeing to host the competition, and to Bank of Ireland for its generous sponsorship.”