Simmental Male and Female of the Year Awards Presented

The Male and Female of the Year Awards sponsored by Danske Bank is one of the most prestigious competitions in the Northern Ireland Simmental Club’s annual calendar.

The competition has been running since 1997, and in keeping with its long-standing tradition, the winners were announced recently at Fermanagh County Show in Enniskillen. The crystal awards and rosettes were presented by Danske Bank’s head of agricultural relations John Henning, who was accompanied by Rodney Brown and Matthew Johnston.

“Prizes mean points, as the winners are determined using a scoring system which is collated at nominated shows throughout the season. Points are awarded to individual animals, and the higher the animal’s accolade in the show ring the bigger the points it earns.” 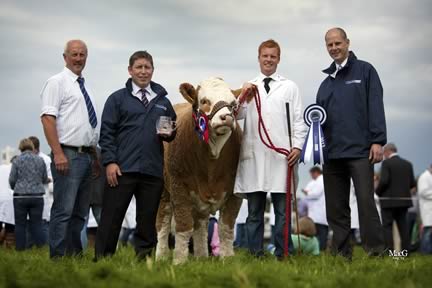 Claiming the 2013 Female of the Year title was the October 2011 born heifer Slieveroe Caroline, owned by Leslie Weatherup, and son Christopher, from Ballyclare, County Antrim. Sired by the popular Kilbride Farm Newry, and out of Clonagh Willow, she was bred by County Cork-based breeder Adrian Bateman, and joined the 40-cow Lisglass herd in November last year following a sale in Roscommon.

This much-admired heifer claimed the Weatherup famiy’s first-ever Balmoral Show championship in May, and went on to lift the supreme breed honours at Lurgan, Antrim and Enniskillen. She also scooped the female championship title at Armagh Show. 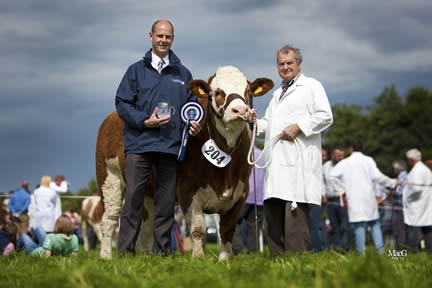 The reserve Female of the Year award went to Magheracrigan Clare 2nd, a home-bred Omorga Volvo daughter exhibited by Wesley Abraham from Irvinestown, County Fermanagh. This March 2011 born heifer was female champion at Omagh, and reserve female champion at Ballymena and Clogher. She stood first in her class at Lurgan, Armagh and Enniskillen, and was placed second at Balmoral Show. 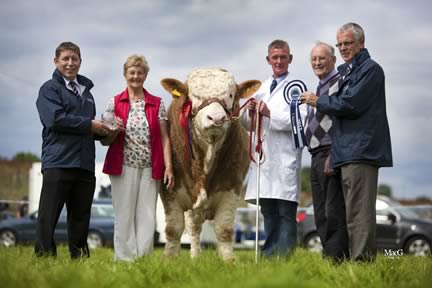 Raymond and Joan Porter from Omagh, County Tyrone, secured the Male of the Year Award with their home-bred junior bull Killynure Darwin. Born in January 2012, this Omorga Murray son was bred from Killynure Twinkle – one of eight cows in the herd founded in 1983. 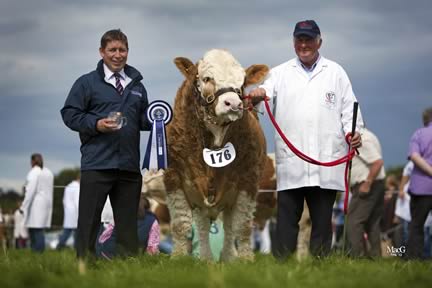 Another home-bred junior bull, Ranfurly Dominator, secured the reserve Male of the Year Award for David and Jonny Hazelton from Dungannon, County Tyrone. Also by Omorga Murray, this April 2012 born entry was supreme breed champion at Saintfield, Castlewellan and Clogher, and reserve champion at Omagh and Antrim.