A substantial quantity of semen from the February 2010 Perth junior and supreme overall Simmental champion, Auchorachan Wizard, is bound for export to Kenya. 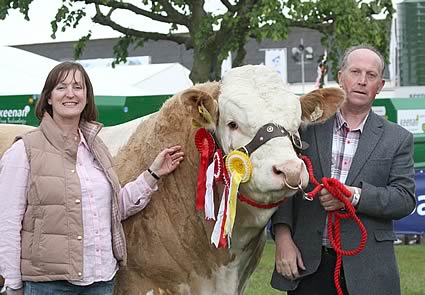 Semen from the 20,000gns Auchorachan Wizard has been purchased by Everest Enterprises Ltd chief executive, John Karuga, who is establishing a herd of pedigree Simmentals.

Asda agricultural manager, Pearce Hughes, who also runs a herd of 20 pedigree Simmental cows said:”Mr Karuga first saw the Simmental breed when he visited the Royal Show in Stoneleigh several years ago. He wants to establish a herd of pedigree Simmentals and selected Auchorachan Wizard for his ease of calving and tremendous Breedplan figures.”

Auchorachan Wizard is owned by Joe Wilson and sons, Keith, Alan and Neil, who founded the 60-cow Ballinlare Farm Simmental herd in 1984.

He boasts tremendous Breedplan figures, including a terminal sire index of +30, and a self replacing index of +37, placing him in the top one per cent of the Simmental breed. Wizard is also easy calving at +4.1, compared to the breed’s average of -0.6, which, given his performance figures is a rare combination.

Asda’s buying manager, Anne Spencer added:”John Karuga supplies green beans to Asda stores throughout the UK. I’ve known him for several years and was happy to assist in his search for a Simmental bull.