The autumn show and sale of Pedigree Simmental cattle held at the Bristol Sales Centre, drew an excellent entry of quality stock which proved to be much sought after by a filled ringside of customers. Quality paid dividends with bidding strong throughout the sale.

Henry Widdicombe’s Starline herd came up trumps topping the sale with Starline Wizard, while lifting the championship with Starline Westminster, two bulls which boasted practically total home breeding on both sides of their pedigree. Wizard, bred from one of the top females in the herd, Starline Lorette 9th, the dam of Starline Marquis, a bull which has bred well at Delfur Farms in Scotland, created quite a stir when he entered the ring, with the hammer falling at 3300 gns. The April 2008 born Starline Westminster lifted the championship, another to add to the collection for this famous Devon based herd. Westminster, weighed in with a sale day weight of 938 kgs. – demonstrating tremendous power and correctness, the champion sold at 2000 gns. 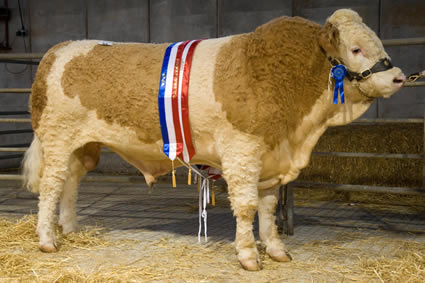 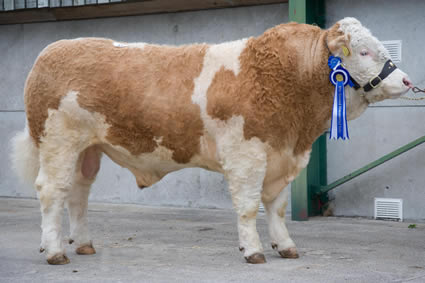 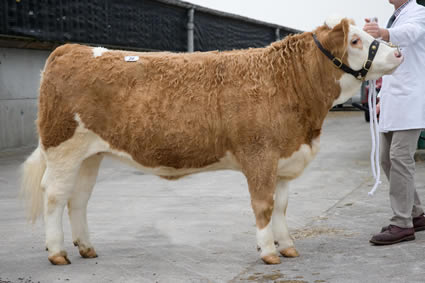 Potential customers looking for quality breeding females for their herd were not to be disappointed. Attracting a bid of 2550 gns, was the in-calf heifer, Greenfields Vesta, forward from Giles Green. Bred from one of the leading females in the herd, Curlieu Foxy Lady 4th, Vesta was sired by Corskie Pilot. 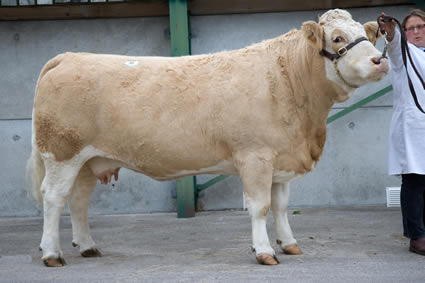 Amongst the stars in the sale, was the March 2008 born, Celtic Rock sired Beanhill Wynona. Much admired before the sale, Wynona added to a highly successful day’s trading for Mr. and Mrs. Kimber, selling for the top maiden heifer price of 2500 gns.

During the dispersal sale of the renowned Oakhill herd for Mrs. S. Wakefield, who has bred many prizewinning cattle over the years, she saw her best sell for 2900 gns. This leading female price on the day was bid for Oakhill Heidi 2nd , by Rhys Grenham, owner of the Boars Head herd. Another to display the herd prefix on both sides of her pedigree, Heidi 2nd was sired by the Gretna House Supersonic son Oakhill Moka and bred from the Balmanno Hitman daughter, Oakhill Heidi.