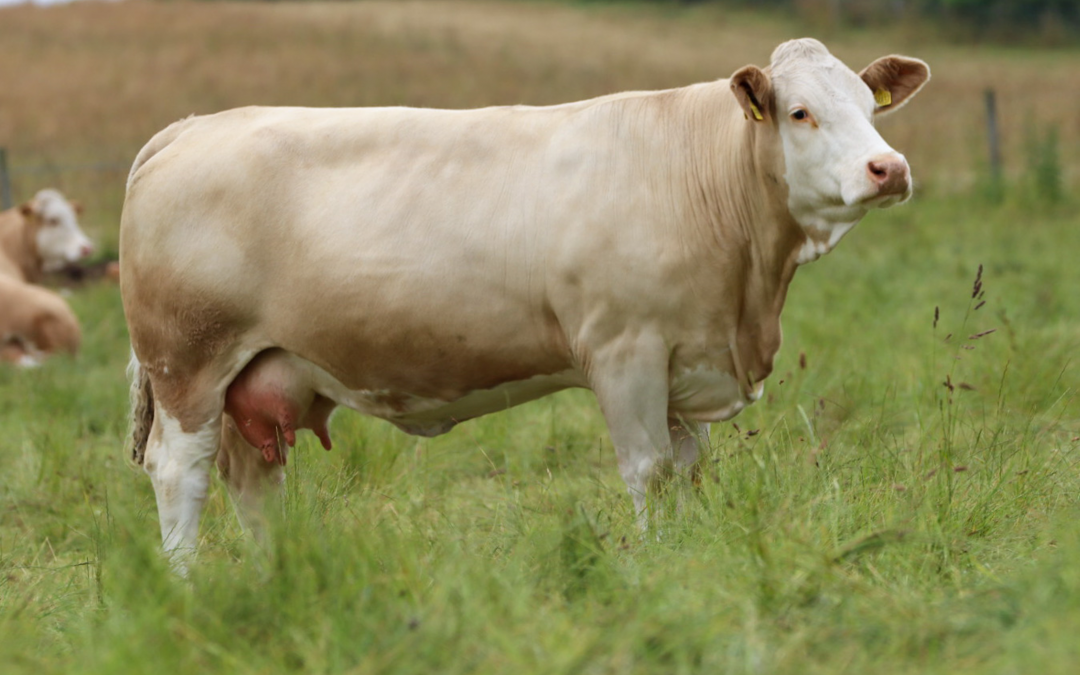 Corskie Heaven from Mr WJ&J Green, Corskie, Garmouth, Fochabers has been placed first in the ‘huge’ Cow class of the 2021 ‘Virtual’ Simmental Show. In what has been the biggest class to date in the two years of the ‘Virtual’ show, the five-year-old Corskie Heaven, a Dirnanean Bradley daughter, prevailed from a class of 197 Simmental cows from breeders all over the UK. It was very much a ‘Green Day’ in the results with Garmouth Clover’s Honeysuckle, a Bel Dhu Capercaillie daughter, from Laura Green, Corskie Farm, Garmouth placing second, with Corskie Flume placing third. Remarkably, five Corskie prefixed cows placed in the top twenty in the class.

Having the not inconsiderable job of judging this huge class was Thomas Hill, Daw Lane, Wadworth, Doncaster. Thank you Tom for a job well done and please look out for Tom’s video comments that will be posted soon on Facebook.

The places in the Cow class are:

So a mighty well done to the Green family and their Corskie and Garmouth herds for a tremendous performance. A massive thank you is extended to everyone who participated in this class. To get an entry of 197 cows has been exceptional and way beyond expectations. What a promotion for the breed to show the depth in quality of Simmental females in the British herdbook! 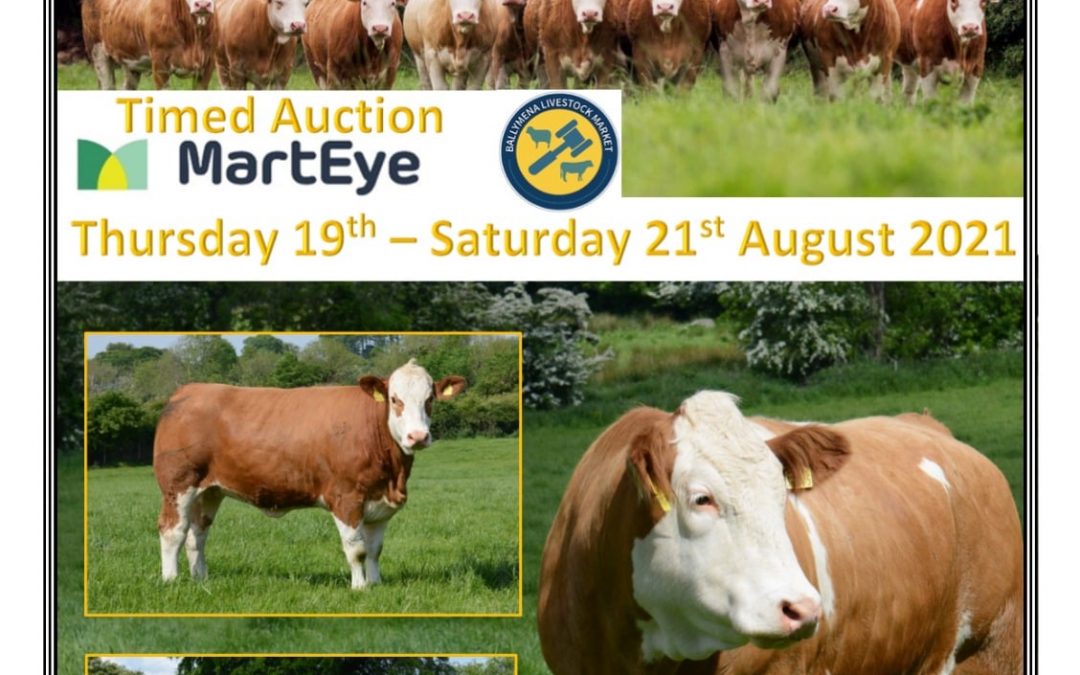 2021 sees the golden anniversary of the highly noted Kilbride Farm Simmental herd of WH Robson & Sons, Doagh, Ballyclare, County Antrim. To mark this special occasion the herd is having a 50th anniversary premier heifer sale which we are delighted to say will be held under the auspices of the British Simmental Cattle Society. The sale will be a timed auction, conducted through MartEye, and will run from the 19th – 21st August.

The Robson family will be offering heifers from all of the main cow families within the herd, and these will range from in-calf heifers to yearling heifers. As the Robsons note: “This is an opportunity to purchase some of our best heifers at this export qualified sale, which would not normally be available”!

From here the online catalogue will be finalised and a series of pictures and videos of the animals continuously highlighted on both the Kilbride Farm and Society’s respective social media pages. The Robson family have extended a welcome to visitors to inspect the heifers and the rest of the herd at anytime. The Kilbride Farm herd is situated only 20 minutes from the air and sea ports, and transport can be organised!

Look out for further posts regarding this sale over the coming weeks. If you have any queries to Michale or Norman Robson then please contact them on Facebook or Instagram, or telephone: 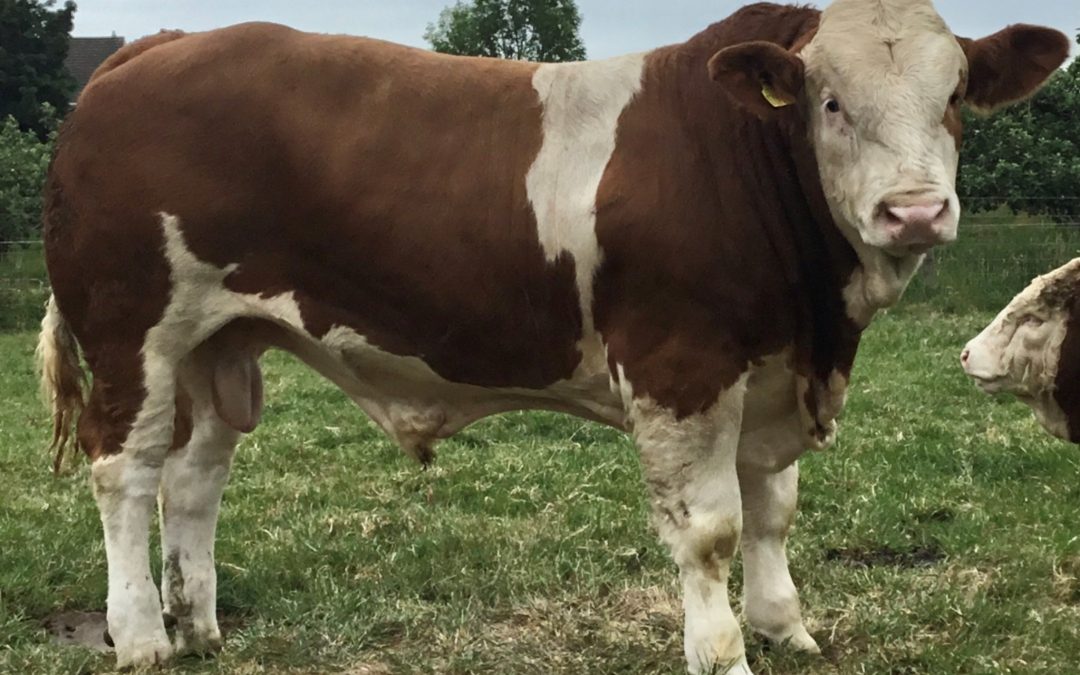 Back by highly popular demand, the 2021 ‘Virtual’ British Simmental Show gets underway this week! One of the highlights of the 2020 year for members, and for the ever-growing audience watching online around the world, last years ‘virtual’ show saw an incredible 745 pedigree British Simmental animals enter entered over ten classes by 161 breeders from all four corners of the UK. This ‘good fun’ competition proved to be a social media hit being the largest event of its type in the year, and proving to be a fantastic showcase of the breed highlighting some terrific British Simmental cattle and bloodlines.

So very much back by popular demand, here we go again and with the same simple principles as last year with just one or two tweaks. A picture-based competition, and with a video class introduced this year, the main aim continues to be the promotion of the wonderful Simmental breed, with pictures of quality cattle showcasing all the great attributes Simmentals have to offer. The first class is as follows:

This first class will be formally opened this Friday, 25th June, and run for one week. The next class will then be opened, and so on, for the remaining weeks. Entries will be required in by Thursday Midnight for the respective classes. Thereafter the respective classes will be judged over the weekend with all photographs entered dripped out from the Monday on Facebook and with the ‘big reveal’ of results later in the same week. All entries are required to be emailed to kate@britishsimmental.co.uk or information@britishsimmental.co.uk

If you had a go in 2020 then please do so again. If you watched in from the outside last year then now’s your chance to have a crack in 2021! Your support is what will again make this event. We again very much hope that this competition can be a talking point and a bit of fun for everyone to take part in. Most important of all is the anticipation of the flood of wonderful pictures across social media promoting the British Simmental breed. British Simmental: The Breed That You Can Bank On #No1ContintentalBreedforAgeAtSlaughter Look out for updates on Facebook from here and if you have any queries to this competition then please phone 02476 696513 or email information@britishsimmental.co.uk

To see the full rules and schedule of dates and timings for this competition then please click to the Society’s website: https://www.britishsimmental.co.uk/virtualsimmentalshow 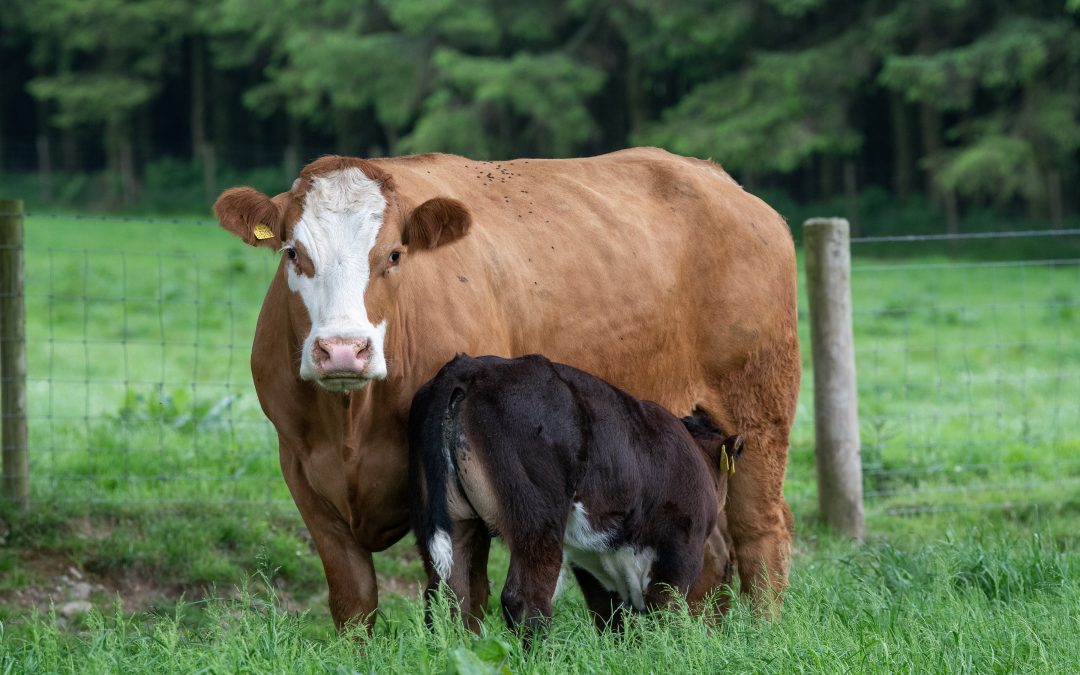 BALGRAY HILL SIMMENTAL FEMALES WITH CALVES AT FOOT SELL TO £2550

The first part of the dispersal sale of DR Cornthwaite, Balgray Hill, Lockerbie, held today, Tuesday 22nd June, at Harrison & Hetherington’s Lockerbie Mart saw Simmental cows and heifers with calves at foot sell to a top of £2550 with further lots at £2500 (x2), £2400, £2350, £2250 and with a number over the £2000 mark. The sale, with 120 Limousin and Simmental heifers and stock cows with Limousin & Blue calves at foot forward, saw every lot sell to average just under £2050.

The top Simmental price of £2550 (pictured) was paid for a May 2018 born female sold with an April born Lim bull calf at foot, with the outfit being knocked down to J&I Pattinson, Bonshawside, Kirtle Bridge, Lockerbie. J M Goldie, Newbie Mains, Annan paid £2500 for a rising five year old Simmental cow with her May born Limousin heifer calf at foot. Also at £2500 was an April 2018 born Simmental sired female sold with her April born Limousin heifer calf at foot to J&I Longlands, Tone Hall Farm, Bartley, Hexham.

Great to see a good demand for some first class Simmental outfits, and look out for further announcements on the second part of the sale of the Balgray Hill commercial herd in due course. 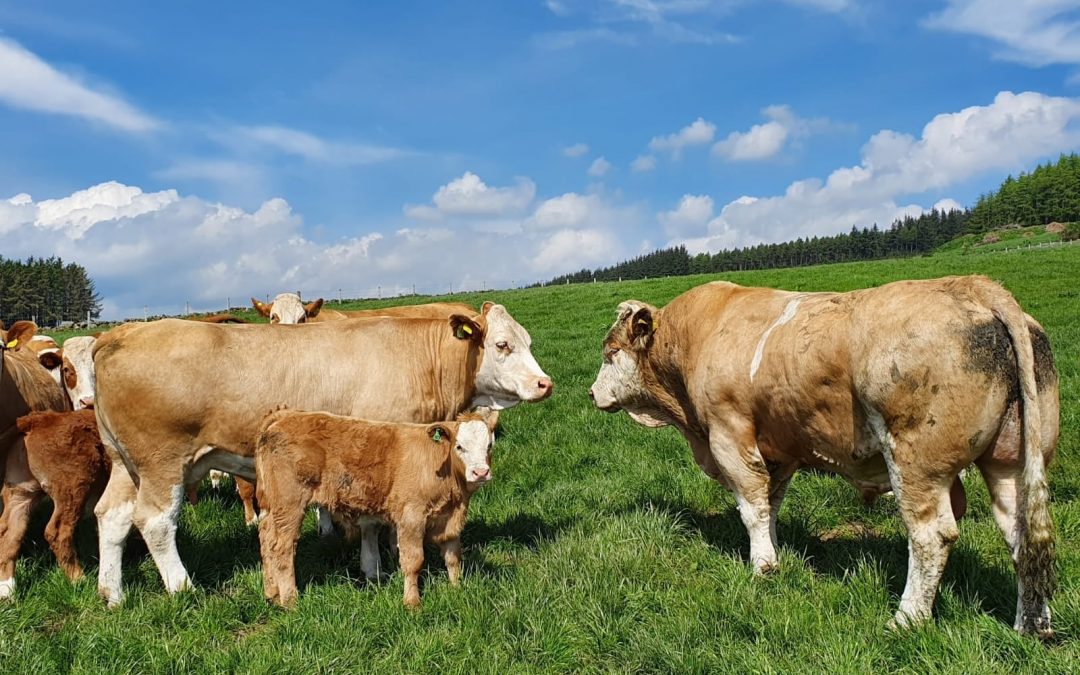 AT CAITHNESS, ABERDEEN, HUNTLY, DINGWALL, LOCKERBIE, PENRITH, DUMFRIES, DUNGANNON, HEXHAM, LANCASTER, MARKET DRAYTON, EXETER, AND HALLWORTHY. We kick off this week with the sale of prime cattle on 21st June at Exeter, which saw well finished prime cattle from David Slade of Chagford lead the gross trade with his 630kg Simmental heifer rising to 221ppk and £1389.  Further quality Simmental bred heifers from Andrew and George Palk of Paignton ran to 211, 209 and 207ppk with one at 574kg realising £1173.

BALGRAY HILL SIMMENTAL FEMALES WITH CALVES AT FOOT SELL TO £2550

The first part of the dispersal sale of DR Cornthwaite, Balgray Hill, Lockerbie, held today, Tuesday 22nd June, at Harrison & Hetherington’s Lockerbie Mart saw Simmental cows and heifers with calves at foot sell to a top of £2550 with further lots at £2500 (x2), £2400, £2350, £2250 and with a number over the £2000 mark. The sale, with 120 Limousin and Simmental heifers and stock cows with Limousin & Blue calves at foot forward, saw every lot sell to average just under £2050. The top Simmental price of £2550 was paid for a May 2018 born female sold with an April born Lim bull calf at foot, with the outfit being knocked down to J&I Pattinson, Bonshawside, Kirtle Bridge, Lockerbie. J M Goldie, Newbie Mains, Annan paid £2500 for a rising five year old Simmental cow with her May born Limousin heifer calf at foot. Also at £2500 was an April 2018 born Simmental sired female sold with her April born Limousin heifer calf at foot to J&I Longlands, Tone Hall Farm, Bartley, Hexham.

At Hallworthy on 17th June, 200 stores again saw plenty of confidence in the rising trade. A cracking run of cattle were headed by Mr & Mrs Rogers of Sydenham Damerel with a deep bodied Simmental x Steer with plenty of power to £1300. In the younger cattle, week after week the quality is high and with the trade to follow. Jim Buckland of St Buryan topped out at £1085 for 3 Steers at 12 months, their pure Simmental Steers with power and shape were a super sight.

C & D Auction Marts Ltd held their fortnightly sale of store and breeding cattle in Dumfries on Monday 14th June 2021. In the breeding bulls a Simmental from Springfield topped at £2500.

Still on 14th June and Hallworthy’s TB restricted sale  of 140 store cattle saw probably the best standard of cattle through this year. An outstanding run of 80 Cattle from A R Hooper & Son of Boscastle saw a top of £1375 for a Simmental x Steer with depth and fleshing as with all his Cattle, next a pair of Simmental x Steers to £1355, and a very smart Simmental x Steer to £1300.

At the sale of Calves & Stirks, Store, and OTM cattle held at NWA’s Lancaster Mart on Friday 11th June,  cracking day in the calf ring saw an entry of 108 forward. A Simmental steer from J R Newsham & Son, Conder Green topped the trade selling to £530.