First in his class and reserve champion overall, Glebehill Nut, owned by father and daughter partnership RW and G Hudson, topped the bidding at the Annual Autumn Show and Sale of Simmental Bulls and Females at Carlisle. 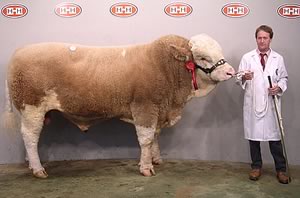 Nut travelled from Nottinghamshire and then on to Oxfordshire after he had been purchased by J Rixon Ltd. Out of a Yanley Maureen cow and by the Hudson’s stock bull, Glebehill Just William, whosired four of the Glebehill Royal Show team, this 22 month old bull had a beef value SM 32. 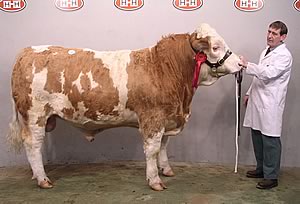 Bob Carter topped the females section with Gerrard Alice 2nd, a Slievenagh Fantastic first calver. She went southwards to Ecclesfield, Sheffield with Mr & Mrs Keen who hope to join the show circuit with her next year. A number of other buyers went home disappointed and a bigger draft of females must be the message for all vendors next year.