The British Simmental Society held its Annual Spring Sale at Carlisle and drew a strong crowd for the quality entry of bulls and females. The sale saw an increased entry and averages were up £75 for the bulls on the previous year with more sold giving a 78% clearance. Buyers and sellers alike had come from all over the country for this increasingly popular sale. 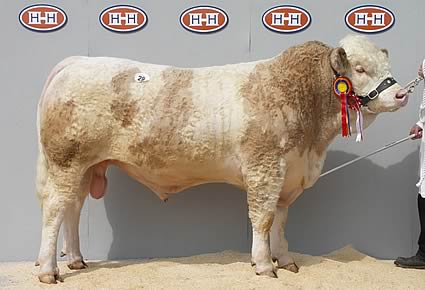 The Reserve Champion, Taurus Topic, from R. & V. Loud, Alstone Court Farm, Highbridge, Somerset followed the judges recommendation, when he made the second top price of the day at 2,800gns. Another January 2006 born bull, Taurus was sired by Scotland Hooray Henry and went to The MacAuley Land Use Research Institute, Hartwood Home Farm, Shotts, Lanarkshire.

Mrs. A. Springfield Farm, Greysouthern, Cockermouth, was delighted to see her third prize winner from the first class in the ring, change hands at 2,400gns to Miss Sybil McBryde, Lochmaben, Lockerbie. Rooklea Starwars is a two year old son of Hepplewhite Kong bred by Alison’s father, the Society Vice President, John Trafford. Blakewell Schubert, from I. & M. Steel, Blakewell Farm, Easington, Hull, who took first prize in Class Two, sold to E.D.Jones & Son, Plas Farm, Llangorse, Brecon, Powys for 2,300gns. He is a son of the famous Blackford Harvester and out of the homebred Blakewell Melody.

Messrs Innes Farms made the long journey from Millbrae, Findhorn, Forres, Morrayshire, to purchase the first lot in the ring, Caister Neptune. Neptune, a five year old stock bull from Brian Lundy, Caistor Moor Farm, Caistor, Market Raisen, Lincs, had been an outstanding stock bull to date with a distinguished show record. A son of the home bred Caistor Karl by Gretna House Supersonic, he changed hands for 2,000gns. This was the first of five bulls to make 2,000gns.

A good show of females of various ages saw all but one of the entries forward find new homes. The 1st prize winner in the first show class of the day, sold to J. & K. Martin, Lower Muirhouse, Cleghorn, Lanark for the top price 2,600gns. Astcote Robyn, a Blackford Harvester embryo daughter from S. & C. Evans, 21 Shoemaker Close, Astcote, Towcester, Northants was sold with her 1st August born heifer calf at foot, Astcote Teasel by Agardsley Bruno. She was followed shortly afterwards by Midhope Rhoda, a heifer from W.J.Hollingsworth, Midhope Hall Farm, Midhopestones, Sheffield, who was sold in calf to Pasturehouse Paleface and changed hands at 2,300gns. She had stood 3rd in her class earlier in the day.

In the unhaltered section, the second cow in the ring, Blackpool Nancy, a Gretna House Jackofalltrades daughter, from J.D. & A. Loftus, Lodge Farm, Thisleton, Kirkham, Lancs sold to N Shand, Cairnorrie Farm, Methlsk, Ellon, Aberdeenshire for £2,000 with her bull calf at foot, Blackpool Trident. Trident is a son of Blackpool Radar and she was in calf again to Dirnanean Shane.