Local young breeders Tom and Jack Peile along with their parents John and Elizabeth Peile, secured the supreme championship title and the joint top selling price at the annual spring show and sale on behalf of the Simmental Cattle Society at Carlisle. 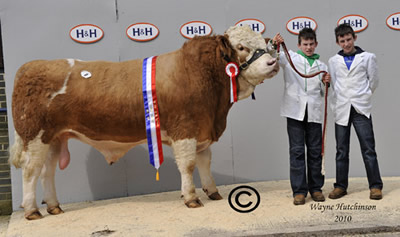 Their 21 month old entry, Pasturehouse Wizard, a son of Harestone Hercules and bred from a Caistor Kaiser sired mother, is no stranger to the show ring as Tom and Jack had Wizard on the 2009 show circuit as a calf. He was successfully purchased by J Gemmell & S Earnshaw for their Thorntree herd based at Wakefield. 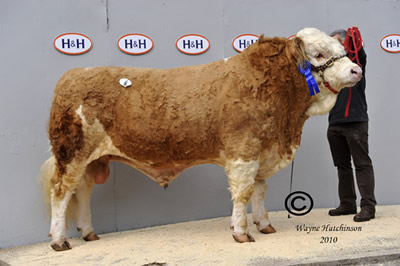 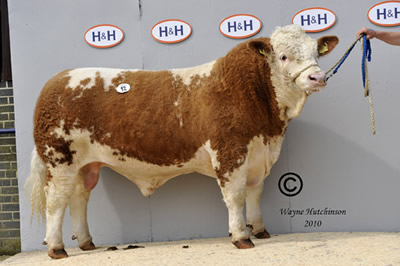 Reaching the 4,000gn mark was P Burgess of Daventry Northants with his 19 month old bull Tilbrook Wainwright. Sired by the noted Kilbride Farm Newry and bred from a Blackford Harvester daughter, Wainwright was knocked down to Messrs McDowall & Co of Glenluce, Newton Stewart.

Staffordshire breeder Joe Ede of Stoke on Trent topped his pen of bulls at 3,000gns with an October 2008 born entry. Fole Wavelength is a son of the Royal Welsh show winner Fole Telstar and out of a home bred daughter of Greenlea Mountineer. He now travels to Kirkcudbrightshire to join the Highborgue herd for R & I Watson. 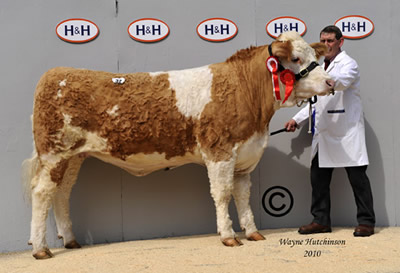 Topping the female section at 2,000gns were two in calf heifers. The first to reach this price was the Female and Reserve Supreme Champion of the sale shown by East Yorkshire breeders I & M Steele. Blakewell Pandora’s Virginia, a daughter of Blakewell Subzero and out of one of the herds prominent cow families, the Gayles Pandoras. Virginia sold in calf to Blakewell Warrior and was purchased by Angus breeder CMR Soutar for his Peasiehill herd.

The second heifer to sell for 2,000gns was the days Reserve Female Champion was also from the Blakewell herd of Messrs Steele. Blakewell Judith’s Valerie, another daughter of Subzero and bred from a Sterling Herkules sired mother, also sold in calf of Warrior. Valerie also travels with her pen mate and goes to the Peasiehill herd.