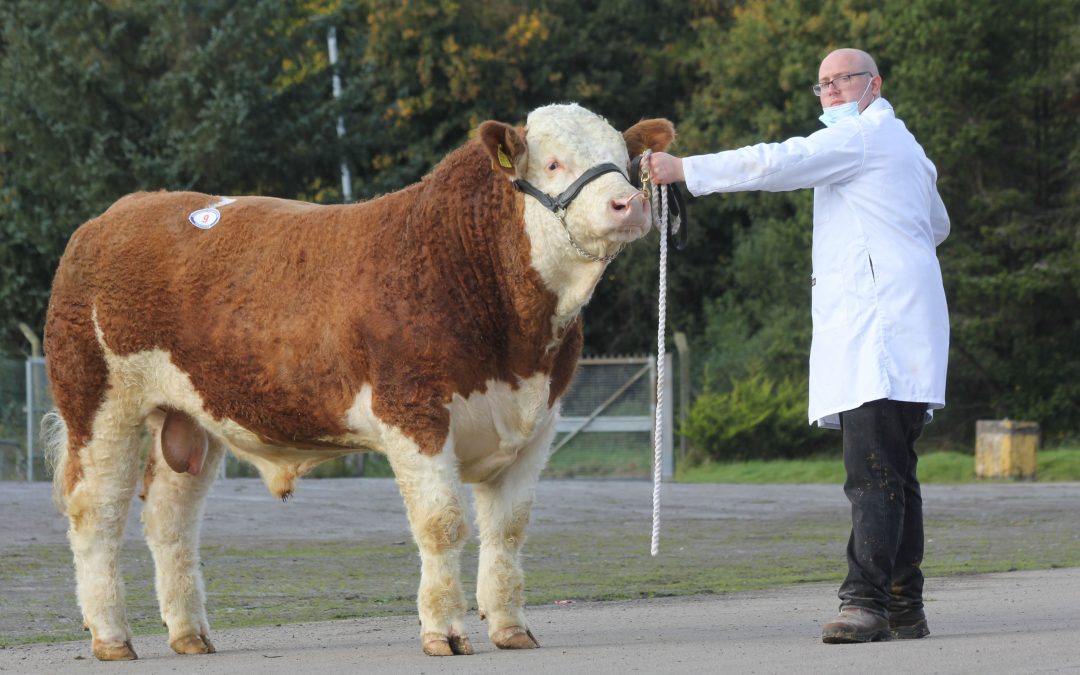 A small entry of pedigree bulls sold to a top of 3,500gns at the Northern Ireland Simmental Club’s autumn sale, hosted by Dungannon Farmers’ Mart on Friday, 23rd October.

The sale, generously sponsored by Bimeda, saw four bulls sell to average £2,861 each – an increase of £516 on this time last year.

Claiming the day’s top price, and setting a new herd record of 3,500gns, was local Pomeroy breeder David McElmurry, who established his 12-cow Wellbray herd in 2014. The fifteen-month-old Wellbray Kingbee 19 is sired by Kilbride Farm Warren, and is the first calf from the home-bred Kilbride Farm Dragoon daughter Wellbray Bella.

Kingbee is in the breed’s top 10% for milk and caught the eye of pedigree herd owner Aaron Smyth who runs the 8-cow Gortnacarry Herd alongside a 40-cow commercial suckler enterprise based at Culnady, Maghera. “This bull is a long, clean and deep-bodied, with a level back, breed character and good legs and feet,” said Mr Smyth.

Second highest price of the day at 3,000gns, went to William Nelson, and son George, from Rosslea, for the fourteen-month-old Drumacritten Kyle.

This bull was sired by the 2014 and 2015 Balmoral Show breed champion Dermotstown Delboy, and is out of the home-bred Omorga Volvo daughter Drumacritten Gaby GP84. Ranked in the breed’s top 15% for calving ease at +3, this one sold to suckler farmer David Wright from Caledon.

The same vendors realised 2,400gns for the fourteen-month-old Drumacritten Ken. Another by Dermotstown Delboy, this one is bred from the Omorga Murray daughter Drumacritten April – one of 12 cows in the County Fermanagh herd. Buyer was E Rutledge from Fivemiletown. 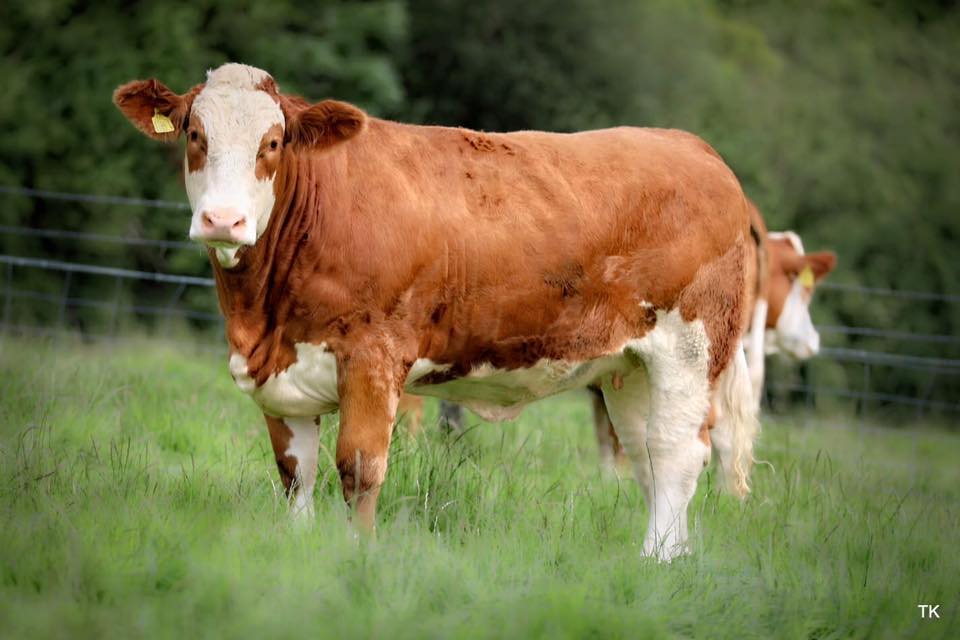 The much anticipated third production sale from the Ranfurly and Ballinalare pedigree Simmental herds, held on Friday 4th September at Dungannon Farmers Mart, met with a strong demand and a healthy trade that saw a top price of 7000gns, and further prices of 5600gns, 5500gns, 5200gns.  In all eleven lots from the forty-three sold made 4000gns or more. The sale attracted interest from all over the UK and Ireland with animals selling to Scotland, England, Wales, republic of Ireland, and Northern Ireland. Many of the lots were sold through online bidding in addition to the registered audience at ringside.

Taking the top price at 7000gns for Mr WD & JD Hazelton, Cohannon House, Dungannon, Co Tyrone,  was the January 2019 born heifer Ranfurly Beauty 13th K2.  By Grinalta’s Excel 8N, she is out of Ranfurly Beauty 8th F9 (ET).  Beauty’s dam is a genetic full sister to Curaheen Tyson, Vio and Bandit, the same cow family as the 16,500gns Beauty 5th C4.  Heading over to Scotland this heifer was purchased by Mr WS Stronach for his well-known Islavale herd at Berryleys Farm, Grange, Keith, Banffshire.  Commenting on his purchase Stewart Stronach, who had travelled over to N Ireland last week to see the Ranfurly cattle before bidding online on sale day, said:  “I really liked what I saw across all of the sale cattle, they were ready for the sale, not over done, and looking 100%.  Ranfurly Beauty 13th K2 is just our style of heifer with a lot of potential for the future.  She brings something different in the bloodlines for us to try being by the Canadian bull and combines that with proven breeding in the dam line.”  The Islavale herd presently comprises of 150 pedigree breeding females run with 50 commercial Simmental cows.

The Ranfurly herd put forward eighteen lots on the day which averaged a terrific £4243.75.  Founded in 1971 the Ranfurly herd has consistently been a top performing pedigree Simmental herd both within the sale and show ring.  Offering a high health status and a depth of breeding, the herd presently comprises of seventeen cows all of which are classified as excellent or very good. Commenting after the sale a delighted David Hazelton said: “We are extremely pleased with the sale and trust that the cattle go on to do well for their new owners. Over the years we’ve placed emphasis on proven cow families being mated to proven bulls. Focusing on the market place we are trying to breed cattle that are relevant to both the pedigree breeder and commercial producer. To do this we’ve used performance recording and the classification scheme as helpful tools which has worked to advantage.”

The day’s second top price was the 5600gns paid for the maiden heifer Ranfurly Weikel 30th K1.  January 2019 born this heifer, which was a junior heifer class winner at the NI Simmental National Show at Omagh in 2019,  is by Cleenagh Flasher and is out of Ranfurly Weikel 18th H2.  Another to go over the water, this animal was purchased by B & E Chadwick for their Chadston pedigree herd at The Hedgerows, Hilton, Derby.

The very last lot in the ring, Ranfurly Weikel 38th L5, confirmed the day’s strong trade when making 5200gns.  January 2020 born, this heifer calf is by Carnkern Titan and out of the noted South Park King Kong Weikel 2nd EX 93.  Combining pedigree and performance, Weikel 38th L5 is a full sister to Ranfurly Formula One,  Supreme Champion at Stirling October 2016, who sold for 15000gns. Purchasing this calf was SP McDonald who runs the pedigree Coolcran herd at Coolcran, Tempo, Co Fermanagh.

The top price in the Ballinalare herd offering from Mr J & Mr A Wilson, Dorans Hill, Newry, Co. Down, was the 4900gns paid for Bannhill Farm Jinx.  April 2018 born this heifer, scanned in calf to  Rabawn Ernie, is by the noted Raceview King, and is out of Ballinalare Farm Fleur, an Auchoracan Wizard daughter.  This calf was snapped up by Mr DG Rooney for their Veaghmore pedigree herd at Ballymartin, Newry, Co Down.  The second top price from the Wilson’s offering was the 4400gns paid for the September 2018 bor Bannhill Farm Juliet.  This heifer, by Kilbride Farm Bantry and out of Ballinalare Farm Fuscia, was sold scanned in calf to the noted Camus Brandy.  Heading to the Republic of Ireland, this heifer was bought by G Neenan, Coolnafarna, Ballyhaunis, Co Mayo.

At 4800gns was the September 2018 born Ranfurly Kleeb 41st J14.   With a full brother having previously sold at Stirling for 6500gns, this heifer is another by Team Celtic 11 and is out of Ranfurly Kleeb 32nd D14 EX 92.  Again with a strong Milk figure of +17, Ranfurly Kleeb 41st J14 was bought by Mr JN Glasgow for his Bridgewater Farm herd at Creevagh Road, Cookstown, Co Tyrone.

The very next lot, and from similar breeding, Ranfurly Weikel 34th K12 sold for 4500gns.  This ET calf is by Salisbury Challenger and out of the noted South Park King Kong Weikel 2nd EX93.  Buying this lot was W McKittrick, Ternagreeve Road, Loughgall.