Changing of the colours at Pitgaveny

Pitgaveny Estate in Moray has been in the Dunbar family ownership for many generations, extending to 2000ha (in excess of 4900acres), of this 1000ha remain in the farming enterprise, with 284ha ran organically, it is run by Farm Manager Martin Birse with Stockman Geoff Anderson responsible for the livestock.

The Suckler herd is split into two calving periods, 100 backend calving cows and 120 spring calvers, all of these are now Simmental cross.

In 1996 the decision was made to close the herd, predominately for health reasons, and at the Perth Bull sales in February 1996 Innerwick Eclipse was bought for 5500gn. It was this first Simmental purchase that started what has turned into a passionate following for the Simmental breed. In recent years five bulls have been purchased at prices of 10000gn or more with Martin insisting that “it pays to invest in quality and whilst paying considerably over the average price for bulls they are consistently breeding better than average calves”. The herd sires at present are Pasturehouse Snickers, Corskie Woody, Grangewood Storm and the most recently purchased 11,000gn Drumacritten Arnold. 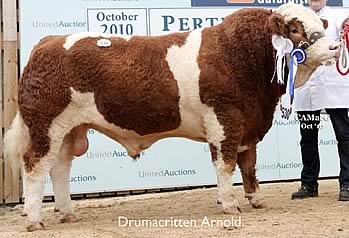 This initial Simmental purchase led to a complete changing of colours at Pitgaveny, originally all the herd sires were Charolais but the performance of the Simmental and the demand for surplus Simmental heifers, coupled with a desire to have easier calving and instant suckling of calves led to all Charolais being replaced by Simmentals.

All the cows run in and out prior to calving to keep them physically fit, the backend cows graze on sparsely covered fields and on straw while inside overnight, after calving they are fed silage/ draff and straw with minerals. The spring calvers are out-wintered on stubble turnips and a TMR ration made up of pea straw/draff/minerals and then silage is added one month prior to calving. 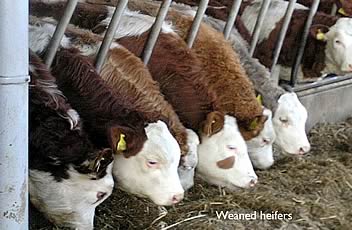 The Spring born calves are weaned at just over six months of age and by this time the bull calves are taking 5kg a head per day resulting in no standstill period after weaning. Bulls are then fed a barley based ration with clean straw available but not mixed through the feed as this can reduce total intake, they are marketed through Vion and Mathers and are all finished under 14 months with over 90% achieving grades of U– or better. The Autumn born bull calves are weaned prior to the cows going to grass and then finished the same way as the spring born calves.

The heifers are treated in a completely different manner, spring born calves are over-wintered on a silage/straw ration with minerals but no concentrates then grazed one full season before being sold off the grass at approx 17-18 months old. The Autumn born calves are overwintered after weaning and then sold out of the house again at 17-18months old. The majority are sold privately at £400 per head above store price with most buyers nowadays being repeat customers.

It was this premium along with the ability of the bulls to finish and grade well that drove the change of colours from Charolais to Simmental at Pitgaveny.

Bull selection is important for Pitgaveny and all tools are used with particular attention to calving ease EBV’s, calving daughters and 200 day weights.
Whilst buying bulls at the top end of the sale is not for every commercial farmer. Martin calculates that on average it only adds £30 to the price of each calf over the normal breeding life of a bull, but he reiterates that this is a sound investment.