Pedigree Simmental bulls reached a ceiling of 4,200gns at the spring show and sale, hosted by the Northern Ireland Club at Dungannon Farmers’ Mart on Tuesday 13th March 2012.

Quality bulls met a ready market, and following a 92% clearance auctioneer Trevor Wylie confirmed that 22 bulls changed hands to average £2,866 – an increase of £270 on this time last year when 18 lots leveled at £2,596.

Sale topper at 4,200gns was the first prize winning Scribby Farms Barney, a seventeen-month-old entry by the Dripsey Super King son, Leeherd Woodstock. Consigned by the Nelson family – William, Margaret, George and Keith from Rosslea, County Fermanagh, his dam is the Madera daughter, Ready Penny Sheba. He has a terminal sire index of +36 and a self replacing index of +33, and sold to Alexander and Kathryn Ross who run 60 suckler cows at Newtownards, County Down.

The first bull into the salering, Ashland Bingo, attracted the second highest price of the day for the father and son team of Pat and Frank Kelly, Tempo, County Fermanagh. Born in July 2010 he is by the Starline Nelson son, Dirnanean Salvador, and is out of a daughter of the herd’s stock bull, Raceview Nigel. His Breedplan figures include an eye muscle area of +3.8, placing in the top ten per cent of the breed, a TSI of +78 and an SRI of +70. This second prize winner caught the eye of James Savage from Portaferry, County Down.

Following close behind at 4,000gns was the day’s male and reserve supreme champion Kilbride Farm Blizzard brought out by Billy Robson OBE, and sons Michael and Norman from Doagh, County Antrim. Sired by the home-bred Kilbride Farm Newry son, Kilbride Farm Warren, this fourteen-month-old bull is out of a dam by Seaview Prince Charming. He was snapped up by Stephen Dunn from Killyleagh, County Down. This one is +6 for milk, has a TSI of +64 and an SRI of +65.

Next best at 3,600gns was the third prize winning Longbeach Barry bred by Sean Burns, Rathfriland, County Down. Sired by the Cleenagh Flasher son, Omorga Volvo, this September 2010 born entry is out of a home-bred Brinkton Brilliant daughter. He is in the breed’s top five per cent for eye muscle area +4.1, TSI +80 and SRI of +90. Highest bidder was Jerome McCaffery from Belleeks, Newry, County Down.

Leslie and Christopher Weatherup, Ballyclare, County Antrim, realised 3,300gns for the first prize winning Lisglass Bionic ET. Born in September 2010 he is the result of a mating between Kilbride Farm Newry and the Carnkern Titan daughter, Cleenagh Hazel – full sister to the noted brood cow Cleenagh Daffodil. He is +7 for milk, has an eye muscle area of +3.1, a TSI of +67 and an SRI of +76. Buyer was Brian Edgar from Downpatrick, County Down.

The day’s male and supreme overall champion Ashland Boomerang came under the hammer at 3,000gns for Pat and Frank Kelly. Sired by Omorga Volvo, this August 2010 born bull is bred from the Seighfried daughter, Ashland Terrific Lucy. He is in the breed’s top five per cent with an eye muscle area of +4.3, and in the top one per cent with a daughter calving ease score of +5.2, a TSI of +91 and an SRI of +115. Highest bidder was John Todd from Portadown, County Armagh.

Also selling at 3,000gns was the fourth prize winning Derrycallaghan Bumper TSI+59 and SRI+54, brought out by Harold Stubbs, Lisbellaw, County Fermanagh. Born in July 2010 he is by the Wroxall Field Marshall son, Slimero Victory, and is out of a home-bred dam by the noted Carnkern Titan. This one was snapped up by M Burleigh, Kinawley, County Fermanagh.

The third and final bull to command a bid of 3,000gns was the unplaced Slievenagh Brigadeer from Robin and Darla Boyd’s herd at Portglenone, County Antrim. This fifteen-month-old bull was sired by the 22,000gns Omorga Samson, and is out of a home-bred dam by the 12,000gns Slievenagh Fantastic. He sold to Keith Dickson from Moneymore, County Londonderry. This one is in the breed’s top ten per cent for calving ease +4.1 and eye muscle area +3.6, and has a TSI +69 and an SRI+74.

The collective entry of Simmental females reached a peak of 3,700gns, with ten heifers achieving a complete clearance to average £2,063 each.

A top call of 3,700gns was paid to the Robson family for their female champion, Kilbride Farm Eunice 115B. This October 2010 born heifer was sired by Kilbride Farm Newry, and is out of a home-bred Carnkern Titan daughter. Buyer was Mr J Fegan, Castlewellan, County Down.

The third prize winning Inishrush Whitney 1st came under the hammer at 2,100gns for John Whyte, and sons William and Philip, from Portglenone, County Antrim. Born in October 2010, she is by the 15,000gns Cairnview Snazzy, and is out of a home-bred dam by Omorga Prince. This one sold to Eric Lindsay from Strabane, County Tyrone.

Reserve female champion was the December 2010 maiden heifer Drumbulcan Bianca, shown by Kenneth and Avril Stubbs, and daughters Zara and Alice, from Irvinestown, County Fermanagh. Sired by Kilbride Farm Newry, she is out of a home-bred dam by stock bull, Omorga Regan. Selling for 1,800gns, she joins Duncan McDowell’s herd at Newtownards, County Down.

The pre-sale show was judged by Robbie Mulligan, Banbridge and sponsored by Northern Bank; while the commercial section of the sale was sponsored by Connon General Merchants based at Ballymena.

Results from the pedigree judging ring include: 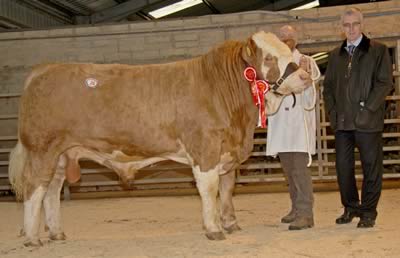 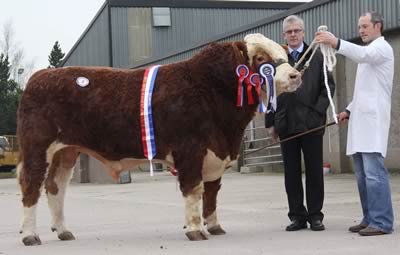 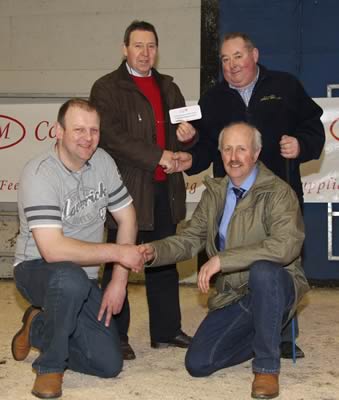 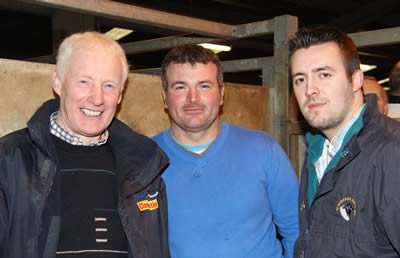 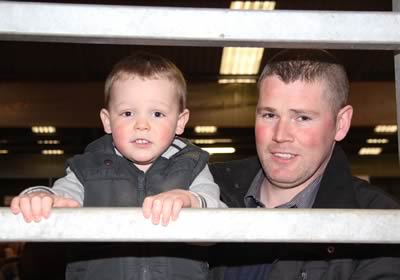