There was standing room only around the salering as auctioneer, Trevor Wylie, conducted the pedigree bull and heifer sale, which was followed by a strong entry of commercial Simmental females.

Pedigree bulls reached a ceiling of 2,800gns, and the six lots on offer sold to average £2,275 per head. Pedigree heifers peaked at 1,550gns, while eight lots changed to hands to level at £1,345 each. 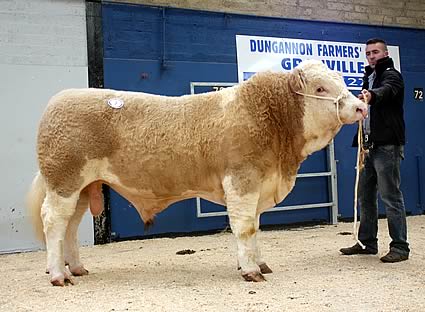 Topping the pedigree bull offering at 2,800gns was the August 2009 born Camus August, bred by Joe and May Campbell, Strabane, County Tyrone. Sired by the Gretnahouse Supersonic son, Newborough Envoy, he was bred from a Brinkton Brilliant dam. This bull is +1 for milk and has a Breedplan termina l sire index of +19. He sold to E McKee from Downpatrick.

Next best at 2,400gns was Killynure Actionman, a yearling bull from Raymond Porter’s herd at Omagh, County Tyrone. He was sired by Omorga Murray – a son of the 21,000gns Corrick Kentucky Kid – and is out of a home-bred dam by Killynure Jon Jon. He is +4 for milk and has a terminal sire index of +19, and joins Adrian Richardson’s Cleenagh herd based at Maguiresbridge, County Fermanagh.

New breeders Cathal Murphy and Sean Doonan from Macken, Enniskillen, made their debut in the Simmental salering, selling Clonmolly Attrition for 2,200gns to pedigree breeder, Jim Hamilton, Rock, Dungannon. Born in June 2009, he was sired by the Raceview King son, Dripsey Super King, and is out of an Omorga Murray daughter purchased privately from Andrew Hanna’s Stralongford herd. The Clonmolly herd was established two years ago and comprises of three pedigree cows. 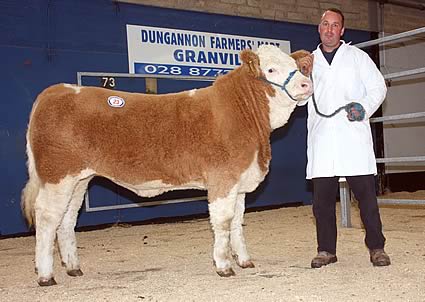 Leading the pedigree female offering at 1,550gns was Rehall Amanda, a yearling heifer consigned by the father and son team of William and Keith Stubbs, Irvinestown, County Fermanagh. She was sired by Hockenhull Maverick, and is out of a home-bred Omorga Regan daughter. The successful bidder was G Morris from Omagh.

Following close behind at 1,500gns was Owenskerry Winnie, a December 2008 born heifer brought out by first-time exhibitors, Brian and Linda Cowan, and son, Craig, from Fivemiletown. Sired by Dripsey Super King, and bred from the Towerhill Nathan daughter, Kilcorn Rebecca 2nd, she caught the eye of new breeder Chris Traynor, Armagh.

The noted Kilbride Farm Newry was behind the breeding of Inishrush Keira which sold at 1,350gns for John Whyte and Sons, Portglenone. Born in September 2009, she was bred from a Samark Nevin daughter, and caught the eye of pedigree breeder, William Dodd, Saintfield.

Speaking after the sale, Pat Kelly, chairman of the Northern Ireland Simmental Cattle Breeders’ Club said he was delighted with the outcome of the sale. “The harvest sale can be sticky enough for pedigree bulls, but there was brisk bidding with almost all of the bulls finding new homes.”

“There was a tremendous trade for the cross-bred female entry, and 52 lots sold to average £898 per head. The success of the sale is testimony to the breed, and backs up the fact that Simmental is the first choice for many suckler herd owners throughout the Province.”