A strong commercial demand underpinned trade at the Multi Breed Event at Newark Livestock Market, which saw a top price of 5000gns for the Male and Overall Simmental champion.

Sale leader and coming through as champion Simmental under judge Brian Wise was Burghbridge Bradley from Otley based Charles Clarke by Brinkton Major and out of the Strathisla Popeye daughter Burghbridge Emily, he was knocked down to Paul Gunther for his Fircovert herd, Norfolk.

Next in the money at 4000gns was a bull from the same home, this time Burghbridge Briar, another Major son, this time out of a Popeye daughter Burghbridge Vienna. Buyer here was G White and Son, Manor Farm, Alford, Lincs.

The second prize Williams Connolly from Hayley Clarke, Hevingham, Norfolk, then sold at 3000gns. This one is by the successful show bull Heathbrow Tristar and is out of a Dirnanean Reformer daughter Tillymaud Danielle 33rd and sold to A Greaves, Top Farm, Retford, Nottinghamsire while at the same money was the Dowley family, Lieston, Suffolk, sold Theberton Bomber, a Burghbridge Nero son out of a Craighill Number One daughter, to James Knight Farm, Manor Farm, Walcot, Falkingham. 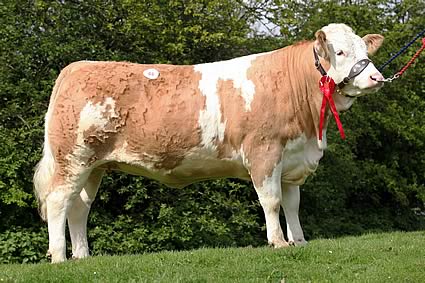 The Simmental female and Reserve Overall Champion, Midhope Vixen 2nd, from Messrs Hollingsworth sold for 3200gns. Born February 2010, she is by Dirnanean Snowie and is out of the Pasturehouse Paleface daughter of Midhope Vixen and carries a TSI of +87 and an SRI of +85. Buyer here was Messrs Fovargue Bros, Bottom Farm, Town Farm, Coalville, the Edroda herd. The same buyers also purchased the Reserve Female champion, Grangewood Beverly from the Leedham family, at 3100gns. This one is February 2010-born as well and is by the Starline Klassik son Tilbrook Turpin and is out of Grangewood Tanya, who is a daughter of Riverdale Figaro.