Prices reached a ceiling of 12,000gns, and 20 lots sold to average £3,654 per head, at the 40th Anniversary Elite Female Show and Sale, held at Omagh.
The event, hosted by the Northern Ireland Simmental Cattle Breeders’ Club, attracted numerous breed enthusiasts from throughout England, Scotland, Wales, and the north and south of Ireland. 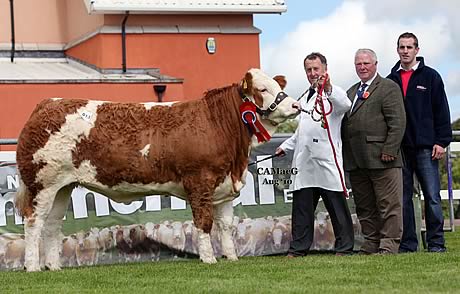 Hitting the headlines, and setting a new record for a Simmental female sold in Northern Ireland, was the much-admired Cleenagh Avon bred and exhibited by Adrian Richardson, Maguiresbridge.

She caught the eye of judge, Hector Macaskill from Dunbar, East Lothian, to take the supreme championship honours at the pre-sale show. “This is an excellent heifer,” explained Mr Macaskill, who is president of the British Simmental Cattle Society. “She is long and clean, and has fantastic shape. I can’t fault her in any way.”

Born in March 2009, she was sired by the Corrick Kentucky Kid son, Omorga Murray, and is out of the prize winning Raceview King daughter, Cleenagh Trudie. She made her debut at Armagh Show in June, where she stood first in a class of eight heifers, and went on to win another red rosette at Omagh Show, before scooping the runner-up title in the prestigious NISA Ulster Bank Beef Heifer Championship. This heifer attracted considerable attention prior to the sale, and won many admirers at the Omagh Anniversary event.

Auctioneer, Noel Erskine, secured an opening bid of 5,000gns, and after a bidding frenzy she was knocked down to Ronnie Wilson from Garvary, Enniskillen, who had fought off strong competition from ringside bidders and an eager telephone bidder. 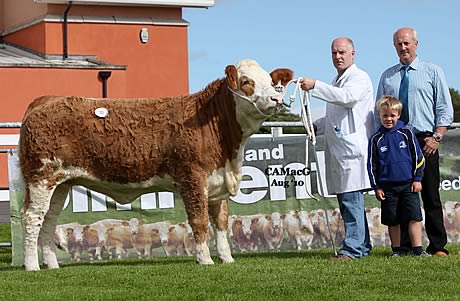 The reserve supreme championship was awarded to Kilbride Farm Dora 34a, a February 2009 born heifer exhibited by breed stalwart, Billy Robson OBE, and sons, Michael and Norman, from Doagh, Ballyclare. Described by the judge as ‘a stylish heifer’, she was sired by the herd’s 15,000gns stock bull, Cairnview Snazzy, and is bred from a dam by Seaview Prince Charming. She came under the hammer at 6,000gns, selling to pedigree breeder, David Donnelly, who runs the Atlow herd based in Derbyshire.

The Robson trio sold three heifers from their long-established Kilbride Farm prefix to average £3,955 per head. Next best from the Robson stable at 3,200gns was Kilbride Farm Dora 36a, a March 2009 born heifer by the highly successful AI sire, Kilbride Farm Newry. She is out of a home-bred Milnafua Graduate daughter, and was snapped up by Colin Inglis from Fife, Scotland. 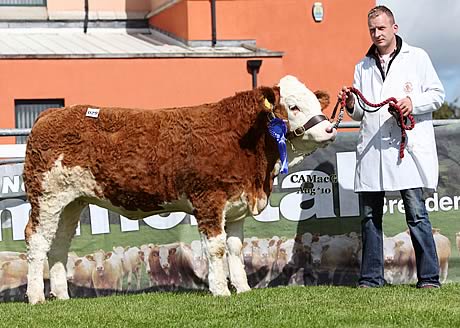 Third highest price of the day, 5,100gns, went to David Hazelton, who sold five heifers from the Ranfurly herd based at Dungannon to average £3,612 per head.

Leading the Ranfurly offering at 5,100gns was the second prize winning Ranfurly Lady Diana 13th. Born in September 2009, she was one of the youngest heifers catalogued, and is a Seabank Flint daughter bred from a dam by Carnkern Titan. The successful bidder was new breeder, Chris Traynor from Armagh.

Following close behind at 5,000gns was the second reserve champion, Cleenagh Alexis, also forward from Adrian Richardson. Born in September 2009 she is by the Raceview King son, Dripsey Super King, and is out of a home-bred dam by Omorga Murray. This one joins the Solitude herd owned by John McMordie, and sons, William and Andrew from Ballygowan, County Down.

Next best at 4,800gns was David Hazelton’s Ranfurly Weikel 5th, an unplaced June 2009 born Balist daughter bred from the herd’s prolific brood cow, South Park King Kong Weikel 2nd – who has bred sons to a top of 9,000gns. This heifer is a half sister to the 2010 Reserve Female of the Year, Ranfurly Weikel 3rd, and was snapped up was Brendan McNamee, who is establishing a new herd at Sixmilecross, County Tyrone.

Cecil McIlwaine, and sons, Scott and Neil, from Newtownstewart, realised 4,000gns for the first prize winning Corrick Amber 2nd. Born in May 2009 she is by the Sterling Flint son, Omorga Tarbuck, and is out of a home-bred dam by Carnkern Titan. The successful bidder was Chris Traynor, Armagh.

Omorga Tarbuck was also behind the breeding of Corrick Amanda 09, which realised 3,400gns for the McIlwaine family. This July 2009 born heifer is bred from Corrick Trixie-Bell – a daughter of the herd’s record priced 21,000gns Corrick Kentucky Kid. She joins the noted Curaheen herd owned by David Wall, Newcastle, County Dublin.

The first lot into the salering was Ranfurly Kleeb 22nd, a September 2008 born Whitemire King Kong daughter, bred from a Balist dam. She realised 3,300gns for vendor, David Hazelton, and was snapped up by pedigree breeders, Alan and Ann Kennedy who run the Lurgill herd based at Upper Ballinderry, Lisburn.

Breed society president, and pre-sale judge, Hector Macaskill, congratulated the Northern Ireland Simmental Cattle Breeders’ Club, and its members, on a successful event. “I am delighted and honoured to have been invited to judge at this special event in the breed’s history. It has been a great event, with some very strong classes. The top end in each class were outstanding, and it is definitely as good a show of cattle as you would get anywhere in the UK.”

The Northern Ireland Simmental Cattle Breeders’ Club is indebted to its sponsors, without whom this event would not have been possible. They include: Irwins Feeds, Eglish; Woodcraft Kitchens, Kilrea; John Thompson and Sons Ltd; Redrock Machinery; McGirr Haulage Ltd, Tempo; Millburn Concrete Ltd, Cookstown; and Lafarge Cement. 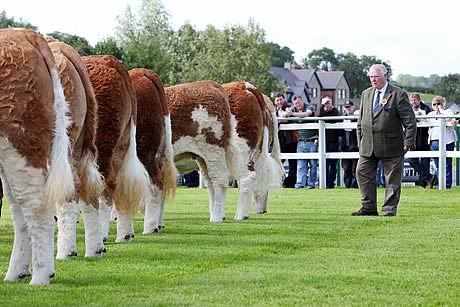 Other leading prices include: