Nothing to beat Simmental on Stewartstown suckler farm

Simmental is the ultimate breed of choice for suckler herd owners Robert Ferguson, and son William, from Sperrin View Farm, Stewartstown, County Tyrone.
The father and son duo run a herd of 60 suckler cows, alongside an intensive 150-sow birth to bacon pig enterprise. 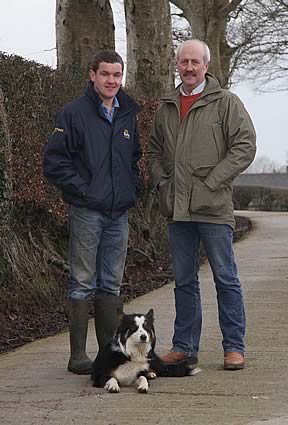 The suckler herd comprises of 46 commercial females, the majority of which are three-quarter-bred Simmentals, while the remaining 14 cows form the Sperrin View pedigree Simmental herd which was founded shortly after William graduated from Greenmount College ten years ago.

“Simmental is without doubt a true dual purpose breed. The cows are superior mothers, and their progeny will match, if not surpass, the growth rates and carcase weights of other continental breeds,” explained William who speaks from experience, having finished various beef breeds over the years.

Robert and William operate a closed-herd policy, and have been members of the AFBI health scheme for two years. “The commerical herd is mainly home-bred, and we are currently using a home-produced pedigree stock bull which was retained for his excellent conformation and above average Breedplan figures,” said William. 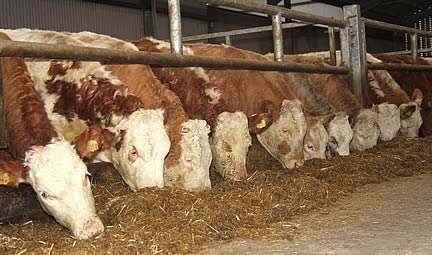 The January 2011 born Sperrin View Columbo was sired by the Cleenagh Flasher son, Omorga Volvo, and is bred from a Kilbride Farm Newry daughter. He is in the breed’s top 10% for terminal sire index +77, self replacing index +89, and eye muscle area +3.5; and has a milk value of +5.

“The Simmental bulls have a docile temperament and a long life-span. We usually change our stock bulls after a few seasons. They are still fit at five-years-old, and are sold privately to other suckler herds.”

William is full of praise for the Simmental cows. “Nothing beats the Simmental, they have it all – size, strength, fertility, longevity, mothering ability and milk. The cows are easy to manage on a low input system, and have a nice temperament.”

Eighty-five-per-cent of the herd is spring calving, and it is routinely vaccinated for Lepto and BVD. Cows calve in a straw bedded house, and weather permitting are kept outside during the day, and re-housed at night. They are fed a diet of silage, straw and minerals which is mixed using a feeder wagon.

The Fergusons farm 140 acres and their main grazing period is from March to October, but this largely depends on the weather.

The herd is divided into batches. All calves are reared naturally on their mothers at grass, and the bullocks are introduced to creep feed from four-months-of age. Weaning takes place at around seven-months-old. 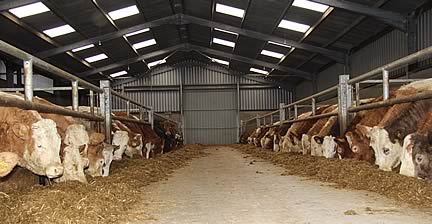 In the past Robert and William kept their male calves entire and finished them as bull beef. The cattle were achieving deadweights of around 500kgs at fifteen-months-old, with 80% of the carcases receiving U grades.

“With escalating feed prices we decided to stop bull beef production, and are now selling our bullocks as stores at between fifteen and twenty-months-of-age.”

A few weeks prior to leaving the farm the stores receive silage, straw and one kilo per head per day of a 16% crude protein blend. They are sold at a local market where they attract a strong demand and regularly secure top prices. “Bullocks sold in 2012 averaged 551kgs and sold for £1,100 per head,” confirmed William.

Robert and William have also witnessed a ready market for their Simmental heifers. The better heifers are retained as herd placements, with the remainder sold through the store ring.

William continued: “The Simmental females are healthy, and we don’t have a high replacement rate, so we are able to sell surplus maiden heifers on an annual basis. We have regular customers who buy from us privately, and we’ve also sold heifers at the Simmental Club’s commercial sale in Dungannon. Last year our heifers averaged £1,023 per head at 484kgs.”

William, who was runner-up at the 2012 Farming Life/Danske Bank Pig Farmer of the Year Awards, has represented Northern Ireland on several occasions at the Simmental society’s national stockjudging competition, and has judged at the local club’s Dungannon show and sale.

The Sperrin View herd savoured success at the recent bull sales in Stirling. Making his debut appearance William sold two bulls to average £6,562 per head. Leading his entry, and setting a new record for the herd at 6,500gns, was the twenty-month-old Sperrin View Challenger. He was sired by Keeldrum Schubert, and out of the home-bred Kilbride Farm Newry daughter, Sperrin View Trudy. His other entry was the May 2011 born Sperrin View Crossfire which came under the hammer at 6,000gns.

Concluding William added:”Simmental is an all-round beef breed and there is nothing to beat it! It is an excellent choice as a terminal sire, and the cross-bred Simmental cows are an unrivalled foundation for any profitable suckler herd.”