The Scottish Simmental Club had a very successful Open day on 3rd July 2012 at Thurston Mains and Aikengall farms, by kind permission of Mr John Hamilton and Family. Despite heavy rain in the days before the Open day we were lucky that it was a fine day ensuring a good turn out.

The day started with Opening speeches from Mr Jim McLaren from QMS and from host farmer John Hamilton. 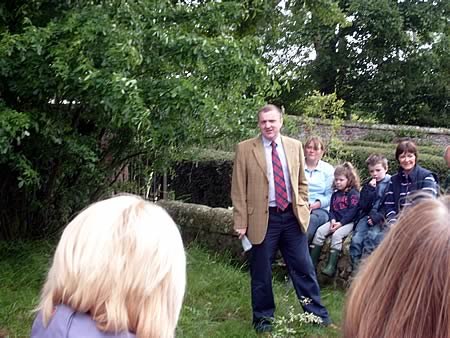 Following Tea and Cakes we headed up the hill to view the fine herd of Simmental x cows and calves.

On returning we headed into the sheds for lunch a fine BBQ, and a table overladen with cheesecakes and pavlovas to name just a few all prepared by Dorothy.

The expansion of a family farm to generate additional income is often driven by the desire to provide work for the younger generation, and Aikengall in Scotland is one such example.

John and Vanessa Hamilton, in partnership with their sons employ one full-time tractorman. Each son has a special responsibility, with James, 27, managing the large sheep flock, while 25-year-old Charles looks after the cattle. A third son, Harry, 20, has just returned from working in New Zealand.

The Hamiltons moved from Lanarkshire after buying the 768ha (1,900 acres) holding of Aikengall near Dunbar in East Lothian in 1998. They have since purchased a 161ha (400 acres) neighbouring farm Thurston Mains. Last year, they took on the tenancy of Nunraw at Garvald adding a further 485ha (1,200 acres), with all the land in organic production and ranging between 300-1,200 feet above sea level.

The suckler herd is made up of 350 Simmental cross cows, which are put to Beef Shorthorn or Lincoln Red bulls as heifers, followed by pedigree Simmental sires from their second calving onwards. As a result of the additional acreage, the herd is being increased to 400 head, which will be achieved by retaining more home bred heifer replacements.

All the progeny is finished on-farm and has been sold deadweight to Dovecote Park to supply Waitrose with organic beef for well over a decade. Bullocks are usually sold at 18-23 months, weighing around 380kgs deadweight. Any heifers which are not retained or sold for further breeding are sold at 18 months, weighing 330kg. The most recent price paid was £3.90/kg. The Simmental cross cattle from Aikengall have topped Dovecote Park’s Producer Performance Index for cattle which meet the required weight and grading specifications, whilst still achieving good weight for age on this low input system.

“The conversion payments were one of the attractions of organic farming, but the other incentive was the opportunity to add value to our products,” says Mr Hamilton. “I have always found Dovecote Park to be fair, and their payments haven’t fluctuated much, compared with some other buyers.”

The emphasis is on home-grown feed, with the growing cattle diet based on red clover silage, crimped barley and straw. Red clover leys play an important role; however they only tend to last four to five years, while the white clover mixtures remain productive for up to 12 years.

Mr Hamilton stresses that he is not intending to return to conventional production.

“I am not an organic zealot, but I have been surprised at how much I have learned about land management since converting to an organic system. Crossing chemical fertilisers off the list of inputs has saved a significant amount of money.”

A rigorous culling policy is applied to any cows which fall outside the tight spring calving pattern, with animals receiving a small premium for their organic status when they are sent for slaughter. The high price of yeld cows in recent months receiving up to £3.50kg,has also prompted the Hamilton’s to set a nine year age limit on cows. Heifers used to calve at three years, but the older group is now calved at two years, to speed up the expansion programme and increase productivity. By using Simmental bulls, they have a plentiful supply of quality replacements to implement such a rigorous culling policy to both improve and expand the herd, without compromising the herd. 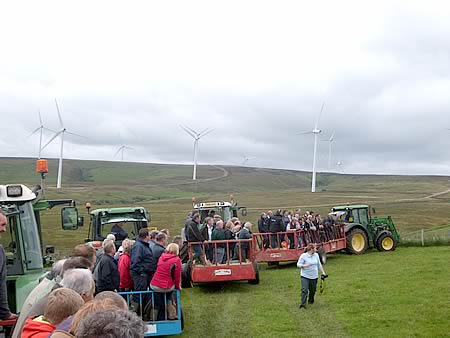 Bull selection is taken very seriously, “We will pay around 8,000gns for pedigree Simmental sires, and have recently decided to try and improve conception rates by using smaller female groups, with one bull to 30 cows,” he explains.

“We need cows which will put on condition over the summer, so they are cheaper to feed over the winter. This trait is particularly useful on an organic farm, because only 40% of the finishing diet can be made up of concentrates. Therefore, unlike many other breeders, my preference is for bulls with high EBVs for fat cover. Ease of calving is the only other figure that influences me; other than that I select by eye. I always pay particular heed to the accuracy of the EBVs”

Despite predicting a strong future for beef production, Mr Hamilton has some reservations.

“Prices have improved, but our costs have gone up at the same time. I am happy with the balance of enterprises, but it would be nice if suckler cows were more profitable. However their rise in value has turned them into an important financial asset for the farm, so that has to be taken into consideration.

Stock: 350 suckler cows,all Simmental cross in a closed herd, only buying in bulls.

Cows calve to Simmental bulls and heifers to Shorthorn or Lincoln Red at 3 years old.

Use all homebred replacements, preferably a Simmental x Lincoln red/Shorthorn type of cow.

Cows are all wintered outside on deferred grazing and kale, and are housed in February once house space is available for calving. 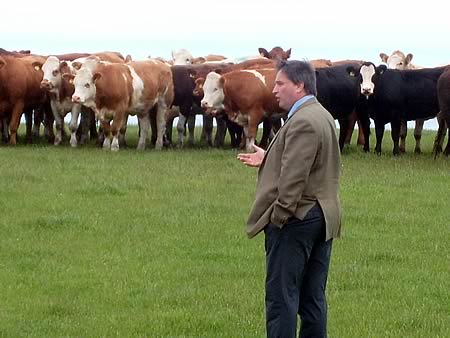 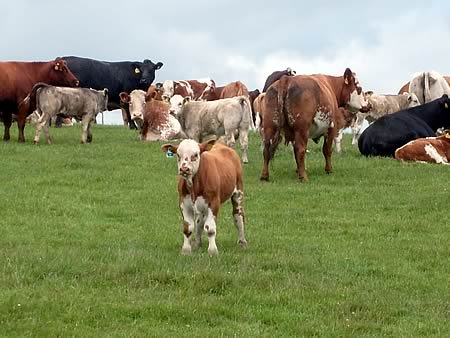 1800 ewes in a stratified system

250 Blackface ewes on hill which are kept pure.

The sheep flock is also run on a closed system only buying in Tups, and breeding own replacements. With surplus ewe lambs sold for breeding.

All wethers finished on farm.

Lambs are marketed through Welsh Country foods and Dunbia. 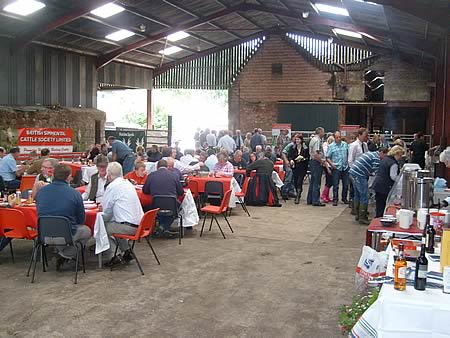 Finally a big thank you, to John Hamilton and family, all the Sponsors who helped make the event possible and to the Club Members who helped on the day.