Top price of the day came for the reserve junior champion, the March 2003 Woodhall Premier, from Hector MacAskill, Woodhall, Dunbar, and sold to Richard Rodgers, Portglenone, Co Antrim, for 13,000gns.

The junior champion, the May 2003 Skerrington Pinnacle, from John Young, Skerrington Mains, Kilmarnock, made 12,000gns. The buyer was Billy MacPherson, Blackford, Inverness. 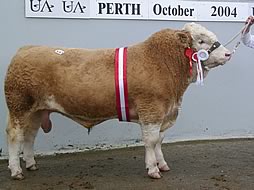 The supreme champion, the March Corskie Principal from Jim and Ian Green, Corskie, Fochabers, Moray, sold for 11,000gns. This beast joins the pedigree herd of Boddington Estates, near Cheltenham. The sire, Popes Laird, cost 12,000gns in February 2002 and has proved to be real breeder and an outstanding bargain. 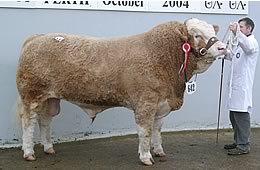 Another son of this bull from Corskie, a second prize winner, sold at 10,000gns to Adrian Ivory, Strathisla Farms, Meigle, Perth.

Billy MacPherson, of Blackford, has bred numerous fine bulls this year. He had a top of 7000gns selling to Forteviot Farms, Dupplin, Perth, where the bull will be run with commercial cows. 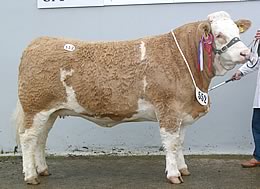