Pedigree bulls sold to a top price of 3,400gn at the spring show and sale at Thainstone Centre on Wednesday, March 2nd 2005.

The event was run by Aberdeen & Northern Marts as part of the 2005 Royal Northern Spring Show and was held under the auspices of the British Charolais, Limousin, Simmental and Aberdeen-Angus cattle societies. 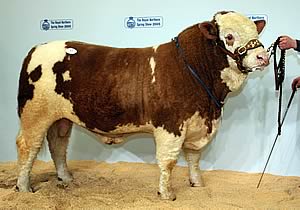