Ever since the development of the ‘barley beef’ system by Dr T.R Preston at the Rowettt Research Institute during the late 1950’s there has been an intensive beef system at Harper Adams. The beef unit rears Holstein and Continental cross Holstein bulls from the 400 head dairy unit and provides three resources.
Firstly the beef cattle are used for teaching purposes for students to monitor performance and learn how to select cattle for slaughter. Secondly to provide a research facility for ‘production focused’ experiments for final year BSc students and over the years we have evaluated numerous breeds, feeds and supplements. Thirdly to show ‘best practice and make a profit’. Thankfully we exceed ‘top 1/3rd’ performance targets but this is done with attention to detail with husbandry and management.

We have recently finished a batch of over 30 Simmental x Holstein bulls. 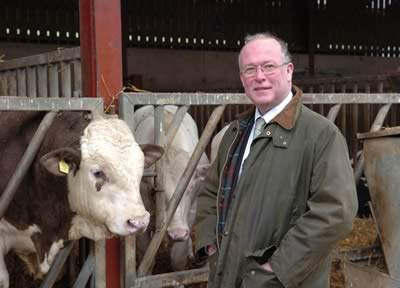 They recorded a DLWG from 3 months old of 1.48kg to slaughter weights of 591kg at 13.3 months old. They killed out at 55.3% with R grade carcasses weighing 327kg having consumed 2.28 tonnes of feed at an FCR of 4.74. This performance significantly exceeds the EBLEX targets for continental bulls and is some of the best performance we have achieved when compared to other continental breeds reared through the Harper Adams beef unit. I would comment that the Simmentals were bred from bulls with top 10% Terminal Indexes with positive Caving Ease Direct EBVs. 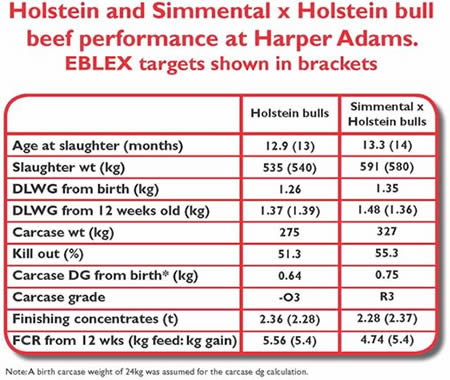 This is always the type of beef bull we use on our dairy herd, and is based on all of our research evaluating progeny from beef bulls with different Terminal Indexes.

The performance of the Simmentals is shown in the table below in comparison to the Holstein bulls reared alongside them. The Simmentals as we would expect produced significantly higher DLWGs, slaughter weights, grades and FCRs and were obviously so much ‘easier on the eye’ compared to the Holsteins!

The bulls were weighed at slaughter ‘gut full’ so therefore the killing out percentage appears relatively low. If they had been weighed ‘gut empty’ as per at market or in the abattoir then the killing out would be increased by approximately 2 percentage units.

In 2009/10 our cereal fed Simmental bulls recorded gross margins of £343 per bull which was very respectable. We are of course well aware of what has happened to cereal prices this last year which is going to put pressure on margins for intensive finishing systems but thankfully as I write this article (May 2011) finished beef prices are starting to rise and climb over £3.00/kg which is ‘good news’.