“Spoilt for choice,” the comment of a leading commercial suckler farmer, just about summed up the quality of the Simmental bulls at the first autumn show and sale held at Perth Bull Sales new home, United Auctions modern state of the art premises on the outskirts of Stirling.

As good an autumn show of bulls as has been seen for some time reached out to tempt commercial producers who responded with an emphatic vote of confidence in the breed, which saw the sale average increase by some £834 on the year for 92 bulls, 17 more than last year, while the female average jumped £172 for 30 sold. 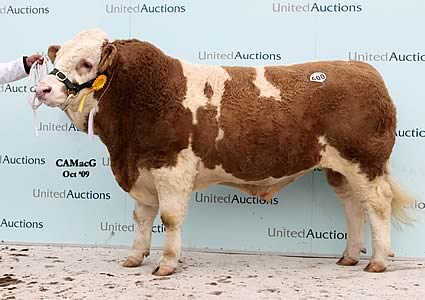 It was ironic though, that the sale topping price of 16,000 gns was reserved for the third last bull through the ring. Hockenhull Waterloo, sired by the 12,000 gns Blackford Harvester, provided a fitting finale for one of the breed’s “true gentlemen”, Hugo Arnold, Hockenhull Farms, Tarvin, Chester, to sign off with from the Autumn Perth Bull Sales. For a breeder, synonomous with quality cattle, who recently dispersed his prizewinning Hockenhull herd, it was the end of an illustrious career which deservedly ended on a high note. Waterloo, whose dam Hockenhull Girlie 13th, was the dam of several outstanding lots at that dispersal sale, sold to his sire’s breeder, Billy McPherson, Blackford Farm, Croy, Inverness. 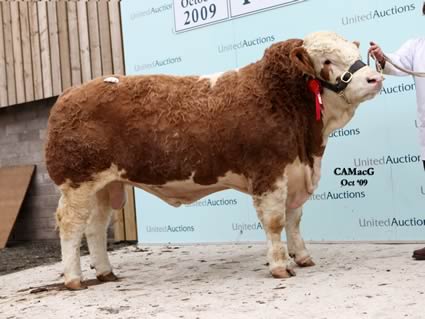 Iain Green, who has just been elected onto the British Simmental Cattle Society Council, as a Scottish Club representative and father, Jimmy, can be extremely satisfied with a fine day’s trading having secured the two lead prices in the female section as well as runner-up in bulls for their renowned Corskie herd at Garmouth, Fochabers. Hitting the heights in the bulls, was Corskie Woody, an April 2008 born son of the Irish sire, Celtic Rock, who sold for 12,000 gns to Pitgaveney Farms, Elgin. Earlier in the sale, Corskie Wham, a son of the herd’s stock bull, Ballinalare Farm Nightrider sold for 8500 gns selling to the Burytown pedigree herd of Mr and Mrs Fields, Blunsdon, Swindon. 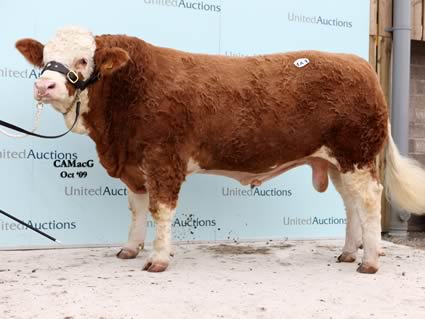 Grangewood William exhibited by Andrew and Yvonne Leedham, Swadlincote, near Derby, who secured the blue ribbons in the last intermediate class, attracted much attention in the salering selling at 11,000 gns to the Sacombe pedigree herd in Hertfordshire, owned by Paull, Judy and Bridget Borlase. This eyecatching son of Popes Laird who had won his class at the Royal Show in July, was bred from the homebred dam, Grangewood Sundial by Blackford Falcon. 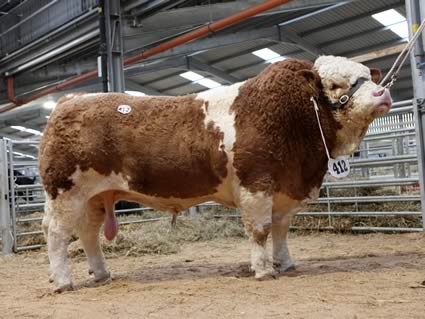 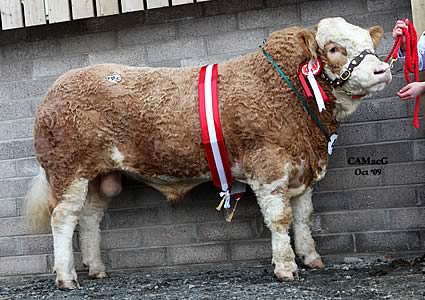 Omorga Watson, secured the final five figure sum, selling to Norman Innes, Findhorn, Forres. Having lifted the junior championship earlier in the day under the scrutiny of judge, Jimmy Wood, whose Popes Herd itself has lifted many top accolades in the show and sale ring up and down the country, Watson has an impressive pedigree legacy behind him. Being a full brother, to the jointly record priced Samson, stock bull at Strathisla, he is an embryo son bred from the highly successful mating of one of the most prolific brood cows in the breed, Cleenagh Daffodil and the widely acclaimed Irish bull, Raceview King, a combination which has proved unbeatable for his Omorga herd owners, Messrs. Harry and John Moore, Beragh, Co. Tyrone. 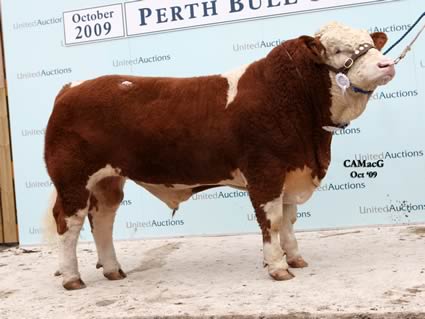 A cracker from the Broombrae herd of Gordon Clark, Auchtermuchty, Cupar, gave his owner a personal best price of 9,000 gns for the March 2008 born Broombrae Wayne. Sired by the herd’s stock bull, Woodhall Regent, a trait leader for 400 day growth, this big long red bull who was a third prizewinner in the pre-sale show sold north to A. Sime and Son, Bruceland, Elgin. Another by the Irish AI sire, Celtic Rock commanded 9,000 gns for Messrs J. and G. Houliston, Drem, North Berwick. Saltire Wallace whose dam is the homebred Saltire Pearl, is off for commercial work for J. Campbell, Bardnaclaven, Thurso. 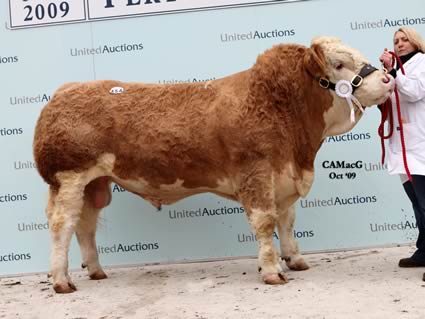 7,500 gns for the reserve intermediate champion, Braegarrie Wisdom gave Lindsay and Shona Currie and son, Robert, a best ever price when their Corskie Regal son sold to the Bruchag pedigree herd of Robert McAlister, Langalbuinach, Rothesay. 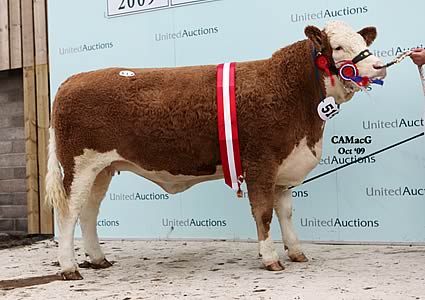 Two Ballinalare Farm Nightrider daughters, Corskie Vixen and Corskie Valerie commanded the lead prices in the female section, for the Corskie herd of Jimmy and Iain Green, Garmouth, Fochabers. At 4,500 gns each the two incalf heifers sold to D. Evans, Carraton and G. S. and G. I. Pettit, Main of Tannochy, Buckie, respectively. 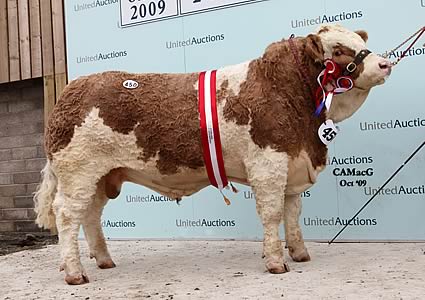 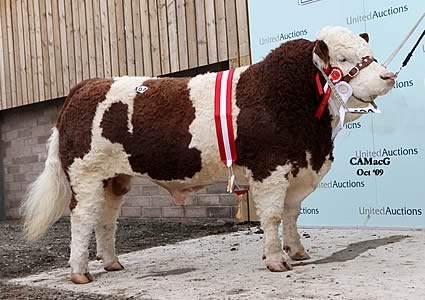