Commercial buyers drove the trade in what was a fantastic show of Simmental Bulls at Stirling, bulls were much sought after in the 4,000-7000gn price range. 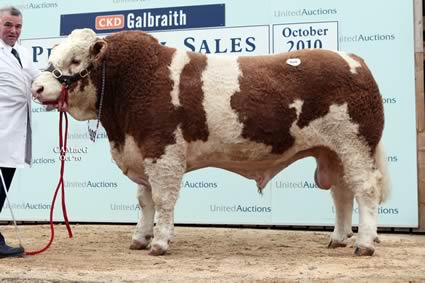 Topping the sale at 12,000gns was Senior Champion Starline Apollo with a TSI of +24 and SRI of +31, a January 2009 son and first offered for sale of 20,000gn Slievenagh Talisman the Reserve Overall Champion in October 2007 from Henry and Susan Widdicombe, Ashprington Court, Totnes, Devon, buyer was Mr J Jeffrey, Kersknowe, Kelso, Roxburghshire. 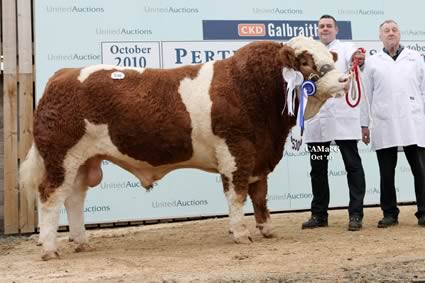 Next best, sold at 11,000gns was Reserve Overall and Reserve Junior Champion Drumacritten Arnold 09 with a TSI of +23 and a SRI of +27, a May 2009 son of Raceview King from Mr W. E. Nelson, Drumacritten, Rosslea, Co Fermanagh, this one went to the Dunbar family, Pitgaveny Farms, Elgin for their commercial suckler herd. 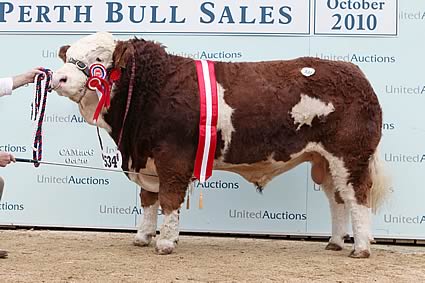 The Overall and Junior Champion Drumlone Anchor 09, a May 2009 son of Siegfried, a bloodline which is over 30 years old from Mr K C Veitch sold at 10,000gns to Mr W.E.Nelson, Drumacritten and Mr A Richardson, Cleenagh. Anchor has a TSI of +19 and SRI of +29. 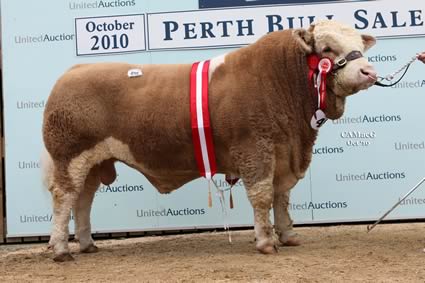 Intermediate Champion Drumsleed Ace 09, an April 2009 son of Hockenhull Matthew, with a milk figure of +7 and TRI of +28 and SRI of +36 from Gerald, Morag and Douglas Smith, Drumsleed, Fourdon, Laurencekirk, Kincardinehsire, realised 8,500gns and sold to Snaigow Farming, Hillocks of Clunie, Blairgowrie,Perthshire. 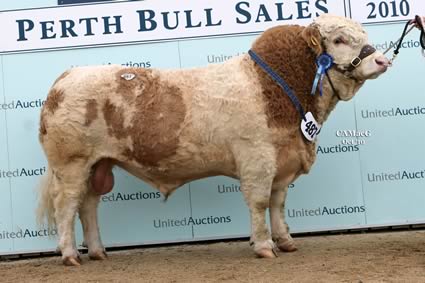 Next best sold at 8,000gns Delfur Avenger 09, with a TSI of +35 and a SRI of +40, an April 2009 son of Delfur Prime Cut form Delfur Farms, Dundurcas, Rothes, Aberlour , Banffshire, the buyer was Neil McGeoch, Hazelden Simmentals, Easter Blacklaw, Stewarton. 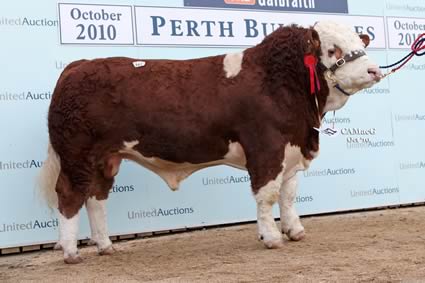 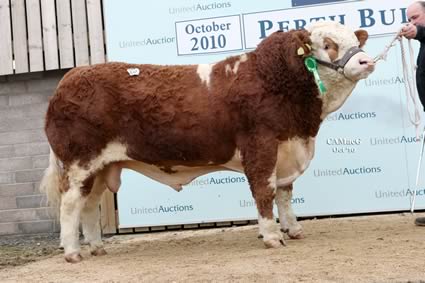 Michael Durno sold Auchorachan Archer by Clonagh Tiger Gallant for 7000gn, with a TSI of +21 and SRI of +21 he went to A.D. Sutherland, Connachie, Elgin.

Class 11, the 3rd class of junior bulls was the star class of the day packed with quality stock with 9 bulls selling to average over 6100gn. 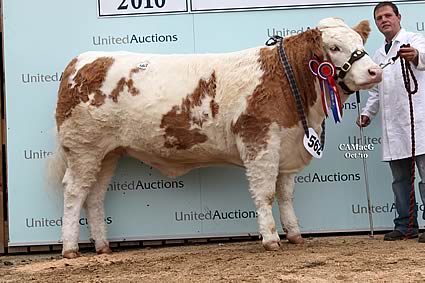 Of the 86 bulls sold, 92% remained in Scotland, 7% went to English buyers and 1% to Northern Ireland.