Commercial trade led to a tremendously high clearance of top quality bulls with 38 selling for over 5,000gns. The Simmental breed has the ability to cross with any other breed to produce top quality milky replacements and also have the terminal abilities and DLWG that can match any other breed. The driving of health within the breed gives our customers confidence in the animals led to the best October sale the breed has seen in recent times. 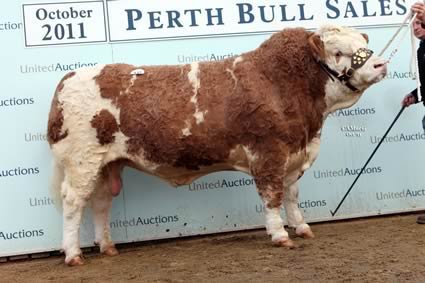 With a jam packed ringside the sale got off to a flying start with Jim & Patricia Goldie’s bull (Newbiemains) Newbiemains Apache by Woodhall Sympa with a TSI of +23 & SRI +25, he sold to D & P Cornthwaite, Lockerbie Dumfries. 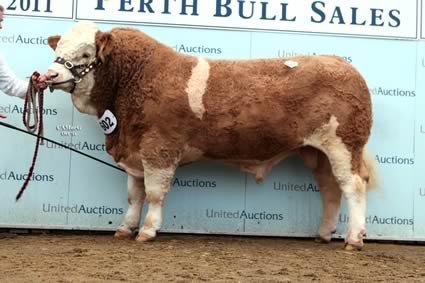 Topping the sale and equalling the breed record of 22,000gns was Dirnanean Bradley which also was 1st in his class, his TSI is +32 & SRI +37, he was by Halenook Vargner he sold to the Corskie Herd, Fochabers, Moray this is the second time the McGowan’s have sold to 22,000gns and of the three equal top price bulls sold, the McGowan’s have bred two of them. 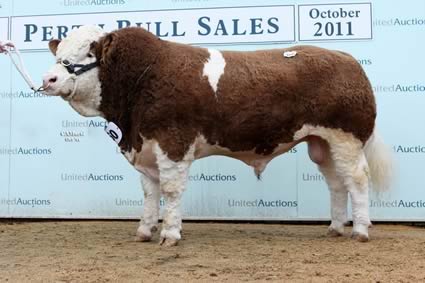 Next to sold at 16,000, selling from Mr W G MacPherson, he was 1st in his class and made Reserve Junior Champion Blackford Ben Mhor he was by Curlieu Knight and held a TSI of +23 and SRI of +27, he sold to Mr Richard McCulloch, Overhill House, Armadale, West Lothian, next best selling bull went to the Supreme Champion and Intermediate Champion Corrick Benson by Omorga Tarbuck and bred by Mr C McILwaine, he sold to Mr Brian Grant Druid Temple Farm, Inverness for 12,000gns he held a TSI of +29 and SRI of +32. 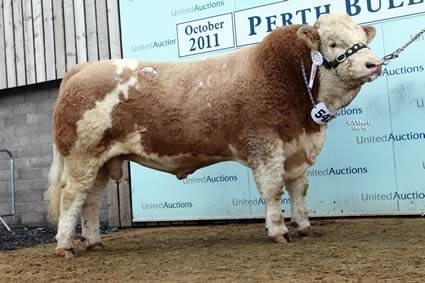 Boswell Bullet bred by Douglas Smith 10,000gns he was by Hockenhull Matthew and held a TSI of +32 and a SRI of +37 he sold to Mr T Coghill, Orkney. 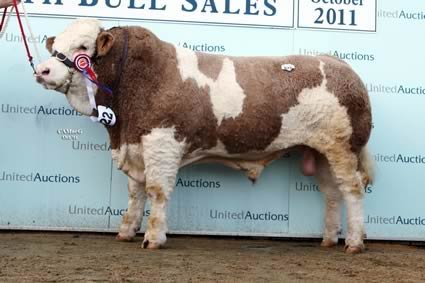 The next best price went to Woodhall Brandon he has a TSI of +29 & a SRI of +35 and was bred by Mr H Macaskill and was sold for 8,500 to Mr D Leslie, Redhill Farm, Mosstowie, Elgin. 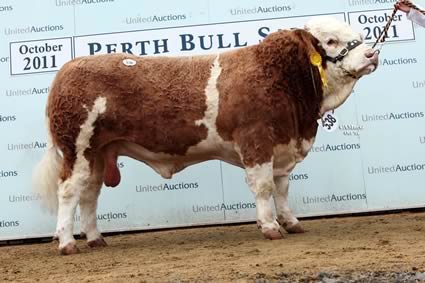 Next to sell was the Borlase bred bull Sacombe Balmoral he sold for 8,000gns with a TSI of +25 and SRI+30 he went to Ann & Tony Jukes, Swallowhill House, Sandhurst Kent, the next was sold at 7,800gns for the bull bred by Mr J Dykes Mendick Butch (picture to follow) which holds a TSI of +36 and an SRI of +46 and was by Omorga Volvo was purchased by Mr S R Hitchins of Boddington Estates, Burghbridge Bernard (picture to follow), Senior Champion was then sold at 7,500gns he was bred by Mr C J G Clarke and purchased by Mr W J Barclay, Ardiecow Farm, Fordyce, Banff.

Dirnanean Bali-Hi (picture to follow) realised 7,500gns he was bred by Mr F J A McGowan and was by Halenook Vargner he held a TRI of +32 and SRI of +42 he was purchased by Mr & Mrs B Wise, Hall Farm, Skipton on Swale, Thirsk.

Omorga Bermuda (picture to follow) also realised 7,500gns, he was by Omorga Volvo and held an TSI of +28 and a SRI of +36 bred by Mr John Moore was sold to Mr R H Gladstone, Thornhill, Dumfries. 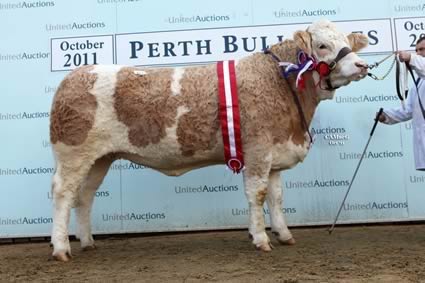 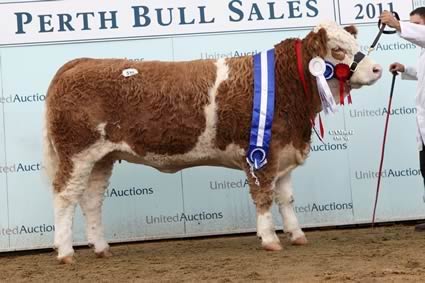 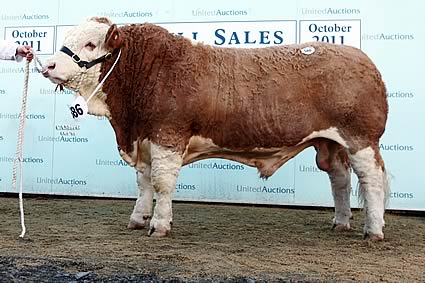