Commercial trade underpinned a strong demand for the better quality bulls in the Simmental sale ring at the Perth Spring Bull Sales on Monday 15th February 2010. A larger tail-end than usual meant that a higher percentage of bulls sold under the 3000 gns mark, which hasn’t been seen for some time, however the breed average continued to rise on the year by some 200 gns.

With an 88% clearance and 135 bulls sold through the ring to average 4,751 gns compared with a 4,544 gns average in 2009 for six less sold, breeders went home feeling satisfied with the prices achieved but with a warning ringing in their ears, “that only the best will do” – a sentiment which will never change – but will continually return to dampen the ego of even the best breeder!

For the best in the judging ring, proved the best in the sale ring – 20,000 gns for the Supreme Champion and again for the Intermediate – a glowing tribute in itself, if one was needed – to the “man in the middle” – Robert McAlister, owner of the Bruchag herd on the Isle of Bute. 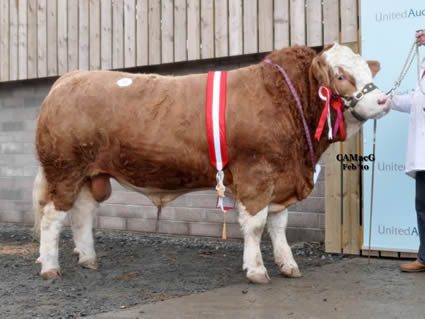 The first to fetch 20,000 gns was the Intermediate Champion, Blackford Worzel 2, from J. C. McLaren and Partners, who acquired a large portion of the long-established Blackford herd last Spring from Billy MacPherson, Blackford, Croy, Inverness, as foundation stock to establish a new herd. Bred from the Irish sire, Celtic Rock, who has recently been proving a point in the breeding stakes, producing some of the top prices at the autumn sale, and from the Curlieu Knight sired dam, Blackford Ragtime, Worzel 2, sold as a new herd sire to the Manor Park herd of D. C. Houldey, Lauder, Berwickshire. 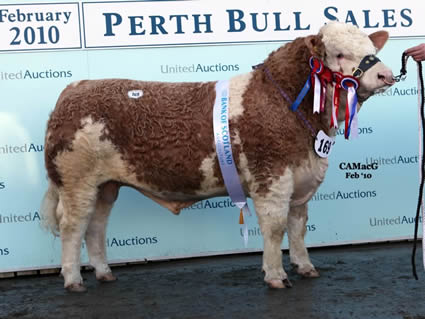 The Junior Champion, Auchorachan Wizard, put the icing on the cake for a memorable Bull Sales for D. & R. Durno and Sons, Glenlivet, when he was tapped out as Supreme Champion and going on to fetch 20,000 gns in the sale ring, when he sold to the Ballinalare Farm Herd in Northern Ireland, belonging to Joe Wilson and family. With his dam having been bred in the famous Ravensworth herd, Wizard was sired by the Brinkton Brilliant son, Saltire Talent. Following on from a highly successful beef event at Auchorachan last autumn, where the large turnout of commercial producers were extremely impressed by the excellent quality of the commercial suckler herd, this time it was the pedigree herd which took the plaudits. 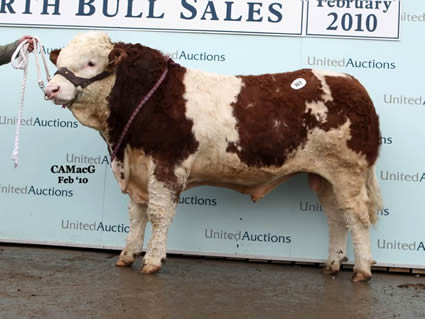 It certainly was a case of “keep it in the family” when Auchorachan lifted the joint second top price of the sale, 10,000 gns for the Clonagh Tiger Galant son, Auchorachan Winger. This 1st prize winner in class 10, whose dam Auchorachan Tara is a half sister to the day’s 20,000 gns champion, sold to Robert Macgregor, Kirkton of Mailler, Perth, as a new herd sire for the Team herd. Winger helped give the Durno family an impressive 11,000 gns average for their three bulls, when their third entry, the third prizewinning Auchorachan Whisky sold at 3200 gns. 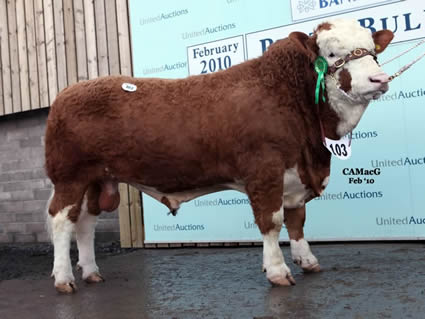 The final four figure price, again 10,000 gns was realised by Innerwick Winchester, a third prize winner in class 7 for Dorothy and Lindsay Moffat. Sired by the herd’s stock bull, Oakhill Ned onto the homebred Innerwick Natasha, Winchester had an impressive milk figure of +12. He sold to the Whiteknowes herd of W. J. Barclay. 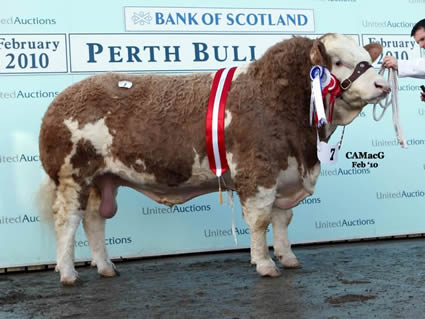 Four bulls were bid to 9,500 gns and the first of those through the ring was the Reserve Supreme and Senior Champion from the Banwy herd in Wales of R. E. Jones. This Camus Brandy son, Banwy Wonderboy, whose dam the Starline New Yorker sired Sexygirl, is off for pedigree breeding in the Popes Herd of Jimmy and Vicky Wood. 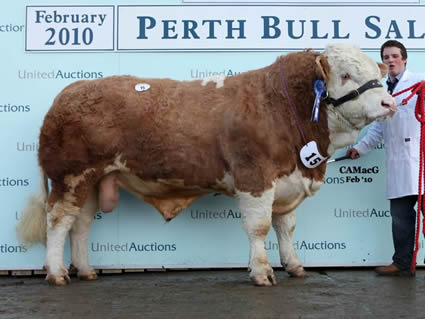 A handful of bulls later and it was the turn of the Denizes herd to get a piece of the top action when their second prize winning Dripsey Super King sired Warrior was bid to 9,500 gns. With a wealth of show winning breeding on the dam side, the Barlow family’s Denizes Warrior sold to Wm. Barnetson & Son, Wick, Caithness. 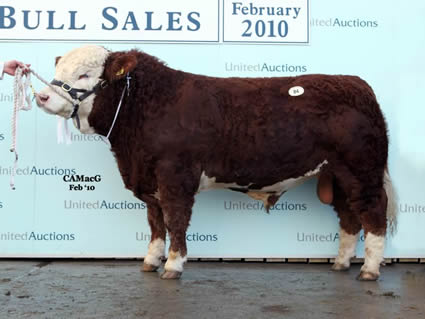 The best from W. H. Robson & Sons, the Reserve Intermediate Champion, Kilbride Farm Warren, full of home breeding on both sides, fetched 9,500 gns selling to A. Connolly, Moffat, Dumfriesshire. The final bull at this price was the second prizewinning Grangewood Wallace. This Gretna Supersonic son was forward from Andrew and Yvonne Leedham and sold to R. K. Bryce and Son, Stanley, Perth. 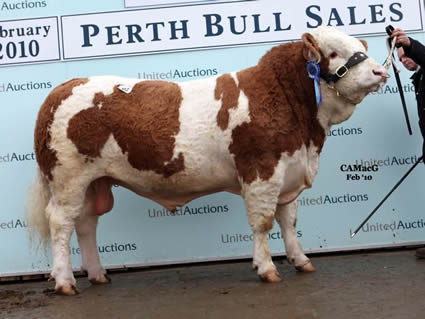 Getting a sale tag of 8,500 gns was the best from Jimmy and Iain Green’s Corskie herd at Fochabers, Moray. Corskie Wealth by the Ballinalare Farm Nightrider stock bull who has gave the herd many top priced lots over the past number of years sold to pedigree breeder, W. J. Hollingswood, Midhope herd, near Sheffield. The Dellfield herd of Brian Grant, Druid Temple Farm, Inverness, brought out the first sons of Stralongford Trojan, the 16,000 gns Supreme champion in October 2007 when purchased following Brian’s judging stint that day, as a new stock bull. His purchase gave the herd one of their best prices to date when Dellfield Warrior, sold for 8,500 gns to Stephen Allardyce, Aboyne, Aberdeenshire.

The Innerwick herd was in the money again, when their second prizewinning Innerwick Whisky 2nd by Hillcrest Butcher fetched 7,500 gns selling to the Campbell’s, Wick, Caithness.