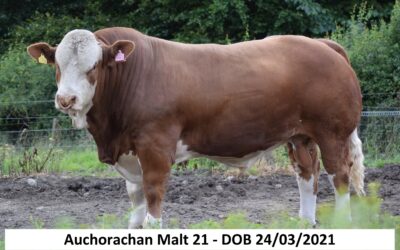 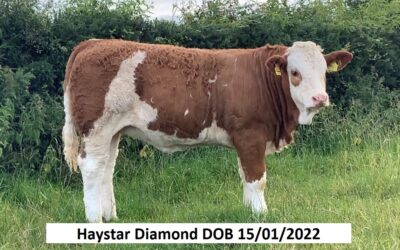 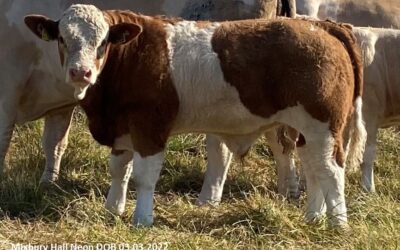 An outstanding show of cattle at the British Simmental Society sale, which included the Dispersal of the Shellthorn Herd on behalf of Andy & Dianne Grossey, attracted a packed sale ring at the Bristol Sales Centre on Saturday 12th May 2007.

The sale, run by the South West Simmental club in conjunction with McCartneys and Stags auctioneers, has become an important sale for the breed, with buyers coming from all over the UK. “The increase in closed herds for health reasons and the need for easy to handle and manage cattle has ensured an increased demand for the Simmental” said Fiona Sloan the Society’s Breed Development Manager.

The eagerly awaited Dispersal of the Shellthorn Herd, from Lower Sea Farm, Sea, Ilminster, Somerset, did not disappoint the expectant crowd, when the string off outstanding females entered the ring following a parade of the well known base cow Heywood Hannadante 28th. Red Hannah, as she is known at home, is now retired and will see her days out at Lower Sea with the Grossey Family. 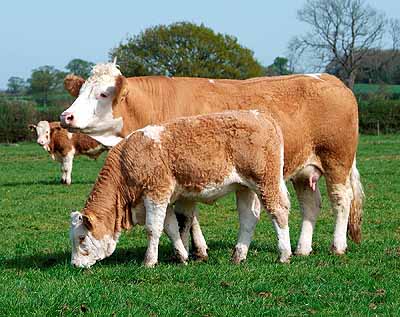 Highlight of the sale however was a Sterling Flint daughter, Shellthorn Hannadante 6th when a keen bidding war including two telephone bidders, saw her finally knocked down for 8,000gns to Messrs L.J. & A.J. Curry, Lowerdown Farm, West Lane, Felton, Somerset, to join their well known Winford Herd. A stylish young cow born in 2003, she already has an impressive show career behind her and sold with her heifer calf Hannadante 19th, a daughter of Quanrose Kellog. She had been immediately preceded by Shellthorn Hannadante 5th another Kellog daughter also with an outstanding heifer calf at foot, Hannadante 17th, this time by Starline Pompous from the Blackford Hawk line. Again from an outstanding show line, both she and her calf will no doubt bring further success to her new owner, Mr. Webster, Whittakers Barn Farm, Cracoe, Skipton, who paid 3,600gns for the privilege.

Two lots made 2,400gns. Firstly to David Watkins, Stormer Hall, Craven Arms, Shrops when he purchased yet another Kellog daughter, Shellthorne Katie 6th, with her outstanding bull calf Shellthorn Victorious at foot. Another Pompous calf with outstanding conformation, he looks like a great prospect for the future for his new owner.

Gerald and Morag Smith travelled from Drumsleed in Scotland to purchase Shellthorn Hannadante 9th also for 2,400gns. Yet another of the Kellog progeny this very smart heifer was sold in calf to stock sire Shellthorn Reflex who was later to sell for 2,000gns to Mr. Matthews, Woolcombe Farm, Sandy Way, South Molton, Devon.
Reflex had been chosen as a junior Stock sire for the proven cows in the herd and showed outstanding conformation and style. 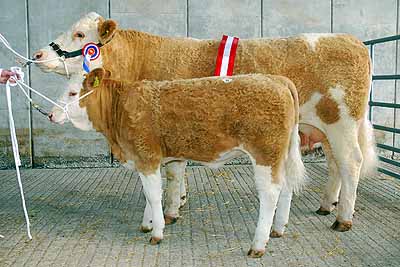 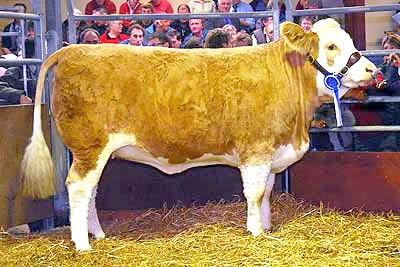 Following the judges recommendation, the Reserve Champion Female, Wishful Sunbeam from David & Christine Mills , Wishful Farm, Ruggin Road, West Buckland, Wellington, Somerset, sold to the second top price of 2,500gns when she was purchased by Pencarrow Farms, Camelford, Cornwall. This March 2005 daughter of Brinkton Bonzo had been shown successfully as a yearling in 2006 gaining 8 first prizes in her first year.

Joey Peter’s, 3rd Prize Brooklyn Bluebelle’s Lydia, from his Treetops Herd at Durley Hall Farm, Durley, Southampton, bred by Lynda Burditt, and sired by Woodhall Dynamite was sold for 1,800gns, when she changed hands to Mr. G. Doyle, Higher Fisherton Farm, Atherington, Umberleigh, Devon. She was sold in calf to Glenturk Rolex, who was purchased at Perth in 2005 for £17,000. 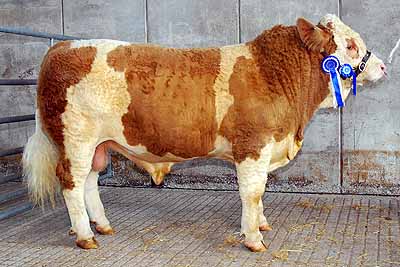 The trade for bulls was selective with quality bulls selling well. The January 2006 born Tilbrook Turpin from Peter Burgess, Tilbrook Farm, Lower Boddington, Daventry, Northants, was Reserve Male Champion in the pre sale show and sold to Andrew & Yvonne Leedham, Gunby Lea Farm, Netherseal, Swadlincote, Derbyshire, for 3,100gns to join their Grangewood Herd. Turpin is a son of Starline Klassik and out of Swallowhill Jessica by Brinkton Sovreign.