The Simmental Society Sale held at Carlisle on Friday 10th November 2006, in association with Harrison & Hetherington, saw an increase of £158 on the year’s average to £1575 for 5 more bulls sold. Traditionally a smaller sale than that in the spring, there were limited numbers of buyers for the increased number forward. Top end bulls sold well as did the females, who’s average also increased to £939 for six more sold, an increase of £90. 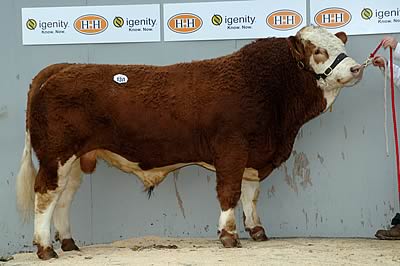 Top price of the day of 2,600gns went to Steven White from Clotton, Tarporley, Cheshire for the 16 month old Tirley Sherlock, a son of Hockenhull Punch and out of a Solway dam. He took a short trip up the motorway to join J. H. Strawhorn & Son at Dalmakether, Lockerbie. Mrs E Owen, Bradley, Bilston, West Midlands took the second top price when her first prize senior bull from the pre sale show, judged by John Morton, Floshend Cottage, Gretna, made 2000gns to Messrs T. & M Cannon, Little Torhouse, Wigtown, Newton Stewart. The first bull in the ring, Regency Rumplestiltskin is a son of Shebdon Lieutenant and out of Ronbren Bal-Nina. 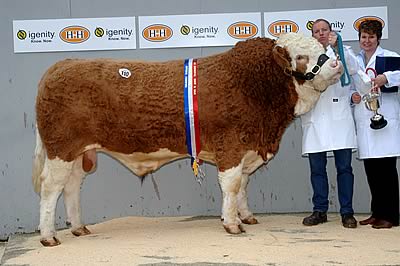 The Supreme Champion from the earlier show came from N. & N. Gwynne, who were rewarded for their long 9 hour drive from Rhos-Ddu, Crymych, Pembrokeshire when Chestermann Siegfried, a son of their home bred stock bull Chestermann Hale Bopp also went to Newton Stewart, this time to Messrs McDowall & Co, Culquhasen Glenluce and again for 2000gns.

The bull standing second in his class to the Champion, also went on to take the Reserve Supreme ticket for RJS & DM Addison, Keld Farm, Kings Meaburn, Penrith. Lartington Senator, made 1,800gns, when he was sold to R. M. Johnston, High Fotherley, Riding Mill, Northumberland.