The increasing demand for the breed continued ensuring a 100% clearance of the 18 bulls forward and showing a healthy average of £1844.79. 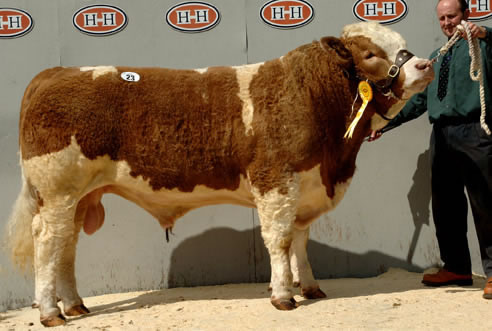 Chairman of the Simmental Young Members, Rob Fitton, of Moss Hall Farm, Lostock, Bolton, realised the next highest price for Simply Rudolph, by Slievenagh Fantastic son which made 2,800gns to The Woolhanger Farms partnership, from Parracombe, Devon, where he joined their earlier purchase of Blackpool Ross for 1,600gns from the judge Ron Loftus’s Blackpool Herd from Kirkham, Lancs for the long journey home. 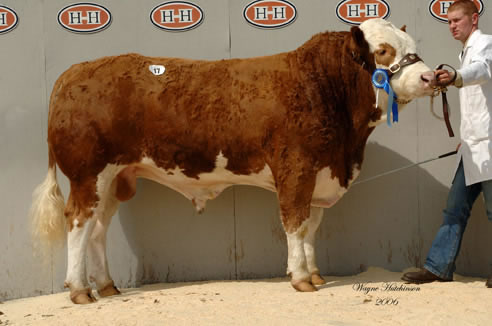 The Supreme Champion for the Day, Holstead Lydia, from Messrs F & J. Andrews, Holt Farm, Holmfirth, N. Yorks led a good show of females to an average of  £1064.79. 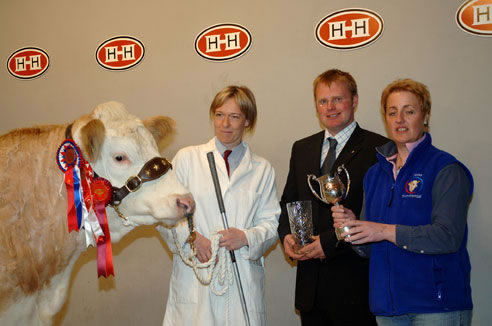 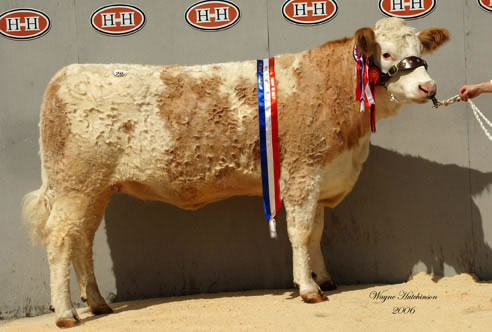 This outstanding heifer was sold in calf to Omorga Prince who sold at Perth in April 2005 or £15,000.  She sold to G.G. Perratt, Hole House Farm, Irvine, Ayrshire for 2000gns. Messrs Henry, Knockallan Farm, Castle Douglas paid 1500gns twice for the first of their 4 purchases.  Firstly for Annick Princess the 1st prize Senior Maiden Heifer from L.D.Quarm, Holehouse Farm, Irvine, followed by Midhope Ruby  from a draft sale of heifers from W.J.Hollingsworth , Midhopestones, Sheffield. These were joined by Midhope Radar  at  1350gns and Midhope Rowena at 1050gns, Hunsonby Charolais Ltd Townfoot Hunsonby, Penrith added Holtstead Amy to their herd from Messrs Andrews for 1400gns.

The draft sale of heifers from the Blakewell Herd from Messrs Steele Easington, Hull topped at 1000gns to A.H.Gamble, Little Fithie, Farnwell, Brechin.