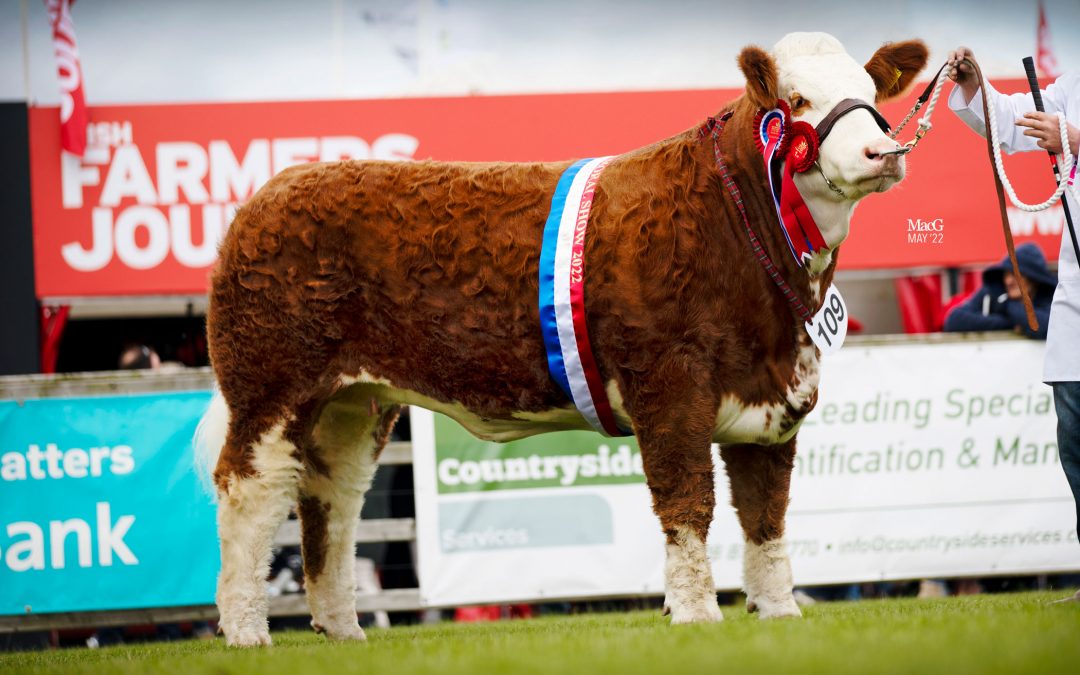 Mr Lowry who runs the 65-cow Keeldrum Herd based at Lanark in Scotland, returned to home soil to judge the Simmental entry at the four-day show. Originally from County Down, the former auctioneer has been living in Scotland for 22 years.

He was a regular exhibitor at Balmoral’s King’s Hall site, and won the male championship in 1996 with stock bull Carrigeen Farm Dandy, winner of the NI Simmental Male of the Year title in 1996 and 1997.

“There was a small turnout of Simmentals at Balmoral, but the quality was excellent. The females were exceptionally good, and on the day dominated the bulls,” explained David Lowry, who judged the Balmoral sheep interbreed pair and group championships in 2015.

Catching David Lowry’s eye to secure the female and supreme overall championship plaudits was the September 2020 heifer Ashland Topaz Lopez bred by Pat Kelly, and son Frank, from Tempo, County Fermanagh. Sired by the 14,000gns Saltire Impressive, she is bred from the Ashland Brandy daughter, Ashland Topaz 2nd – one of ten cows in the herd.

This much-admired heifer won the Simmental senior championship at the inaugural Four Breeds Calf Show, held at Dungannon last November. This was the Ashland herd’s second supreme Balmoral title, having won the award in 2007 with the home-bred Ashland Lady Diamond 3rd.

David Lowry commented: “The champion is a very stylish and powerful heifer, with tremendous length. She oozes style and ring presence, is full of breed character, and displays great locomotion. A worthy winner!”

Runner-up was the reserve female champion Ranfurly Stella 12th from David and Jonny Hazelton’s 20-cow herd in Dungannon. Born in October 2020 she is by Whitemire King Kong, and bred from the Hillcrest Champion daughter Raceview Fancy Winty – purchased at Roscommon in 2016 for 4,600 Euros.

This heifer is a maternal sister to the 9,000gns Ranfurly Jackpot, sold at Stirling in February 2020.

“The reserve champion is another classy and stylish heifer, with great length and good locomotion,” added the judge.

Brothers Shane and Paul McDonald from Tempo won the junior championship award with the January 2021 Ashland Topaz Mair. Purchased privately from Pat and Frank Kelly last autumn, this heifer was sired by Saltire Impressive, and bred from the Whitemire King Kong daughter Ashland Topaz 3rd – a maternal sister to the dam of the supreme champion.

Claiming the male and reserve junior championship honours was the March 2021 bull Craigy Max bred by William, Jane, Jamie and Lewis Dodd from Saintfield. Sired by Longbeach Darius, his dam Ranfurly Kleeb 35th was purchased at the Ranfurly herd’s second production sale in 2016, and is one of 12 pedigree cows in the Craigy Herd.

David Lowry added: “This junior bull is a fine example of the breed, and has a level topline, great width throughout, and good locomotion.”

The reserve male championship went to Ballinalare Farm Mack, an eleven-month-old bull bred by Joe and Alan Wilson, Rathfriland. He was sired by the herd’s 8,200 Euros stock bull Rabawn Ernie, champion at the Irish society’s 2014 sale in Tullamore. His dam Ballinalare Farm Helena 2nd , is an Auchorachan Wizard daughter out of Glenturk Tulip, a heifer won by Joe Wilson in a charity raffle.

Joe and Alan Wilson also won the award for the best pair of Simmentals. The winning duo were Ballinalare Farm Ladybird and Ballinalare Farm Lizabel, described by the judge as well balanced and matching heifers. They are both daughters of the 10,000gns herd sire Denizes Fantastic – reserve junior champion at Stirling in February 2016.

Results from the judging ring….