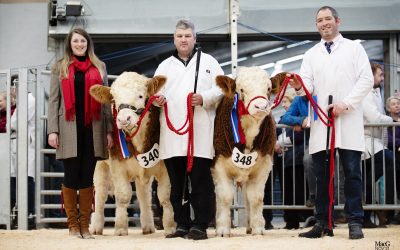 A level show of quality bulls at Perth, resulted in one of the best sales of Simmental Cattle for many years. The demand for quality commercial cattle meant that 80% of the 117 bulls forward found new homes through the ring with more sold privately later. The breed average increased by £855 on the year for 15 more sold to level at £3944 for 93. 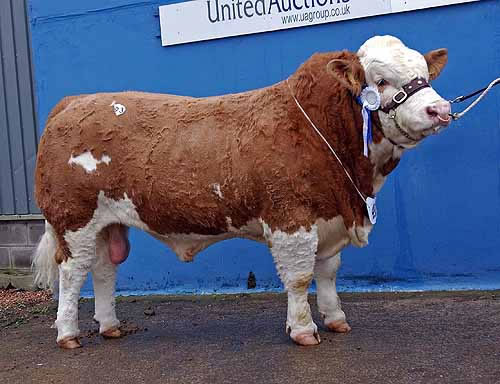 The top price of the day was 10,000gns and realised twice. The first of these was Finlay McGowan’s, Dirnanean Salvador, from Incheoch Farms, Alyth, who sold to Rory Bell, Roxburgh Mill, Kelso. Salvador is a March 2005 bull by Starline Nelson, a son of Starline Klassik out of a Dirnanean cow by Arkmill Franklyn and had been placed 2nd in his class in the pre sale show. 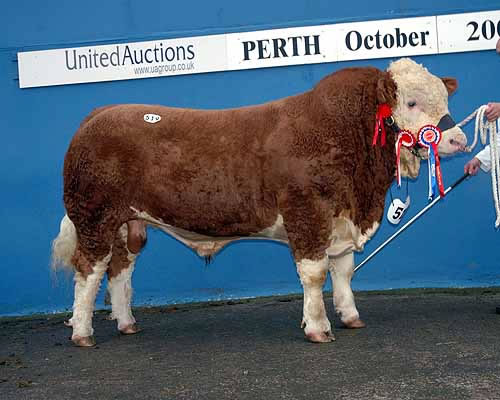 The second 10,000gns bid of the day came in a joint purchase by Delfur Farms, Rothes, Aberlour and W.G. McPherson, Blackford, Croy, Inverness, when they purchased Kilbride Farm Strabane, from W H Robson & Sons, Doagh, Ballyclare, Northern Ireland. Strabane was Judge, David Lowry’s pre sale Intermediate and Overall Champion and a part of the winning Group of Three. He is by Kilbride Farm Newry a son of Dovefields Gallant.

Another prize winner from the earlier show, this time the Reserve Intermediate Champion from Colin Fordyce, Islabank Farm, Meigle, changed hands to Messrs W.A.Galloway & Son, Culnoag, Sorbie, Newton Stewart for 9,500gns. This bull had previously been Junior Male Champion at this year’s Highland Show and Reserve Overall Champion at Alyth, his only two outings prior to the sale. He is by the Strathisla stock bull Blackford Lionheart and out of a Milnafua cow.

A bid of 8,500gns secured the next stock bull for the Blackpool Herd of Messrs J. D. & A. Loftus, Lodge Farm Thistleton, Kirkham, when they purchased Dirnanean Shane another son of Starline Nelson from Finlay & Neil McGowan. The dam of this bull is bred from top maternal lines in both Austria and Canada and is currently 15 years old. 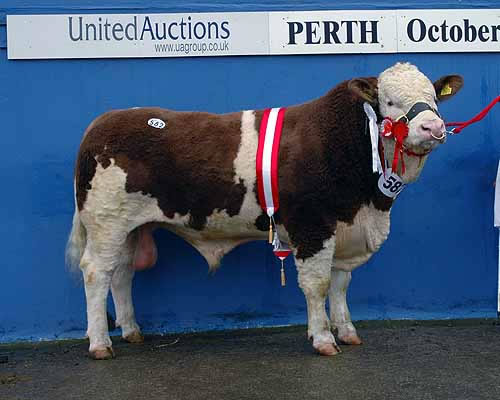 Joe Wilson, Martins Lane, Newry Co. Down, also sold Ballinlare Farm Spartacus for 8,500gns to John Hamilton, Aikengall, Innerwick, Dunbar. Spartacus had previously been awarded the Junior Championship before being placed Reserve Overall. He is by Innerwick Krackerjack and out Seepa Kay by Hillcrest Butcher.

The third member of the reserve group from Dirnanean held a good average for the McGowan family when Dirnanean Soloman sold to Hugo Arnold’s, Hockenhull Herd from Cheshire for 8000gns. Another son of Starline Nelson, he again followed the Judge’s recommendation when he was awarded the Reserve Senior title at the pre sale show. A further two bulls also secured 8000gns bids. Firstly, the winning group of three from W. H. Robson & Son, when Kilbride Farm Scarva, also by Kilbride Farm Newry, sold to Stewart Farms, Balglass, Lennoxtown, Glasgow.

Gethan Lloyd’s long trip from Glanrhyd, Carmarthen proved well worth while when his Junior bull, Crugmelyn Shamrock. which had previously been the Junior Champion at the Royal Welsh in 2006, sold for 8000gns to Mr. D. Smith, Sunnyhill View, Sandscross, Turriff. He is a son of Raceview King and out of a homebred Crugmelyn cow by Wroxall Extreme.

Female Sale Report
A packed ringside at Perth saw the female averages for Simmental females rise by £500 on the year for more animals sold. 40 of the 45 lots forward found new homes to average £2138 with a clearance of 90%.

Top price of the day went to one of an outstanding draft from Hector Macaskill’s Woodhall Herd which grossed £29,925 for the 8 heifers sold. Woodhall Raylee, a daughter of Woodhall Nutcraker, changed hands at £6300 to Joe Wilson, 4 Martins Lane, Newry, Northern Ireland one of 3 lots he purchased from the draft. Woodhall Raylynn by Corrick Nebraska a son of the famous Corrick Kentucky Kid and in calf to Ballinlare Farm Rival, bred by the purchaser and joint top price at Perth of !0,000gns in February 2005 when he was purchased jointly by Hector Macaskill and Lindsay & Dorothy Moffat, Innerwick, Dunbar. She was purchased for £5250 followed by Woodhall Rilee at £3780 and Woodhall Rosebud at £2100.

The second top price of the day also came from the Woodhall Draft when Woodhall Ronli sold to Messrs Horrell, Podehole, Peterborough. A daughter of Mackney Hector, she was again sold in calf to Ballinlare Farm Rival. 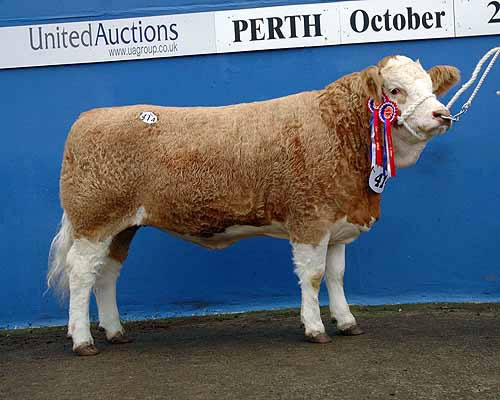 The pre sale Champion Blackford Rhiannon, by Kilbride Farm Millar from Billy & Anne McPherson’s Blackford Herd, sold to Mr. B. Jones, Cefn-Isa, Dolwen, Abergele for £3990. Another from the Blackford Herd and by the same sire was Blackford Ruby, sold to Colin Inglis, Dalachy, Aberdour for £4935. Ruby is out of Blackford Flame the dam of Blackford Northern Light who was sold for 15,000gns in February 2004. 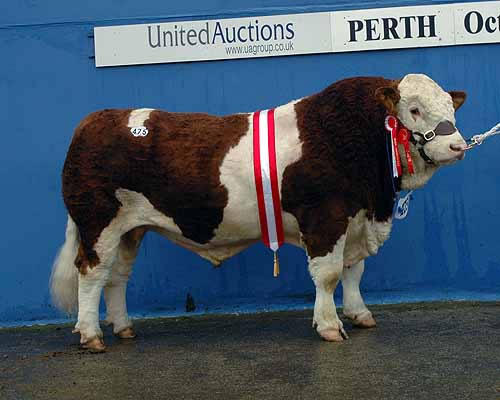 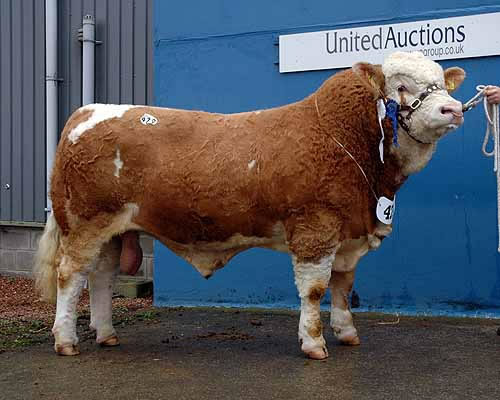 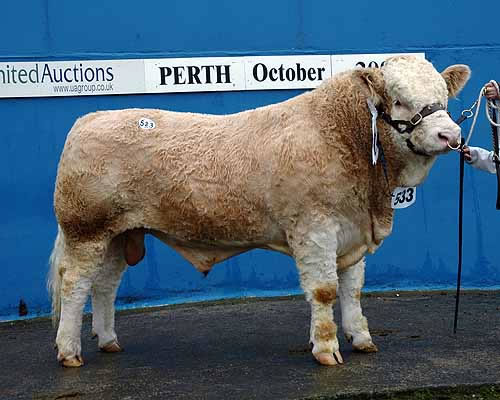 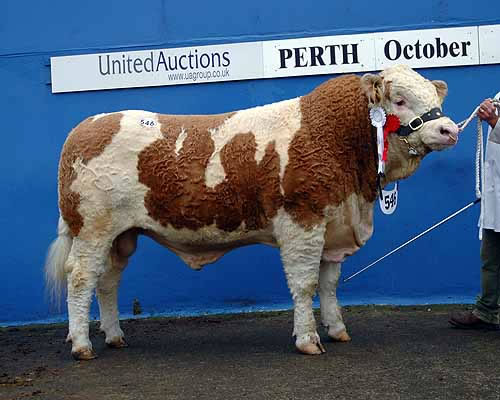