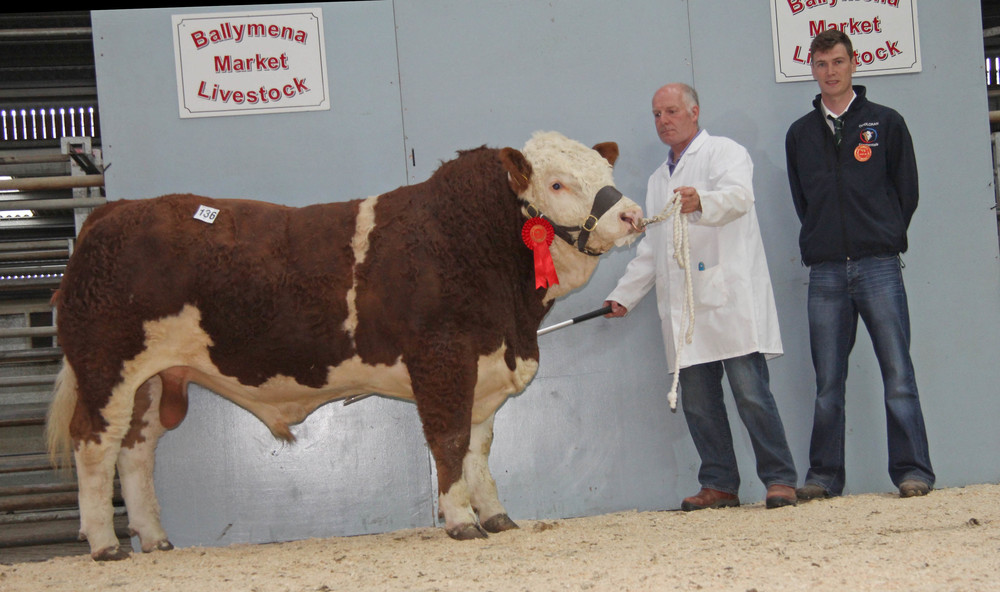 Bulls reached a ceiling of 3,000gns, while heifers sold to a top of 2,700gns, at the NI Simmental Club’s evening show and sale in Ballymena Mart.

Sale leader at 3,000gns was the first prize winning Kilbride Farm Gleno TSI+60 SRI+67, a polled entry from the Robson family – Billy, Michael and Norman, Doagh, Ballyclare. Sired by Danish-bred stock bull Sneumgaard Imperator, this fourteen-month-old bull was bred from the Crugmelyn Brenin daughter Kilbride Farm Eunice 151D. He is the breed’s top 5% for calving ease +6.2, and eye muscle area +4.6, and was snapped up by suckler herd owner Owen Miskelly from Ballynahinch, County Down.

Next best at 2,800gns was the second placed Stralongford Governor TSI+81 and SRI+ 89 bred by James Hanna, Trillick, County Tyrone. Born in February 2015, he was sired by the Raceview King son Ashland Brandy, and is out of a home-bred dam by Omorga Murray. In the breed’s top 10% for milk +9, and top 25% for calving ease +2.1, he caught the eye of Ballymena beef producer Kevin MacAuley.

Claiming the male and supreme overall championship ribbons was Ranfurly Fendt TSI+64 and SRI+65 from David and Jonny Hazelton’s Dungannon-based herd. This eighteen-month-old bull was sired by Omorga Murray, and is bred from the Carnkern Titan daughter Ranfurly Lady Diana 6th. He came under the hammer at 2,700gns, selling to Owen Miskelly.

Judge Paul McDonald, Tempo, awarded the reserve male and reserve supreme championships to Lisglass Geraldo TSI+53 SRI+57, bred by Leslie and Christopher Weatherup, Ballyclare. Born in February 2015, he was sired by stock bull Dermotstown Delboy – Balmoral champion in 2014 and 2015. His dam is the Omorga Prince daughter Lisglass Venus. This one attracted a bid of 2,400gns from suckler herd owner Francis Watson, Cloughey, Co Down.

Leading the female line-up at 2,700gns was the female champion Cleenagh Gem TSI+65 SRI+75 consigned by Adrian Richardson, Maguiresbridge. This yearling heifer was sired by the 10,000gns Drumlone Anchor, and is bred from the Raceview King daughter Cleenagh Tipsy. She joins Wesley Abraham’s Magheracrigan Herd based at Irvinestown, Co Fermanagh.

Duncan McDowell, Newtownards, claimed the reserve female championship with Castlemount Angela 2 TSI+75 SRI+79. Born in December 2014, she was sired by former stock bull Slievenagh Bonjovi, and is out of a dam by the 12,000gns Dovefields Gallant. Buyer at 1,700gns was Philip Robb from Ballynahinch.

Trade for Simmental bulls was selective, with buyers bidding on a budget. Auctioneer Graham Loughrey confirmed that 15 bulls sold to level at £2,226; while 10 pedigree females averaged £1,628 per head.

The NI Simmental Club is indebted to its sponsors, Mike Frazer from the Edenvale Simmental Herd, and Connon General Merchants.

Results from the Judging Ring… 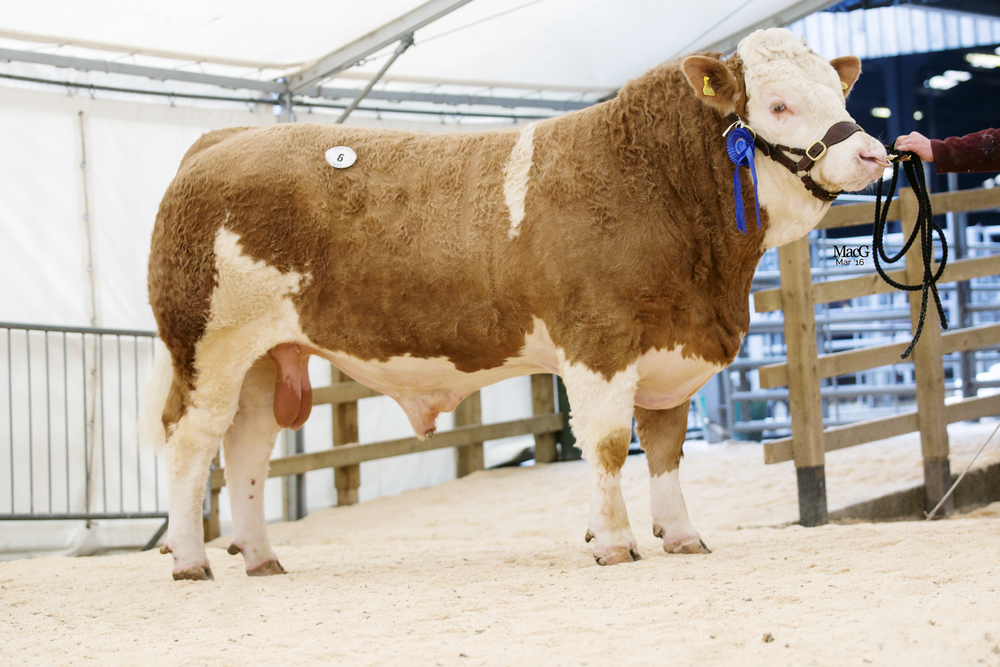 Next, at 3800gns was the Reserve Overall & Male Champion Grangewood Fortune 14, an Omorga Alonso son out of a Camus Brandy dam, bred by Mr & Mrs AS & YA Leedham, Gunby Lea Farm, Grangewood, Netherseal, Swadlincote, Derbyshire, DE12 8BE. 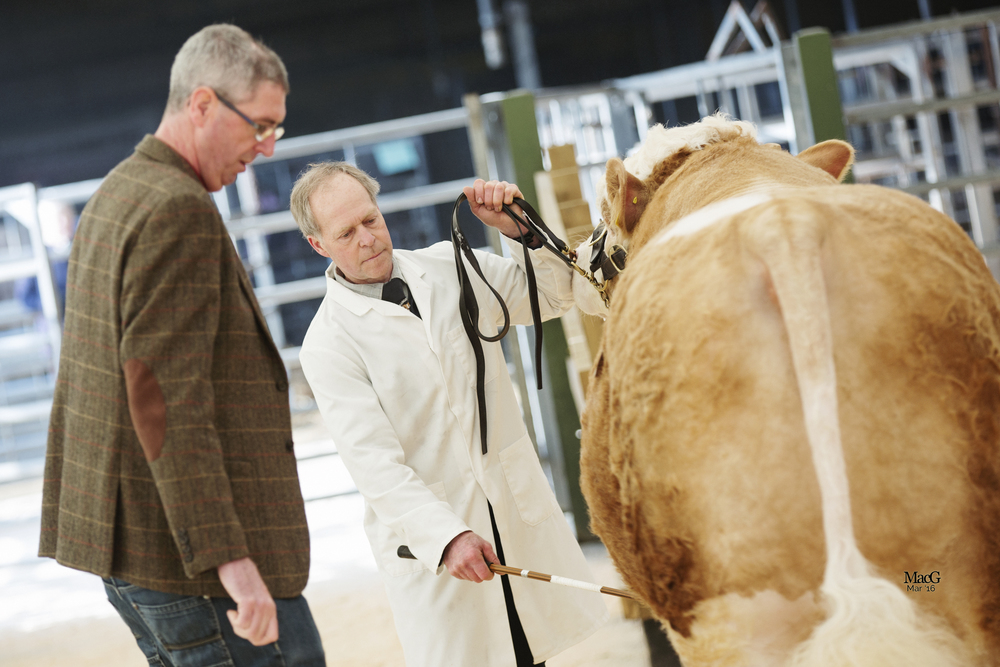 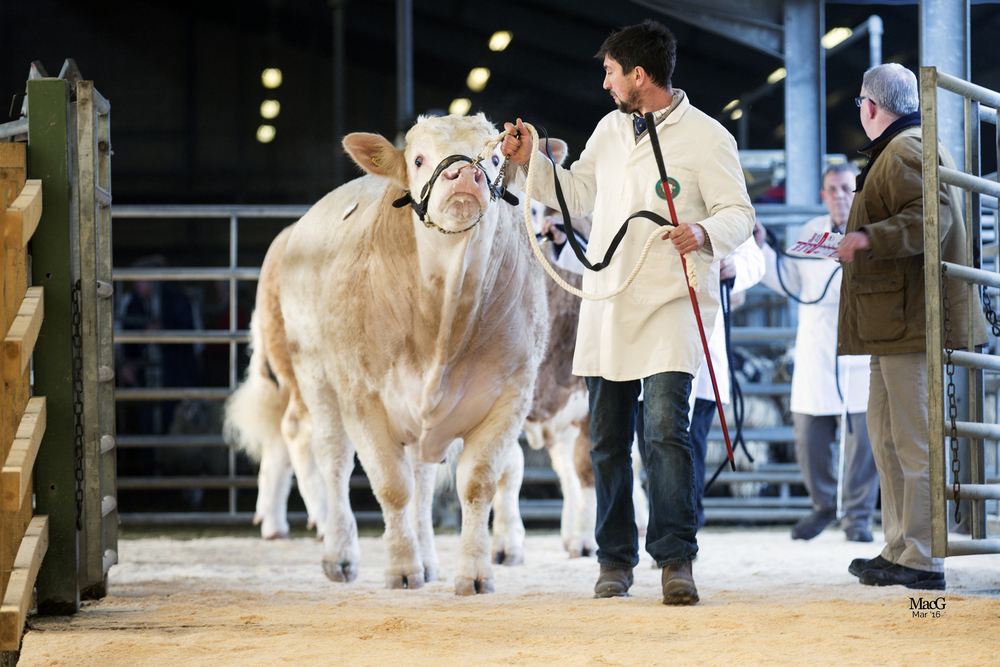 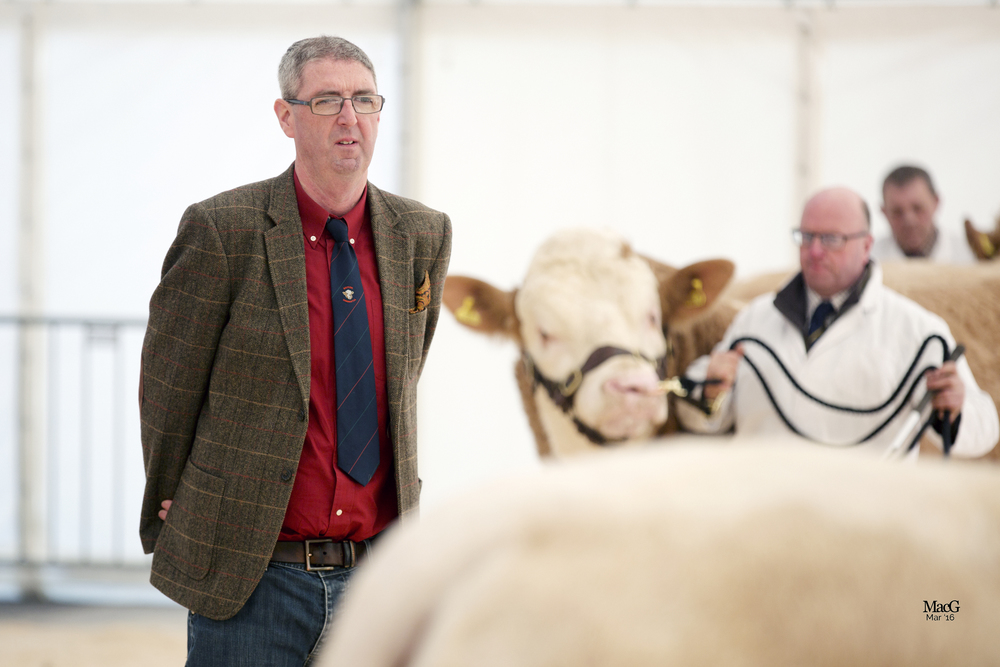 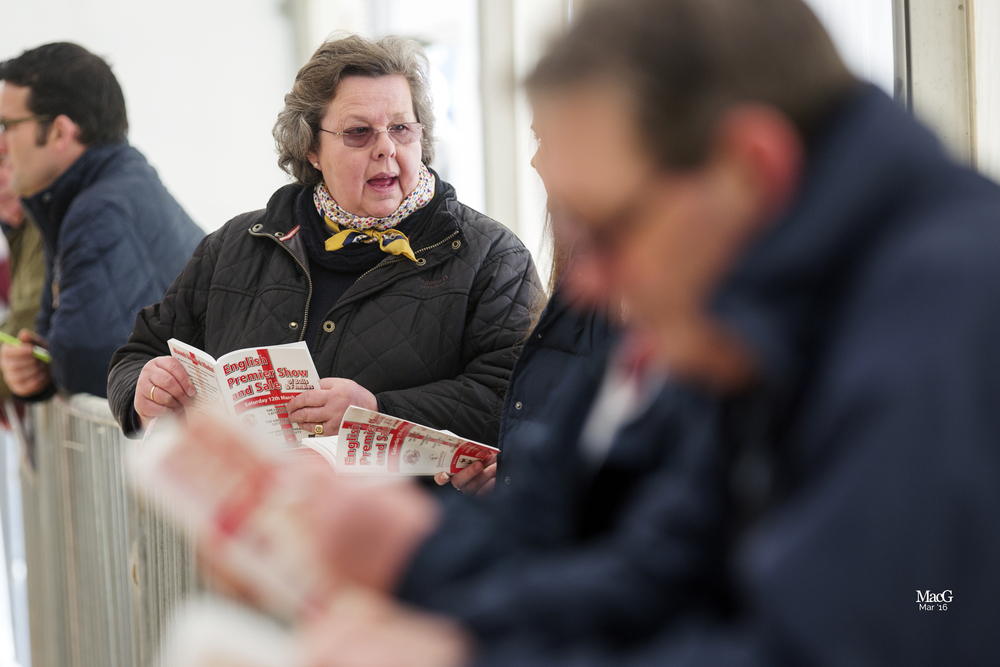 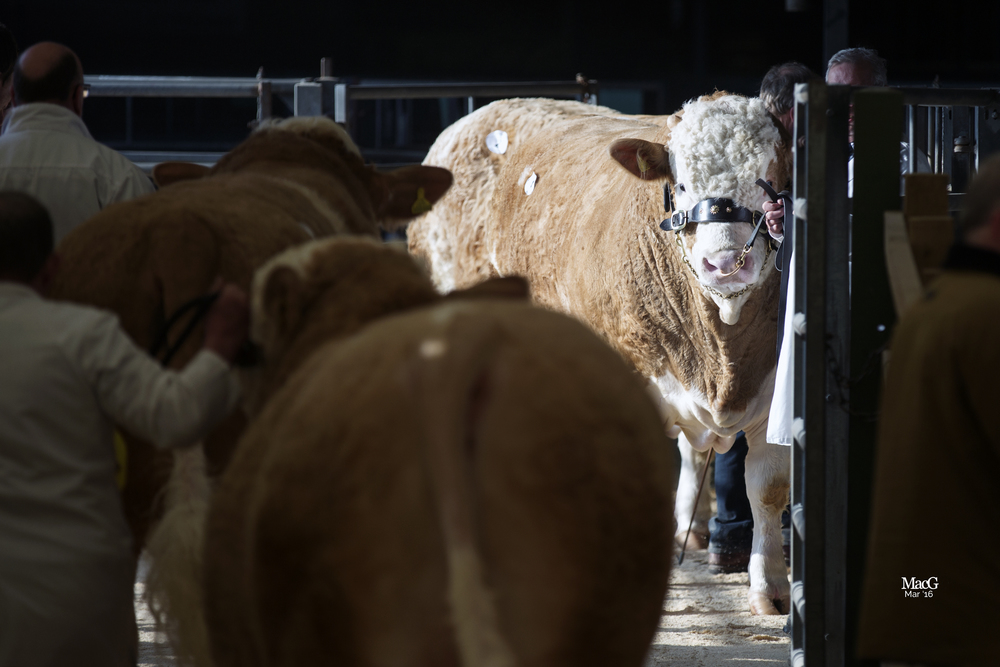 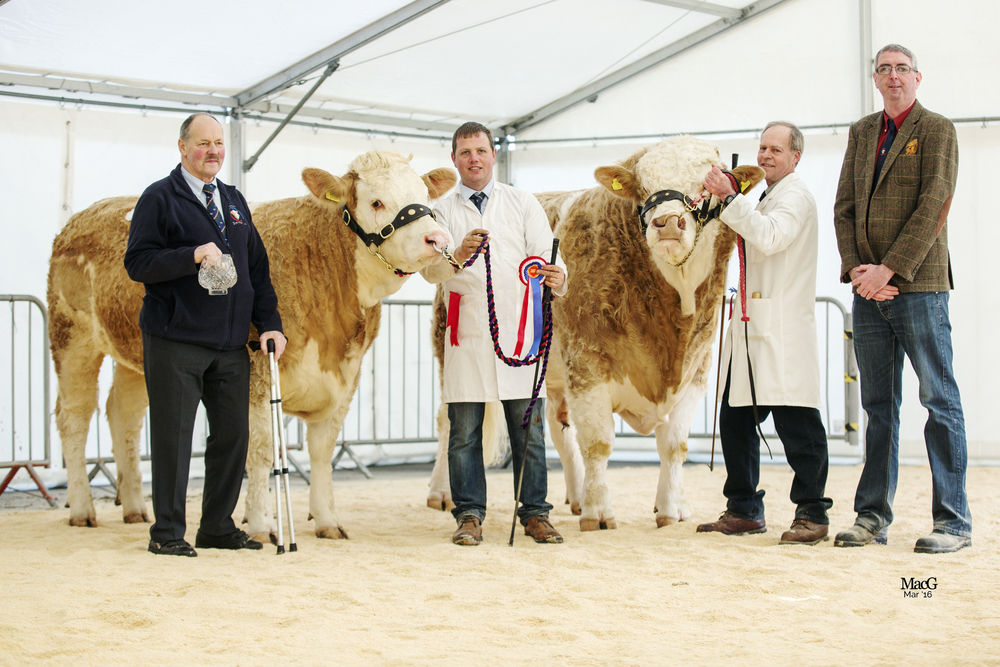