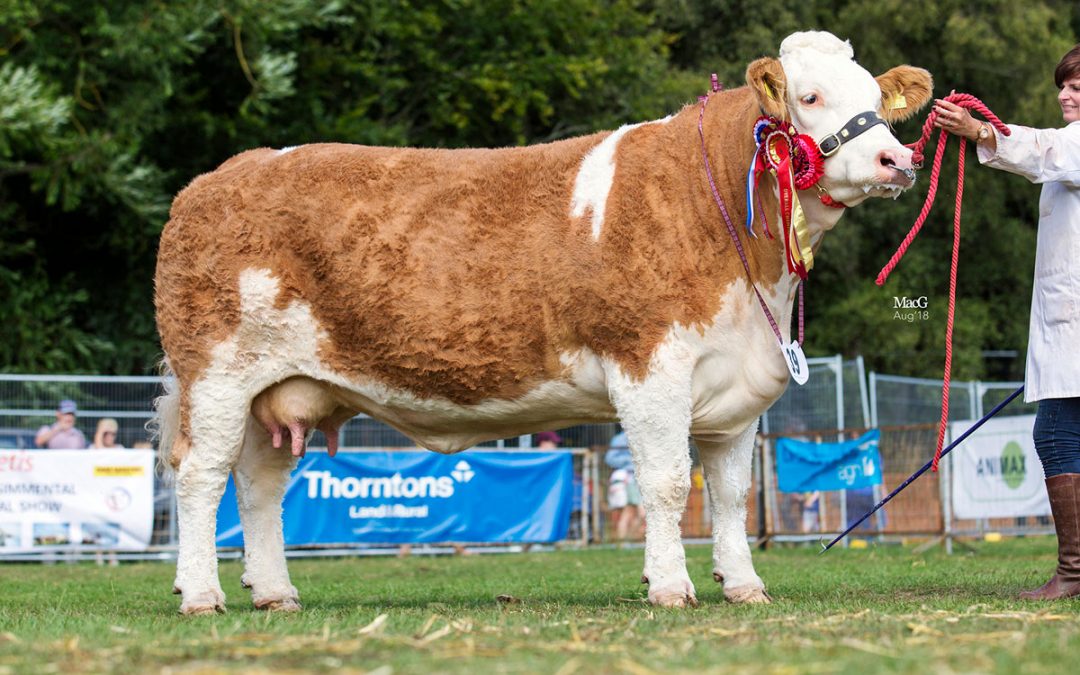 To start I’d like to thank the Scottish Simmental Club for the absolute honour and privilege of judging their National Show. The high standard of cattle put before me were an absolute credit to the breeders and the Simmental breed.

Class 1: Bulls born before 31/12/16. Quite a difficult class with three different types of bull. The first place for Curaheen Drifter, a well fleshed, long, deep bodied bull who moved very well on the day. Second was Newbie Mains Fame and Fortune, who on the day out powered Auroch Hudson who was giving away quite a bit of age.
Class 2. First was Blackford Iolair, a very big, growthy bull who was a different type to the second place Islavale Irish, a long fleshy bull who had plenty of breed character. Blackford Iolair then went on to be Reserve Male Junior Champion. Third was Pitmudie Inverurie, a deep, well fleshed bull, just lacking the length and power of the two bulls placed above him.
Class 3. First was Islavale Imperial, long, well fleshed, great movement and full of breed character, a bull which is going to have an outstanding future. He went on to be my Junior Champion and Reserve Male Champion. Second was Islavale Isaac, another good bull brought from the same stable. Well fleshed but on the day didn’t move as well as his yard mate. Third was Corskie Infinity, a good bull just lacking the flesh and power of the 2 bulls above him.
Class 4. First was Cairnorrie Irn-Bru, a good young modern bull, well fleshed for his age and another one to look out for in the future. Second was Woodhall Innerwick, another tidy bull but just lacked the flesh of the bull placed above him. Third was Blackford Island Legacy, a good calf but for me on the day just lacked the style of the 2 bulls above him.
Class 5. First was Islavale Emerald. From the moment she walked in the ring I knew she was going to take some stopping. A cow with amazing presence and full of breed character. Everything I looked for in a top class cow. She went on to be my Female Champion, then overall Simmental Champion and Reserve Interbreed Champion. Second was Drumsleed Farina, another wonderful cow put before me who on any other day would have been a worthy champion but unfortunately was just out powered. Drumsleed Farina then went on to be my Reserve Female Champion. Third was Drumsleed Gretel, another good cow working hard but just wasn’t as good on the plates as her stable mate on the day. Drumsleed Farina and Drumsleed Gretel also went on to be part of the best Group of Three animals and became Reserve Interbreed Group of Three.
Class 6. First was Pitmudie Havana, a very smart heifer, full of breed character and I’m sure she will become a good breeder. Second was Corskie He-enna, another cracking heifer who will also go on. Third place was Pitgaveny Gamble, another good strong heifer who on the day just lacked the condition of the 2 heifers above her.
Class 7. First was Blackford Hyalite, a super strong heifer with a super head and big ears to match. Full of breed character and a worthy winner of this strong class. Second was Corskie Herlande, another good heifer but a slightly different type to my winner but still I’m sure will become a very good cow. Third, Corskie Herb, another good heifer but in my opinion on the day a little shorter in length to her stable mate.
Class 8. First was Garmouth Dumandy’s Isabella. A tough class but Isabella was a rib longer and full of breed character to her class mates. She went on to be my Junior Female Champion and Reserve Junior Champion. Second was Corskie Inita, another sweet heifer who just lacked the length of the first place heifer. Third was Pitmudie Florin 2nd, another cracking heifer and very good on the plates.
Class 9. First placed was Islavale Illusion, a nice red, clean, long modern heifer who at an early age shows great promise. She went on to be my Reserve Junior Female Champion. Second place was Cairnorrie Clarissa 3rd, a nice heifer with good breed characteristics. Third place was Auchorachan Hilly, a lovely long heifer but on the day didn’t move as well as the 2 placed above her.
Class 10. Three lovely calves were put before me and in first place I put Drumsleed Janine, a super sweet calf who will hopefully follow in her dam’s footsteps. Second place was Islavale Jewel, a good red heifer but harshly lacked the width of Janine. Third was Quarryhill Jen, another super calf who has done well off her dam. I’m sure she will be in the show ring when she is older.
Class 11: Best pair for me on the day were Islavale Imperial and Islavale Irish who were a uniformed match. Long fleshy bulls with great potential.
Finally I would like to thank the Turriff Show for their hospitality, to Tom Henderson and his family and to Richard Pettit for all their organising which led to the smooth running of classes and Neil Shand for his class stewarding. 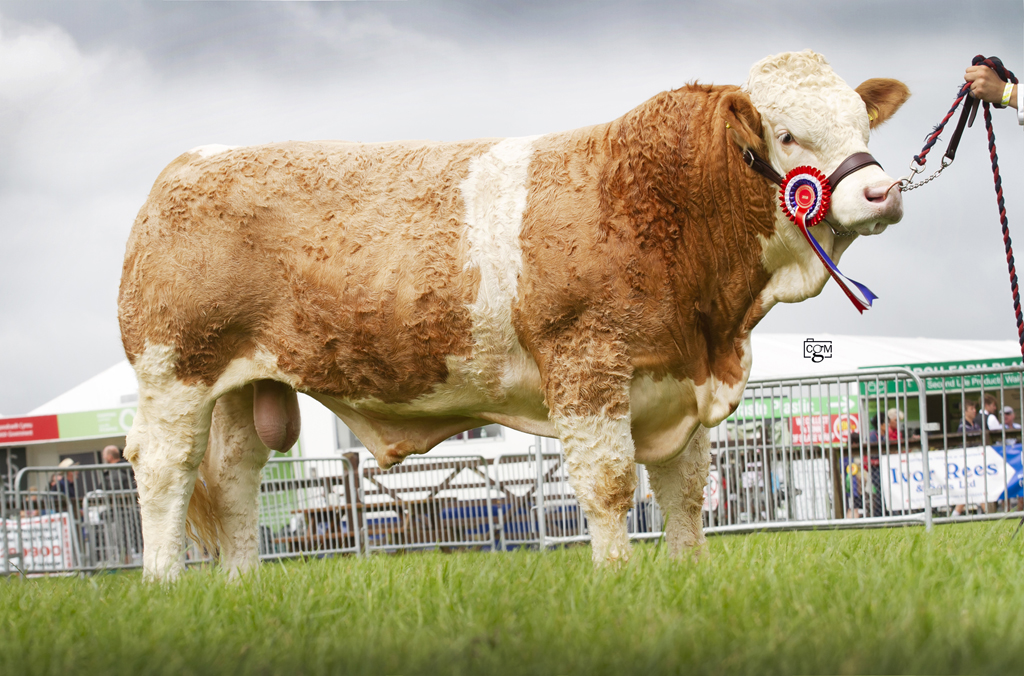