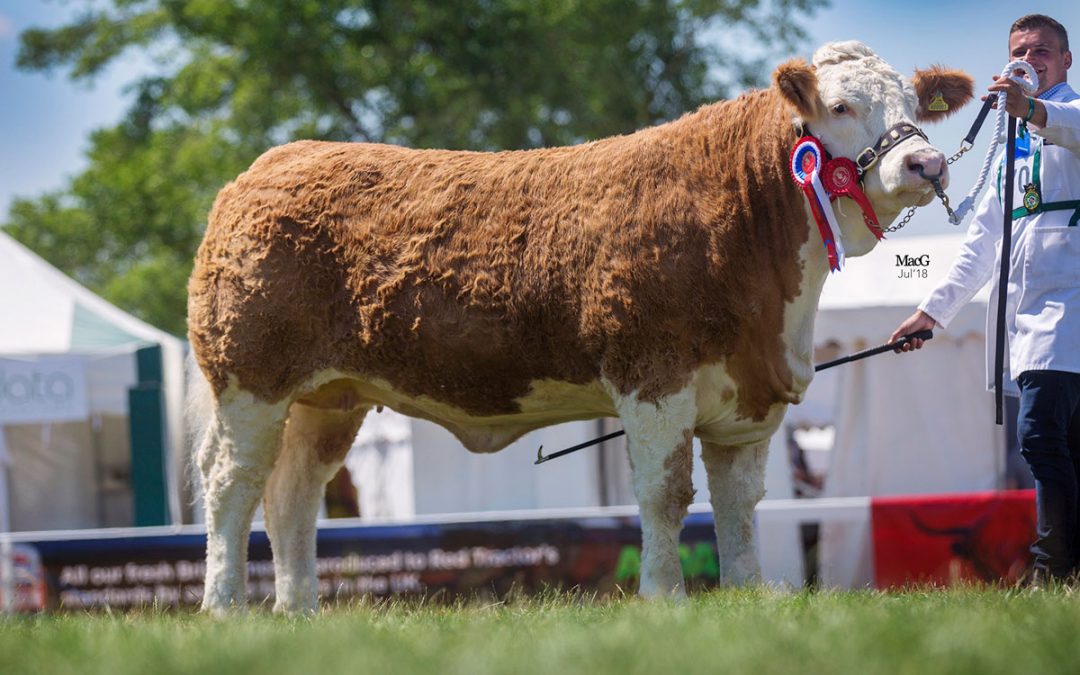 Sincere thanks to the Great Yorkshire show and the British Simmental Cattle Society for the invitation to judge the 2018 English National Show.
I would like to thank all the stockmen and stockwomen who put forward a tremendous show of Simmental cattle for me to judge.
The first junior heifer class was won by Chestermann Empire Stella, a very smart growthy heifer. Showing plenty of style, this is a difficult class to get a heifer ready for, very easy to overdo and basically almost killing them with kindness.
The second junior heifer class was won by Heathbrow Girlie’s Ivy, a very impressive heifer with plenty of ring presence, she moved well and was an easy winner.
My next class was won by a super heifer, I’m sure we will see a lot more of – Sterling Fcuk impuls, this heifer went on to be my Reserve Female Champion.
The next class was the Senior Heifer Class born April onwards. This was a difficult class to judge as it was just personal preference, as the top three heifers in this class was very different and could have been place differently with the judges. The class winner was Popes Princess Hettie, she had the most ring presence with a great body and natural width.
Next was a much improved class won by Popes Rhona who went on to be my Overall Champion, this was the strongest class of the day, the first place heifer was eye catching and stylish, I have to say she concerned me that she was over fat on her tail head, however after examining her I decided this felt more like she had banged herself. Because this was the strongest class, I need to mention the second-place heifer, this was Midhope Heavenly Light a big heifer, possibly the best bodied heifer, very good over her plates, however possibly due to an injury, her movement on the day was wrong which stopped her going any further.
This class led an easy winner, in Kennox Diva’s Gena, making a super job of her calf, this is what it’s all about. A very well made cow that just needed to be a bit bigger.
Her bull calf went on to win the best calf and I’m sure we will see him in the future.
Next class I couldn’t get wrong, was won by Woodhall Erica, a very correct cow, just lacked the style and presence to have pushed the champion aside.
Senior cow class was won by Sterling Petra’s Cairo, the biggest animal on parade, she was up there to win overall when standing, but with locomotion very important this was as far as she could go.
First of the bulls was won by Skerrington Iceman, he was an easy winner, very modern with natural width and a great top.
Next class was won by Williams I of the Tiger, a very stylish, clear bodied bull, lacked power to go further.
The intermediate bull class was won by Camus Harold
The senior bull class only had the one entry and was won by Curaheen Drifter, this bull carried his width all the way to his tail, he would later stand Reserve Breed Champion. I had seen the bull earlier in the year and actually thought he had improved as the show season had gone on.
Many thanks for affording me the honour of judging this show.